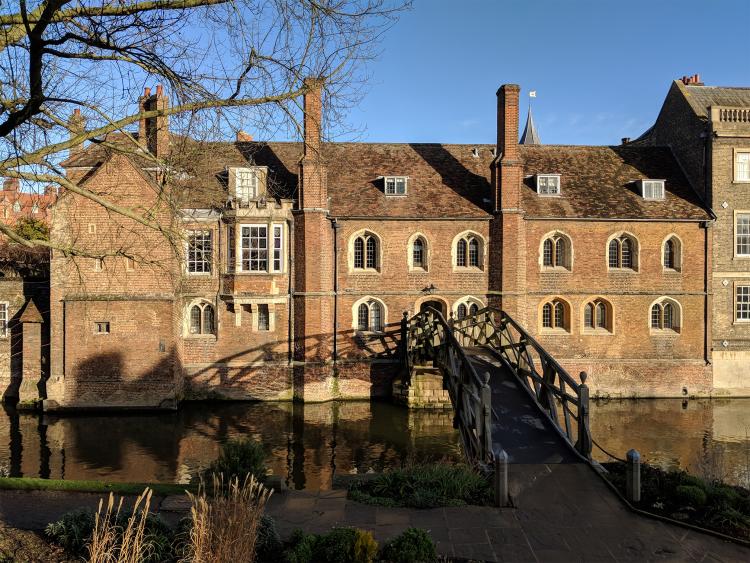 There is no contemporary record of the date of this building: the accounts books known as Magnum Journale do not start until the death in 1484 of the first President, Andrew Dokett, who seems to have administered the college himself, and left no records. Some writers referred to this building as coeval with the buildings of Old Court, others thought it slightly later:

The windows of the upper storey are exactly like those of the great quadrangle, and the building was probably erected very soon after that quadrangle was finished. [AHUC, Willis & Clark, 1886, Vol. 2, p. 14]

The first author to ascribe a date to the building appears to have been Atkinson, 1897:

Atkinson quotes no authority for this date. Later authors (including parts of this site) reproduce this 1460 date uncritically, but there really appears to be no evidence for it. The RCHM report [Vol. 2 p. 176] is more cautious:

It was built between 1448 and before 1494, probably shortly after the earlier date …

Externally, the first-floor bay window and the sash windows are later alterations: the RCHM report [Vol. 2 p. 176] considers the bay window stonework to be of the 17th century, whereas the antiquary William Cole reported that Henry James, President 1675–​1717, paid for the window glass and wood frame in 1711, the college paying for the stonework [quoted AHUC, Vol. 2, p. 27]. Roughly seven metres length of the southern end of this building were destroyed by the construction of the Essex Building, 1756–​60, just visible in the photograph at the extreme right. The two gothic windows in pink stone to the right of the bridge are alterations of 1911, when set Cloister 2 and adjacent toilets were altered.

Internally, the building is much altered from its original layout, and now comprises, on the first floor (left to right), firstly, rooms forming part of the President’s Lodge: the private Sitting Room (the single sash window), the Audit Dining Room (windows on either side of the chimney left of the bridge), the Breakfast Room (formerly the Servants’ Hall: two windows either side of the chimney to the right of the bridge), and finally the Cloister staircase landing (half-window and full window). On the ground floor: to the immediate right of the bridge is room Cloister 2, and then offices belonging to Cloister 1; and left of the bridge are kitchens for the President’s Lodge. The rooms in the attics are later additions, perhaps from the 1560s [Magnum Journale 1559–60 f. 271 et seq.].

The gable-end projecting into the river on the extreme left of the photograph served as a garderobe. The early stop to the original stone string, and the change of roof pitch, reveal that the garderobe was extended to the left (north) at some stage to accommodate a new chute from the attic level: the RCHM report estimates this extension to date from the 17th century [Vol. 2 plan opp. p. 168].

There is internal evidence of the riverside building having suffered a severe fire early in its life. The roof rafters become steadily more scorched from south to north until, just over the Audit Room, the scorched rafters are replaced with new wood. So it appears that the fire must have been serious enough to require part of the roof being rebuilt. There is no record of such a fire.

This riverside building was not originally part of the President’s Lodge. Pre-Reformation presidents, being single men in holy orders, had modest accommodation needs: they worked in the study above the Combination Room, and slept in the bedroom in the attic above that. The riverside building appears at first to have been used as a public reception place and guest rooms for visiting dignitaries. Willis & Clark, 1886, and Twigg, 1987, list such guests as King Henry VII and his queen (1497), Lady Margaret Beaufort (1505), Queen Catherine of Aragon (1521), and Cardinal Wolsey (1520). After the reformation, it became possible for Masters of colleges to marry and have families, often requiring expanded accommodation. Willis & Clark, 1886, estimate that parts of the riverside building became appropriated to the use of the President during the the reign of Henry VIII. The Long Gallery, connecting the original accommodation of the President with the riverside building, followed later that century.

One important function of this building has largely been ignored by historians. The presence of a garderobe has already been noted above; but this was no ordinary garderobe: it was a garderobe built directly over a river. In the centuries before the arrival of mains sewerage in 1896–​8, the river offered an easy means to wash away waste, and the position of this building on the river appears to have influenced the facilities provided for within the building. The 1886 plan of college [AHUC, Willis & Clark, 1886, Vol. 4, plan 15] shows, on the ground floor adjacent to staircase L (now known as Cloister staircase), three closets, probably reserved for Fellows, and possibly another two or three in the garderobe area, probably serving the President’s Lodge. Presumably all of these closets discharged directly into the river. The three Fellows’ closets each had a single-light window, which can be seen in the 1857 Cade photograph of the building. The three old closets were finally destroyed in 1911, when the internal arrangement of the area was changed. By taking some space from under the adjacent staircase landing, two new WCs (connected to the mains sewerage) were squeezed into the space of one former closet, while the space formerly occupied by the two other closets was incorporated into the set of rooms now known as Cloister 2. The three former single-light windows were replaced by two new double-light windows, one serving the newly created room for Cloister 2, and the other serving the two new WCs. These remained as WCs reserved for Fellows, with the locked door being opened by the same french night-latch key as opened the Senior Combination Room. Fellows were being issued with this strange key well into the 1980s. With the move of the SCR to Cripps Court in 1979, and the arrival of new public toilets as part of the Old Kitchens redevelopment in 1990–91, the demand for the old WCs diminished. At some point, the latch was pinned open, so that anyone could use them. Finally, in 2007, the WCs were scrapped, and the area became a photocopier room: a historic link with past purpose of location had been broken. 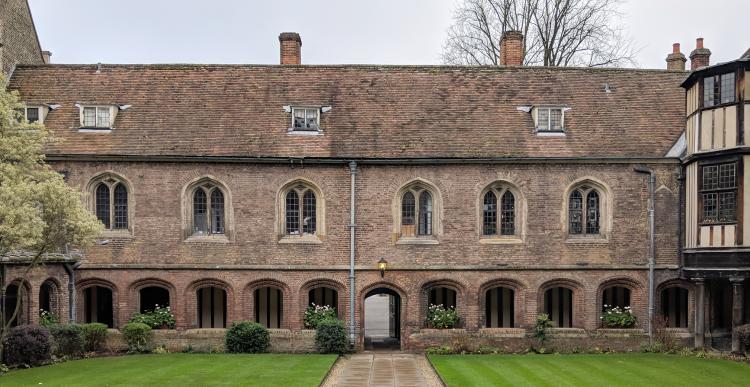 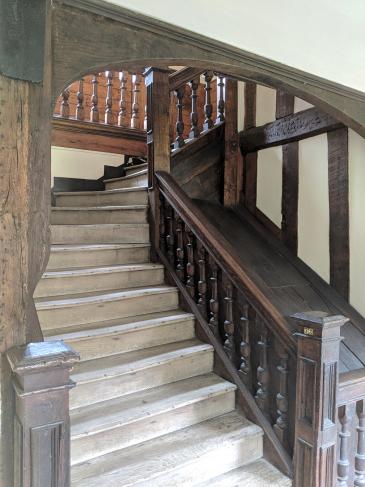 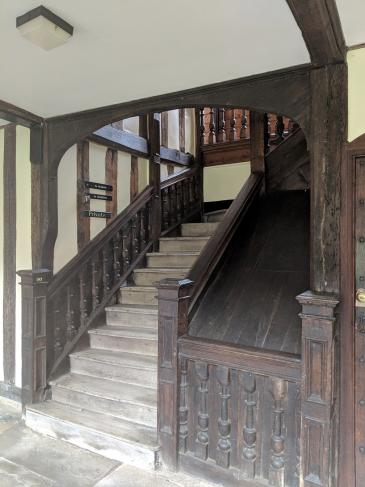 Two views of Cloister staircase, thought to be of the late 17th century.[RCHM]

The timber framed walls on each side of the staircase are original medieval work. Plaster was removed from these walls in 1983 to reveal the studs.

This staircase was known as staircase ‘L’ until the Erasmus Building took letters K and L in 1959. 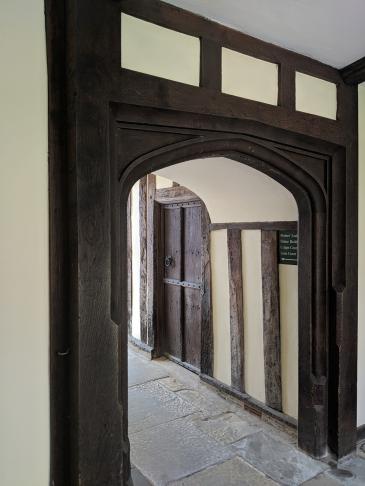 The passage through the centre of the riverside building to the Mathematical Bridge.

In 1985, the plaster was stripped from the right-hand wall of the passage, to reveal the studwork. This resulted in the discovery of a long-blocked doorway from the passage to the ground-floor kitchens of the President’s Lodge. By extraordinary coincidence, a redundant door to a larder at the north end of the building exactly fitted this frame, so the door was moved here. The former larder was incorporated into the Housekeeper’s flat as a bathroom.

The carved wood arch is probably quite modern.

Despite the frequent assertions by punt chauffeurs, there is no evidence of any connection between the blocked-up windows in the garderobe and the Window Tax: the story appears to be a complete fabrication.