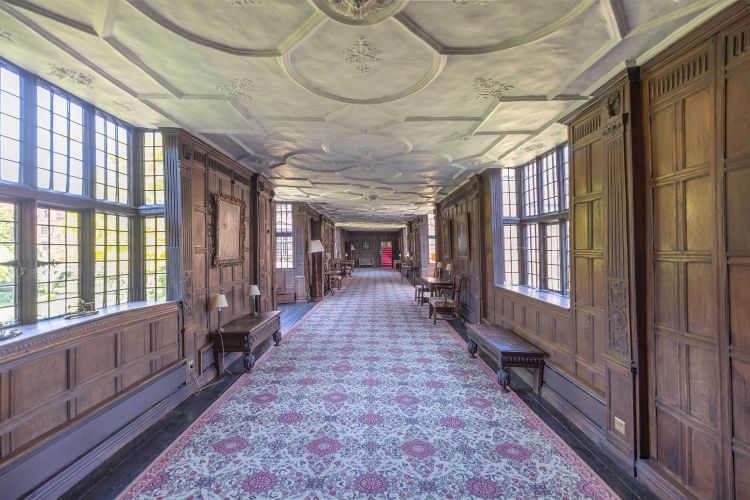 The college possesses remarkably little documentation about the origins of one of its most notable buildings.

A possible reason might be that much of the work was financed by the President of the time, out of his private means, and so never featured in the college Bursar’s records.

The internal panelling, at least, can be confidently ascribed to the period of Humphrey Tindall, President 1579–1614: he left it to the college in his will.

This view looks eastwards from the normal entry point for visitors to the Long Gallery from the main Lodge staircase. 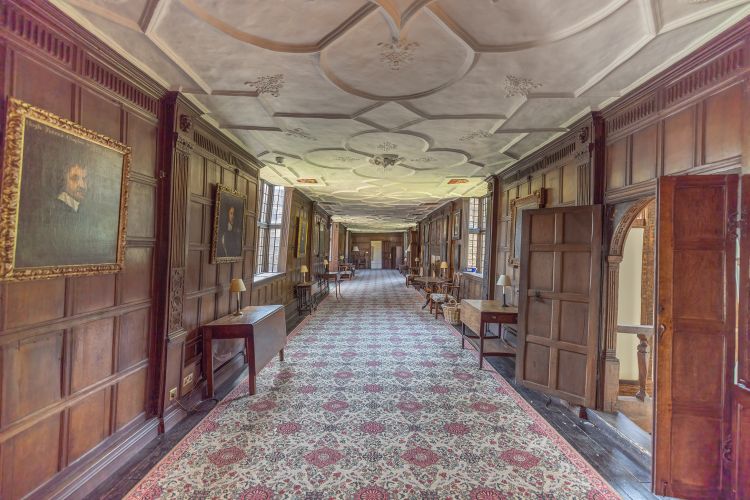 This view is in the reverse direction, looking west from a location close to the Essex Room.

On the left is a small collection of paintings from the Parliamentary period, including Cromwell and his associates. By contrast, portraits of the royal family are on the opposite wall, gathered around the fireplace.

On the right, the doors to the staircase down to the garden are shown open. The carved semi-circular frame to that opening appears to pre-date the panelling. 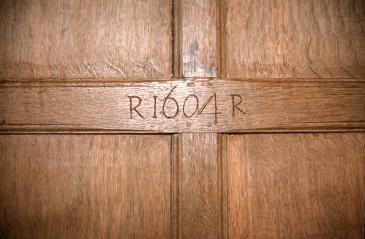 On the back of a panelled door at the east end of the gallery can be found the date 1604 scratched in the wood, suggesting that the panelling was in place by that date. 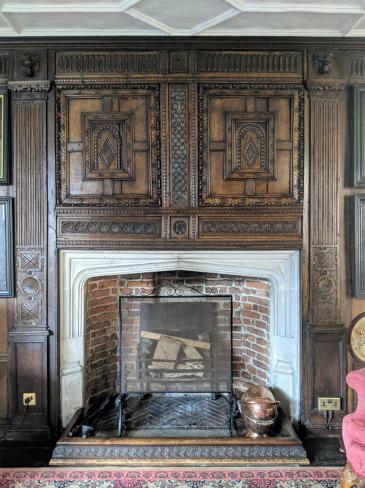 The panelling is at its most decorative above the fireplace. The fireplace itself was blocked by a stove heater until 1897, when central heating was installed, and the fireplace unblocked to reveal the present arrangement.

On each side of the fireplace can be seen examples of the fluted columns that break up the gallery panelling into bays. Each column has a lion’s head carving at the top. Just under the lion’s head is carved decoration which uses an incised letter ‘N’ as a repeated motif. It is not known whether this is intended to mean anything, nor, if so, what.

There appear to be two different designs of lion’s head around the Long Gallery. It is possible that they might represent two different periods of work, or repairs.

The large side-windows and oriel windows are, I assert, not original, but the panelling is designed around their presence, so the panelling must have been put up after those large windows had been inserted in an older structure. 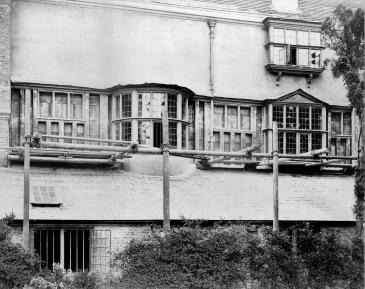 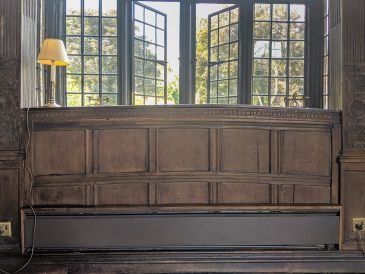 At intervals, the panelling has columns projecting slightly into the room, with a lion’s-head mask at the top of each column. These columns are (mostly) the locations of the primary load-bearing vertical posts of the building, which are of a larger section than the intermediate studs, and are supported by the outer ends of massive horizontal beams spanning the cloister below. It is to be noted that the westernmost window on the northern side severed one of those primary load-bearing posts (which supports the notion that the large windows were a later addition to the building). While the building around the window slumped downwards for lack of support, the stump of the severed primary post pushed upwards in the middle of the window sill, which is now visibly distorted.

The two decorated columns on each side of this window are examples of columns which are not the site of primary load-bearing vertical posts.

The Long Gallery was shortened slightly by the building of the 1791 main staircase, which intruded into the north-west corner of the timber structure. The gallery was re-balanced by shortening it an equal amount on the south side by erection of an internal partition. In the resulting cupboard can be seen a length of lost side panelling painted an arsenic green. The paint was removed from the panelling in the Long Gallery in 1857. [AHUC, Vol. 2, p. 28n] 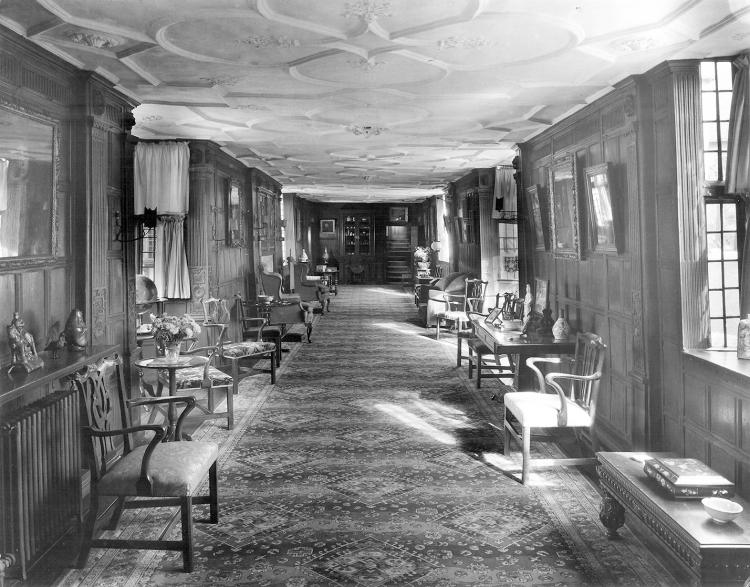 The prominent cast-iron radiators and shelves visible in this photograph (ca 1948–50) were installed in 1897–8 when a boilerhouse and central heating were installed in the Lodge: the radiators were removed in 1983–4 in favour of skirting heaters running at lower temperatures. 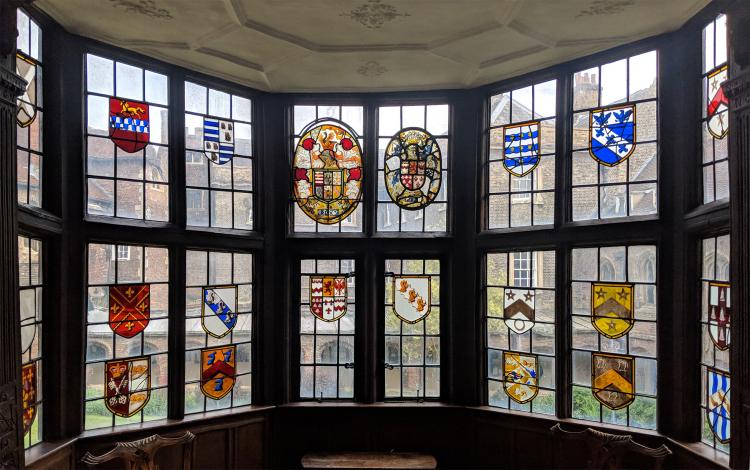 Although there are two older pieces of glass in the centre of the oriel window, most of the stained glass coats of arms in the windows were moved here around 1846–54, having previously been erected in the Hall 1819–22. The moved glass was by Charles Muss, the majority being the arms of former presidents. At first, this moved glass was hung from wires inside the windows. Photographic evidence suggests that at some point between 1952 and 1959, the leaded lights were re-made with the stained glass integrated.

The arms of the Presidents missing from this sequence, being those who served also as Bishops, are displayed in the bay window of the Audit Dining Room. Also missing are the two Presidents of the commonwealth period, between the two presidencies of Edward Martin.

A number of errors in this heraldry require discussion, not least because those errors have propagated from here to other locations:

The oval arms of the college dated 1589 are similar in design concept to the oval arms of Robert Devereux, 2nd Earl of Essex, on display in the Essex Chamber, so they might originally have been a pair. These oval arms of the college were found smashed the morning after a student demonstration in Cloister Court held at 2 a.m. on 1969 November 30, protesting about guest regulations [CM 266; GB Minute VI of 1969 December 5; Cambridge Evening News No. 24944, 1969 Dec 1, p. 12]. No evidence was found that the demonstration had been responsible for the damage. According to oral tradition, the damage was caused by a snowball. After repair of the pieces that could be salvaged, the stained glass now hangs in its own frame, behind plain glass in the external window.

The ceiling was originally plain flat plaster on rushes. In 1923, the current ceiling of decorated plaster was put up to the design of Cecil Greenwood Hare, architect. The design was inspired by that of the ceiling of the Long Gallery at Haddon Hall, Derbyshire. In the 19th century, Professor Robert Willis had pointed out that the ground-plan of Queens’ College was similar to that of a secular manor house (rather than, say, a monastery), and, in particular, to that of Haddon Hall. The new ceiling of 1923 artificially reinforced that resemblance. The architect wrote:

The new plaster ceiling is designed to harmonise with the old world atmosphere of its surroundings. Although not a slavish copy, it is founded on similar lines to the fine ceiling in the long gallery at Haddon Hall, Derbyshire. The ceiling is divided by moulded single ribs into large quatre-foil panels having modelled terminal sprays. In the centre of the panels are enriched bosses, or pendants, and Coats of Arms are arranged in the panels at intervals.

There were Coats of Arms embedded in the ceiling:

These, eight in number, arranged in four pairs, are:
(1) Those of the two Foundresses.
(2) That of Andrew Dokett, the first President (1448), and that of Robert Bekenshaw (1508), President when a gallery was built. [The arms shown for Bekenshaw are erroneously those of Grey/Booth: an error that seems to have been inherited from stained glass in the Long Gallery and in the Old Hall]
(3) Those of Simon Heynes (1528), and William Mey (1537), Presidents when the Gallery was built. [These mistakenly rely on the dating of Willis & Clark, which is no longer supportable]
(4) That of Humphrey Tyndall (1579), the President who put the panelling in the Gallery, and that of the present President to give the date of the new ceiling (1923).
[The New Ceiling in the Gallery of the Lodge, by T.C. Fitzpatrick, in The Dial, No. 48, Easter Term 1924, p. 19]