The scenes depicted in each panel are:

The reverse sides of the panels

On the reverse of each panel, there are depictions of saints:

They now suffer from considerable loss of paint, but have been stabilised as seen above. These panels have not been seen since 1993.

The wood panels are probably the remnants of a much larger altarpiece. This belief stems from (a) the panels being painted on both sides; and (b) the panels being similar to double-sided painted panels on other known early Flemish altar-pieces, such as:

Chronology of the panels

It is not known for certain how and when the triptych panels came to the College [but see Woods 2002]. It seems improbable that, had they been in college then, they could have survived the visit of the iconoclast William Dowsing in December 1643. The earliest reference to the triptych so far found is in an inventory of the Long Gallery taken in March 1717: [QC Old Lib MS75 p. 144]

A Picture of the Passion of our Sav.

In his notebook for 1741–52, George Vertue recorded seeing:

Cambridge At Queens Coll. in the Masters Lodge large flat paintings in oyl after the manner of Albert Dure representing several of our Saviours Miracles. [1938 p. 19]

It seems by no means an ill-founded conjecture that the picture in Queen’s lodge was given by the foundress of the college, Margaret of Anjou, the daughter of king Renè, and wife of our Henry the Sixth, to ornament the chapel; but on the overthrow of the Catholic religion, when pictures were no longer allowed in the chapel, was removed to the lodge. [Plumptre, 1810, Vol 2, pp. 341–​2]

Her speculation was reproduced uncritically by subsequent historians, but unfortunately her conjecture was completely ill-founded: the panels are now considered to have been painted long after Margaret has been deposed from the crown, and possibly even after her death in 1482.

A curious Altar Piece from the Chapel in 3 Pannels, Judas betraying our Saviour, the Resurrection, and Christ appearing to the Apostles after the Resurrection. … These Pictures are very much in the style of Martin Schoen, they are in the highest possible preservation, and are a most invaluable curiosity [1790, p. 20]

This text, and its suggested attribution, were reproduced uncritically in subsequent guide-books and histories. For the reason given above, it is improbable that the triptych panels were in the old college chapel.

The triptych was incorporated into the reredos over the altar of the new college chapel by architect George Frederick Bodley in 1891.

In the Illustrated History by Browne & Seltman, the attribution to Schoene was doubted [1951].

In 1982, when one of the panels was taken down from the reredos for conservation, the paintings on the back of the panels were re-discovered. The subsequent investigation led to the re-attribution of the panels to the “Master of the View of Sainte Gudule” [1983; 1988; 1991].

In 1993, after the panels had been restored, they formed the centrepiece of the ‘Splendours of Flanders’ exhibition in the Fitzwilliam Museum, where it was possible to see both sides of the panels for the first, and only, time.

Altarpieces with similar panels by the same artist

These altarpieces provide a guide to the possible design of a former altarpiece from which the three panels at Queens’ survive.

The “Flemish Altarpiece” at the Bowes Museum.

Bowes Altarpiece with side panels open. 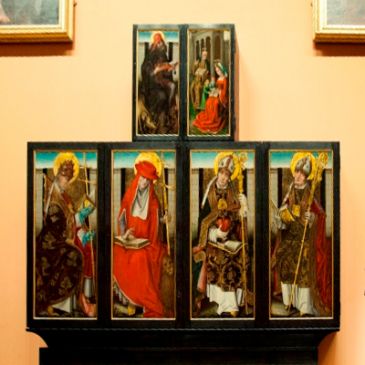 Bowes Altarpiece with side panels closed.

The “Altarpiece of the Passion” at Sint-Dimpnakerk, Geel, Belgium 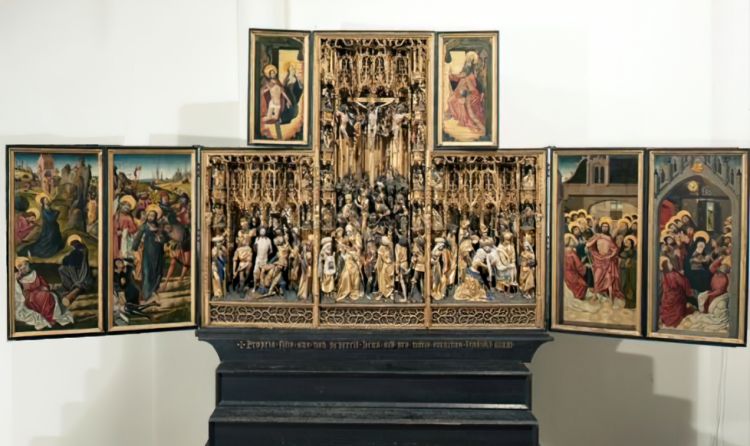 Geel Altarpiece with side panels open 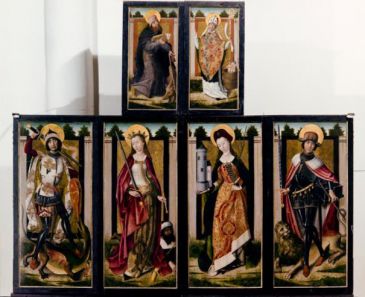 Geel Altarpiece with side panels closed

The first three of these saints are the same saints as depicted at Queens’, in different poses.

A conjectural outline of the altarpiece from which the Queens’ panels survive, based on similar Flemish or Netherlandish altarpieces: 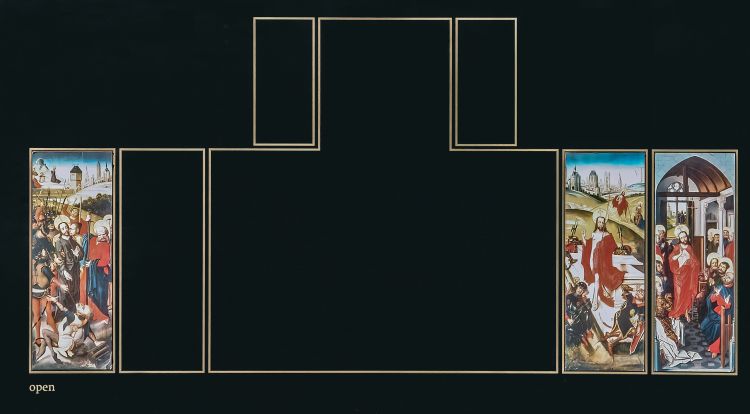 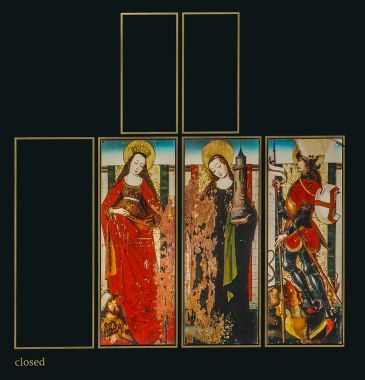 Research by Jean Michel Massing and Hélène Dubois. Panel restoration by the Hamilton Kerr Institute. Photography of the panels by Christopher Hurst on 5″ × 4″ colour transparencies, ca. 1993. Digitised and colour-corrected by Robin Walker 2021.

1790: A catalogue of the several pictures in the public library and respective colleges, in the University of Cambridge, by A Gentleman of the University, p. 20. (OCLC 390916796)