In the Long Gallery of the President’s Lodge, is an interesting long-case clock of the 17th century.

The case of the clock immediately below the dial-plate has a label bearing the text:

The clock is not in its original condition. It was originally a lantern clock, not a long-case clock. In an earlier condition, it might have been able to strike the minutes on a small bell, as well as the hours. At some stage, it was enclosed in the present case and hood, and the original dial-plate replaced with the current square one, with new hands. Also, at some point, it was converted to an anchor escapement with a long pendulum, from an earlier design. Although the label is now attached to the wooden hood, as recently as 1950 it was riveted to the top of the dial-plate. In 2007, the striking weight was reduced from 16 lb to 8 lb, and the going weight from 12 lb to 5½ lb, to reduce wear on the clock mechanism. 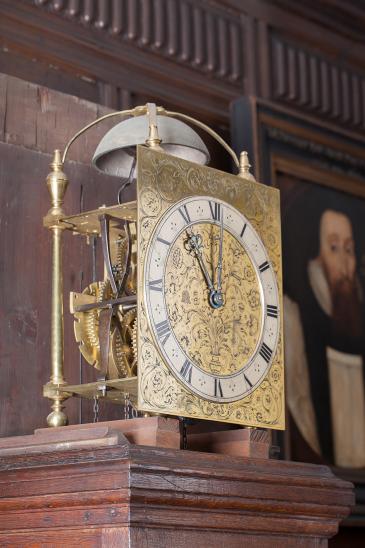 Left: A view of the clock with hood removed.

Below: The label on the case. 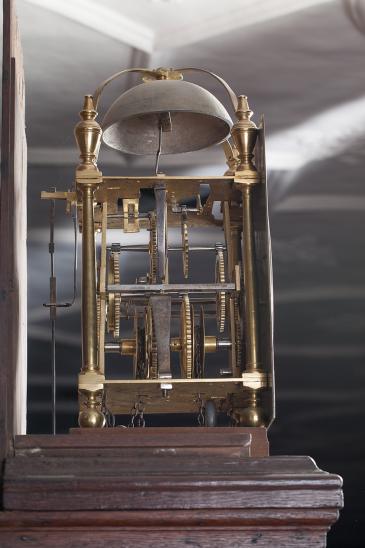 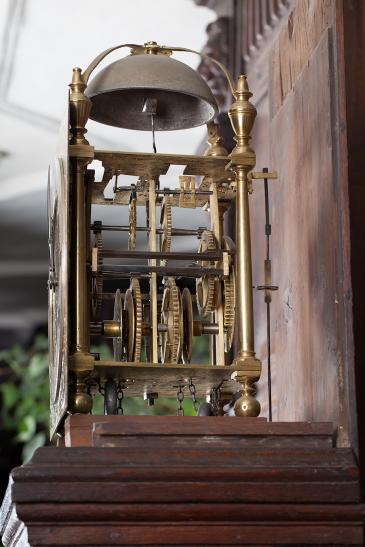 Views of the mechanism from each side.

Edward East and the Swan with Two Necks

There is no record of why East was motivated to give the clock to the college. East was the owner of The Swan with Two Necks, a coaching inn at Lad Lane, now Gresham Street, London. Since 1607, that property had been liable to two rent-charges, each at £5 per year: one to Brasenose College Oxford, and the other to Queens’ College Cambridge. These rent-charges had been set up in the will of former owner James Stoddard, in order to found scholarships at the two colleges. Subsequent owners of the property were liable to pay those rent-charges to the colleges in perpetuity. There is a discrepancy in the historical record in that East’s will (dated 1688, proved 23 February 1696/97) refers to the payment to Queens’ being only £2 12s. per year, rather than £5, while the Brasenose payment continued to be £5.

On 24th March 1664, Edward East leased the Swann with Two Necks in Ladd Lane to John Ashborne, citizen and innholder, for 41 years for a fine of £200 and a rent of £52 a year. Lad Lane was well within the area consumed by the Great Fire of September 1666 and the inn was destroyed. On 14th January 1667, Ashborne applied for a new foundation to be set out. In the reports of the Fire Court for 1667, there is a petition by Ashborne against East alleging that East had refused his proposals for rebuilding. East appeared on summons and informed the court that there was payable out of the messuage £5 p.a. to Brazen Nose College, Oxford, £5 p.a. to Queens’ College, Cambridge and 40 shillings p.a. for a sermon in the Church of St Martin, Ironmonger Lane [all as set up in Stoddard’s will]. East said that he had refused the tenant’s offer to contribute £600 to the rebuilding. The Fire Court held that Ashborne should rebuild and have his term increased and his rent abated. It was decreed that Ashborne should pay East two months’ rent for the Michaelmas quarter 1666, after deducting Landlord’s taxes, and surrender the lease. In return Ashborne was to receive a new lease for 61 years from Lady Day 1668 at a reduced rent of £40 a year, the first payment to be made on Lady Day 1669, provided that he rebuilt another inn and messuage with all convenient speed. The new inn soon prospered.
[The Swan with Two Necks, by Foster Ferrier Harvey Charlton, Linklaters & Paines, 1987]

1950: Description of Clock presented to Queens’ College Cambridge in 1664 by Edward East, by Herbert Alan Lloyd.