Erasmus’s Walk was formerly a footpath along the northern edge of Queens’ Green, in an avenue of trees. 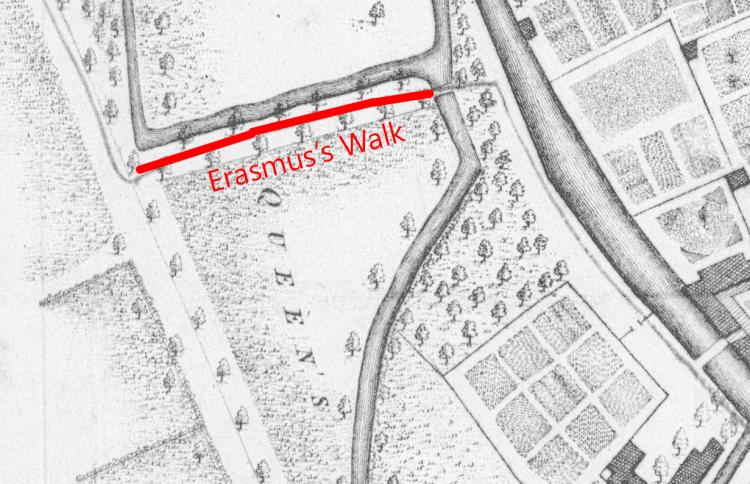 In December 1684 the college accounts record:

According to the manuscript history of the college by Dr Plumptre, President 1760–​1788:

The walk call’d Erasmus’s walk was (I believe) first made … in the year 1685.[sic, actually 1684] For in the Accounts of that year it is spoken of as made and as planted, not replanted; and King’s College was at the expence of planting the side next the ditch, Queens of that next the Common. The title was probably given it therefore in honour of that distinguish’d Member of the College, rather than on account of its being a favorite walk of his. If it was so, he enjoy’d I doubt no other shade here than what arose from the adjoining Grove of Kings College; for I find no direct mention, nor any thing which may seem to imply the plantation or forming of any walk here till this time.
[Plumptre’s History, quoted by AHUC, Willis & Clark, 1886, Vol. 2, p. 58]

The walk stretched from a small bridge across Queens’ Ditch, from the northern tip of the Grove to Queens’ Green, alongside the east-west ditch between Queens’ Green and King’s College land, to the road along the Backs. The bridge across Queens’ Ditch, if it did not already exist, must have been made at the same time. The bridge was shown on Loggan’s plan of 1688, but not in Hamond’s plan of 1592. The walk and bridge are shown here on the plan by Custance, 1798, complete with avenue of trees on both sides.

In 1779, the town corporation ordered the avenue to be cut down and sold:

The Corporation ordered the trees on Erasmus’s walk at the north end of Queens’ Green to be sold, but the University paid £50 to preserve them.
[Annals of Cambridge, by Cooper, Vol. IV, 1852, p. 389]

The Grace of the Senate recommending the University’s intervention was dated 26 February 1779: it mentioned not only the sum of £50 but also an annual rent of one shilling. The Grace also recorded the belief that Erasmus himself had indeed walked that way. The trees were reported to be still standing in 1886.
[AHUC, Willis & Clark, 1886, Vol. 2, p. 770]