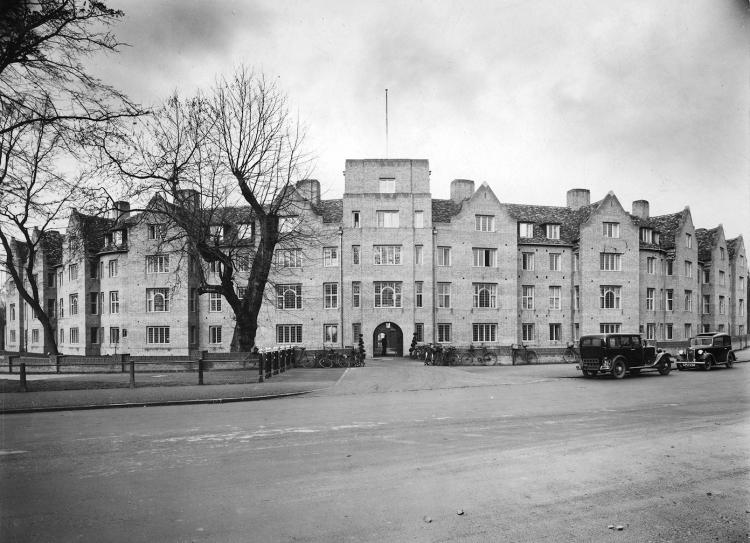 Fisher Building was erected 1935–6 to the design of George Carr Drinkwater (1880–1941), architect. The contractors were Coulson & Son. The cost was about £50,000. Fisher Building continued the Queens’ tradition of using red brick. The window-frames are of teak, and all internal woodwork is oak. It was the first student accommodation in the college to lie west of the river. It was also the first building in Queens’ to have bathrooms and toilets on the staircase landings close to the residential rooms (rather than outside, or in the basement, as in Dokett Building). Fisher Building originally comprised 82 two-room sets on five staircases (T, V, W, X, Y), each of four floors, each floor having four sets. Staircase W in the centre is slightly grander, having 5 sets on its upper floors. The sets were intended for single occupation, but many became shared by two students during the Second World War, when the pre-clinical class of St Bartholomew’s Medical School were evacuated from London to Queens’. Except in the attics, each of the sets is still shared by two undergraduates, usually second year undergraduates. The attic sets remain in single occupation.

The building rests on a concrete raft supported by 120 piles. Part of the building lies on the site of the former stream parallel to Silver Street that used to connect the main river with the ditch round the west side of College. Originally, Silver Street (then called Small Bridges Street) was a causeway surrounded by water on both sides: there was a bridge across the stream on the northern side of the road to reach the stable yard of Queens’. That stream appears to have been filled in around 1841. The foundations of the old bridge were re-discovered when excavating the foundations for Fisher Building.[Browne & Seltman, plates 16 & 120]

The Fisher Building project included the erection of a separate building containing two squash courts and some garages, and the conversion of an old stable/coach-house block to become the Fitzpatrick Hall. Both these buildings were demolished as part of the site clearance for Cripps Court.

… the proportions of the new Queens’ building are by no means beautiful; from certain aspects, such as the end-on view, they are hideous.

… is there some lacuna in Cambridge culture that leaves us blind to the visual arts?

… the Backs, and here in 1935–​6 Norman [sic]Drinkwater put up Fisher Building, looking exactly like a friendly block of flats at, say, Pinner. Its Tudor style is not positively offensive, and the broken shape round the corner into Queens’ Road helps it. But the fact remains that the college wasted a great opportunity here for a good contemporary building. It would in no way have interfered with existing collegiate structures of the past. So why should a timidly imitative style have been preferred?
[Ibid, pp. 138–​9]

The Tudor brickwork of Queens’, with its warm and massive enclosure, has been an inspiration to recent Cambridge architects …. It has also presented a great temptation to dabblers in the picturesque, such as Drinkwater, who designed the terrible Fisher Building of 1932 [sic].
[Cambridge New Architecture, by Nicholas Taylor and Nicholas Hughes, 1964 p. 27, 2nd edn 1965 p. 27, 3rd edn 1970 p. 41]

The Fisher Building … suggested that dons’ committees could not be trusted with aesthetics.
[After Gropius Was Rejected, by Peter E. Clarke, in The Times Literary Supplement, No. 624, 1964 July 16, p. 624]

… the Fisher Building of Queens’ College—probably the worst building to be constructed on a prominent site in Cambridge for a couple of generations.
[Revolutionizing the social life of Cambridge, by James Maude Richards, in The Times, No. 57092, 1967 Nov 7, p. 4]

The large Fisher Building of Queens’ College on the west bank of the river is an ambitious building constructed in a Jacobean Revival style using red brick that helps to unite it with the older college buildings. It presents a long, curving frontage to the road punctuated by the gabled returns of forward breaking bays. The building stands back from the road behind railings and a hedge, providing overlooking but little other interaction, which at this point helps to promote a more relaxed open townscape as the definition of the urban spaces breaks down towards the more open common land to the west.
[Historic Core Appraisal 2016: Silver Street, by Cambridge City Council] 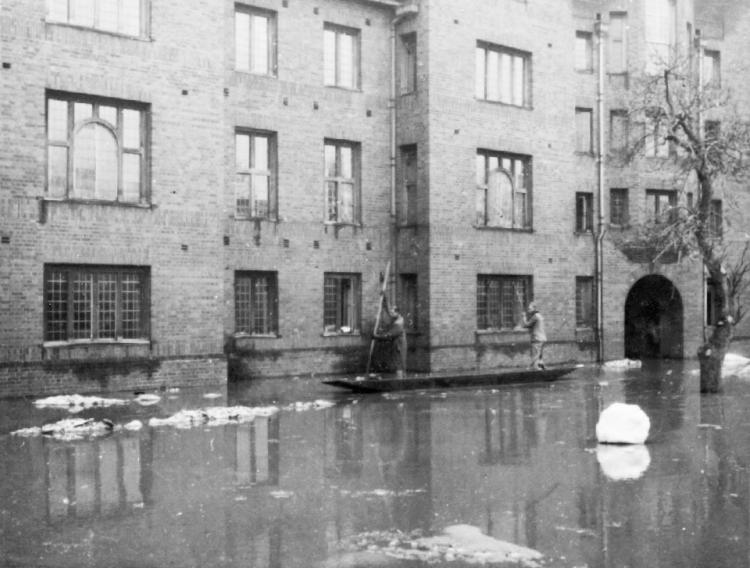 In the floods of February 1947, the entire ground floor of Fisher Building was under water.

The railings and gateway with brick pillars along Silver Street and Queens’ Green were erected in 1994–​95 to form a secure boundary to the college site. Before the 1970s, site security had been provided by wrought-iron gates from Y staircase to the ditch, but those gates had been removed to provide contractors’ access for the Cripps Court development.

In 1998, the sets on V staircase (except the attics) were fitted with en-suite WCs and showers, and the space thereby released by redundant toilets and bathrooms on the staircases allowed the gyp-rooms to be expanded and modernised. In 1999, the same was done on X and Y staircases. W staircase followed suit in 2000, and an enhanced accessibility set was created in W1, with ramped access at ground floor level in the W archway. The en-suite conversion of T staircase was delayed until the redevelopment of the Porters’ Lodge in 2012.

In stages between 2010 and 2013, the entire building was fitted with secondary glazing.

In 2012–​13, the Porters’ Lodge of 1974 was remodelled and extended into a new building which also provided a cloister-like covered connection to Cripps Court.

It was not recorded how the architect George Carr Drinkwater became associated with Queens’ College. The college’s previous architect, Cecil Greenwood Hare had died in 1932, so a new choice was needed. Drinkwater had written books on rowing and the University Boat Race, and was a former rower himself. Archie Browne [obit Record 1978, p. 8], Fellow of Queens’ at the time, with a great interest in the college buildings, was also a rowing enthusiast. Is it possible that their common interest brought them together?

Drinkwater’s name first appears in college records as a coach for the Boat Club. In 1933 he was paid for some cleaning or maintenance of the college pictures. In 1934 he was architect for the reconstruction of the internals of E staircase, Old Court.

Demolished 1935: the buildings on the site before Fisher.