The President is the head of Queens', and lives at the heart of the College, overlooking the river Cam, in the President's Lodge. 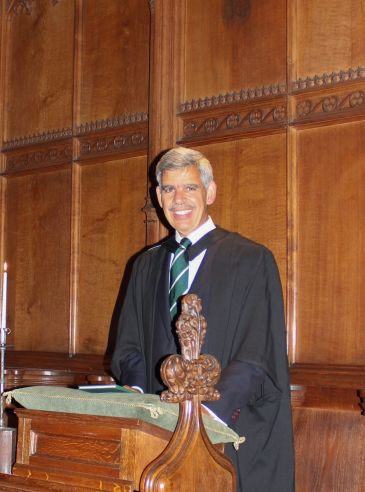 Our President, Dr Mohamed A. El-Erian, was installed on 30th September 2020. He is an economist with an undergraduate degree from Queens' and a DPhil from Oxford. He has previously been chair of President Obama’s Global Development Council, a Deputy Director at the International Monetary Fund, CEO and co-CIO of PIMCO, and President of Harvard Management Company. Throughout his career, Dr El-Erian has been involved with universities and think tanks around the world, including as the Rene M. Kern Professor of Practice at The Wharton School and Senior Global Fellow at the Lauder Institute (University of Pennsylvania).

The President chairs meetings of the College's Governing Body, which manages and directs the policies, activities, and day-to-day running of the College. He also chairs and directs many of the other committees and groups responsible for the care, development, and management of the College. Dr El-Erian represents the College's interests at various levels in the University, and occupies a particularly important role in the lives of Queens' undergraduate and graduate students - it is by his authority that students matriculate at Queens' College, and it is by his hand that they receive their degrees at graduation.

The El-Erian Institute of Behavioural Economics and Policy was proposed in 2015 by Dr Mohamed El-Erian (1977), whose generous investment initiated groundbreaking research in this area. In 2022, the El-Erian Institute opened at Cambridge Judge Business School under the supervision of the Academic Director Professor Lucia Reisch, the inaugural El-ErianProfessor. Read more about this intellectual hub.

The entrance to the President's Lodge is on the old side of College.  Go over the Mathematical Bridge, turn left and it's the large black door in front of you.

pres.sec@queens.cam.ac.uk
PA to the President and Manager of The President's Lodge