Coat of Arms in Old Court 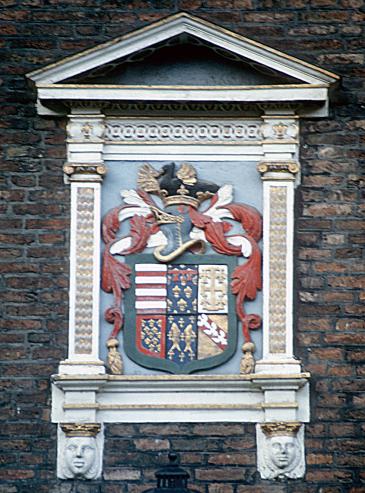 In May 1575 Robert Cooke, Clarenceux King of Arms, formally granted arms to the College. His stated intention was to confirm the college’s right to bear the arms of Margaret of Anjou, the first foundress queen, but he made some mistakes in describing Margaret’s arms, and also granted some extensions (border, helm, crest, mantling) which were not in the original.

Within a few weeks, the college started creating this representation of the granted arms, carved in stone, and erected over the entrance to the dining hall.

This photograph was taken in 1986, before the first quarter (arms of the Kingdom of Hungary) were repainted with the colours incorrectly reversed, a state in which they remain to the present time of writing (2016).

The college account book, Magnum Journale, records these works in the academic year 1574–75:

In the second quarter (top centre), the college now paints the label red (gules) rather than silver (argent), as mistakenly blazoned by Robert Cooke. The arms of the Kingdom of Naples (or Anjou Ancient) should correctly be shown with a red label.

In the fifth quarter (bottom centre), the crosses crosslet are shown as not being fitchy, following the similar incorrect blazoning of Robert Cooke: the arms of the Duchy of Bar should correctly be shown with crosses crosslet fitchy.

One assumes that the two brackets depicting crowned female heads are references to the two foundress queens, though there are no specific identifying features.

The payments in the accounts to Theodore presumably refer to Theodore Haveus, of Cleves, who was active in Cambridge at the time, especially at Gonville & Caius College.

The Heraldic Arms of Queens’ College