From the earliest days of the college, there used to be a bell-tower for the Chapel attached to the north side of the north range of Old Court. It can be seen in the 1685 view by Loggan.

From at least 1538 onwards, the bell-tower also displayed a sun-dial, and at some date the sun-dial was replaced by a clock.

In 1804, the bell-tower became structurally unsafe, and was demolished:

Agreed that among the other repairs of the College, the tower containing the bell and the clock, being now in considerable danger of falling down, requires immediate attention, and that the necessary works in the way of alteration or repair be done in the ensuing summer under the inspection of the Bursar.
[College Order, 1804 June 15, quoted AHUC, Vol 2, p. 50 n4]

The clock and bell were transferred to a new tower on the roof of the Library: that tower can be seen in the print below.

In 1805, a new building (which now contains the Old Library staircase and offices) was erected close to the site of the former bell-tower. [AHUC, Vol 2, pp 50–51] The 1805 building is notable for the first re-appearance of gothic windows at Queens’ after the classical period of the 18th century. We do not have much information about the internal layout of this building as it was when first built: it was extensively altered around 1840. 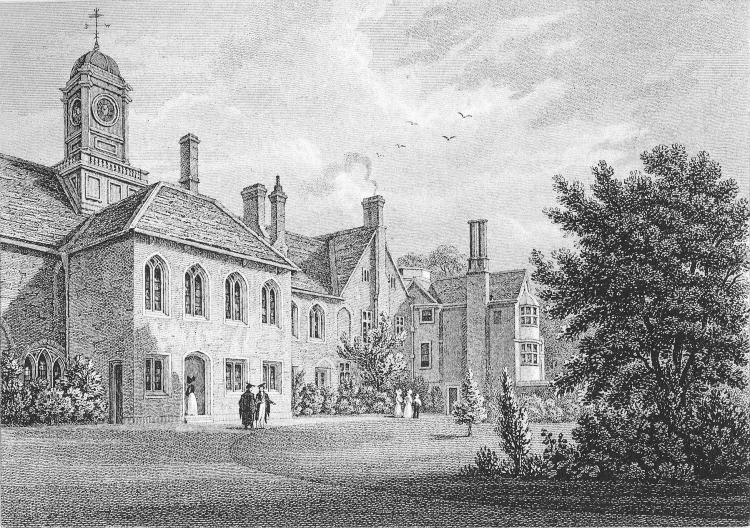 1829-32: View looking south-west drawn and engraved by James Storer and Henry Sargant Storer. Published in Illustrations of the University of Cambridge (second series) in part form 1829–1832.

Buildings visible are, from left to right: 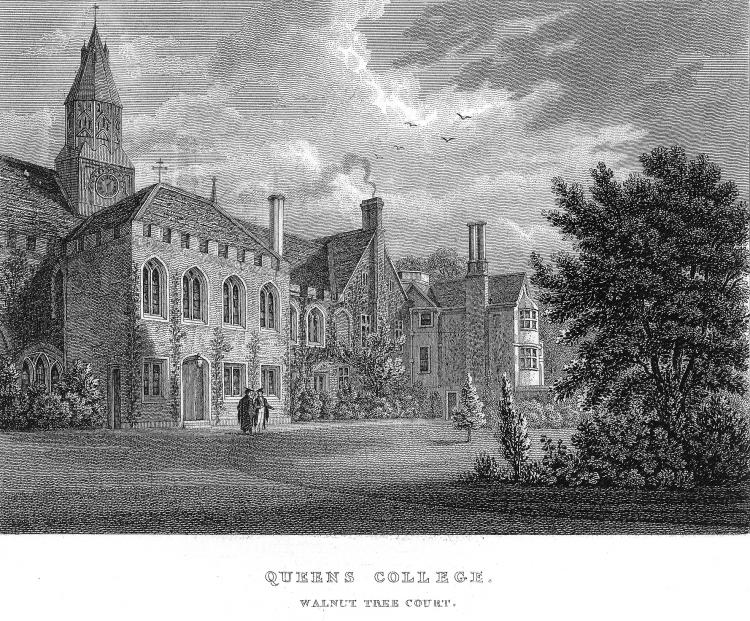 After 1848: an example of a steel plate being altered to show changes in the buildings. This second version is of uncertain date, but after the clock tower of 1848. It was used in the revised edition of Memorials of Cambridge by C.H. Cooper published 1860.

On close examination, the ghostly remains of details that have been scraped away are visible.

The alterations apparent in the second version are, left to right:

These external changes reflect internal re-orgnanisations. In 1837, rooms D1 and D2 on the ground floor of Old Court were appropriated to the Library (this space is now the Munro Room), and the eastern fireplace seems to have been blocked then. In 1840, further changes were made in the Library, and this appears to have involved internal reconstruction of the 1805 building. A new staircase was built, obstructing the ground floor windows west of the passage, and blocking former fireplaces on the west wall. The staircase provided a connection between the Library on the first floor and the new library space on the ground floor, with an entrance door into the passage between Old Court and Walnut-Tree Court. This is the arrangement which survives today. 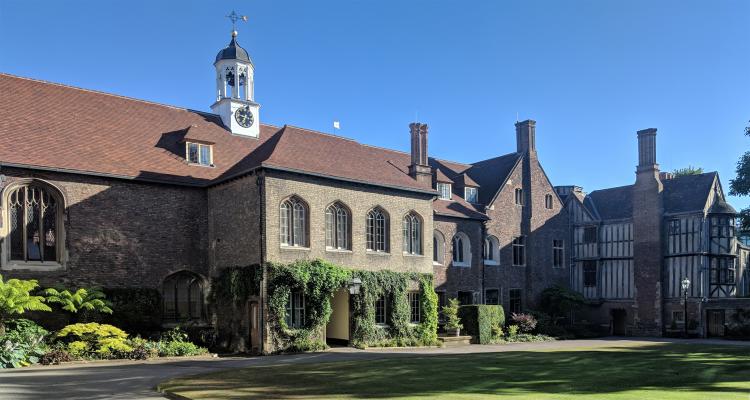 A similar view in modern times.

Buildings are shown all the way from the undergraduate library to the Essex Wing of the President’s Lodge.