This is a record of the inscriptions on the stained glass of the windows of the Old Hall, so that the coats of arms can be identified.

All the stained glass in the Old Hall was manufactured by Hardman & Co. of Birmingham: the oriel window in 1854, and the other windows in 1858/59. The south window on the west side seems to have been the last window to be installed. All the glass consists of coats of arms of people associated with the college, as detailed below. The inscriptions identifying each person are all in Latin, and in gothic script. In the oriel window, the inscriptions have faded, and might be very difficult to read: hence this list. 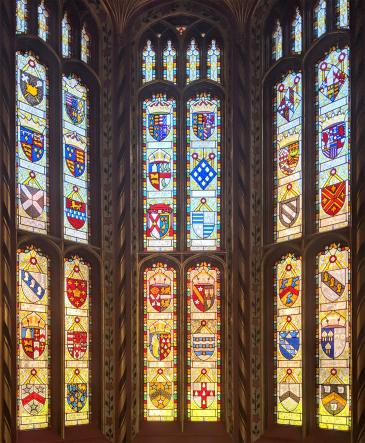 Top row: left, the Boar’s Head and the Arms of the College; centre, the two foundress Queens; right, the two principal benefactrices.
Row 2: Four early benefactors, and the fathers of Anne Neville and Elizabeth Woodville.
Rows 3-6: All the Presidents from Andrew Dokett to Isaac Milner, omitting the Presidents during the commonwealth period, between the two presidencies of Edward Martin. The arms shown for Robert Bekensaw are incorrect, and appear to be the arms of Grey/Booth, representing a benefactor of a much later period. The arms shown for Thomas Farman are also incorrect, and appear to be the arms of Robert Bekensaw. The correct arms for Thomas Farman do not appear anywhere. 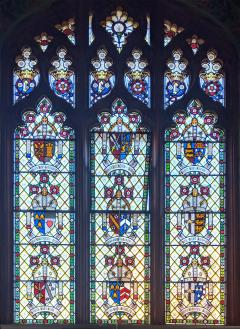 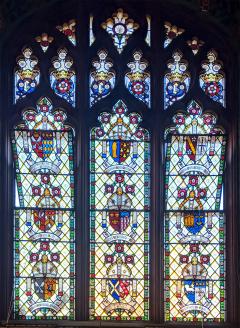 It is to be noted that if Hugh Oldham (Bishop of Exeter 1505) in this window had been swapped with John Towers (Bishop of Peterborough 1639) in the middle window above, then both windows would have been in perfect chronological order. 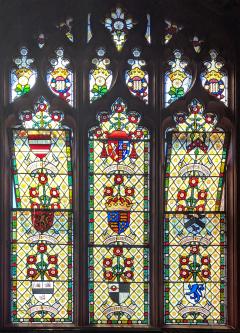 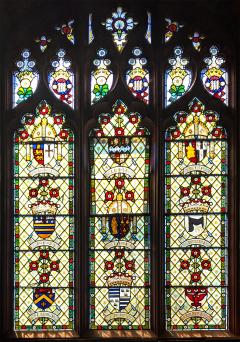 More benefactors. The final one (bottom right), Robert Moon, Fellow, was the benefactor who paid for the stained glass in the 1850s.