The Grove is the area north of the north wall of the former Fellows’ Garden, on the college site west of the river Cam. It is mostly undeveloped, and given over to trees and wilderness.

The current arrangement of the walks and tree planting areas seems to have been created around 1750–​2, shortly after the new mathematical bridge was erected. Before then, as can be seen in the Loggan plan of 1688, the grove seems to have been divided into two different areas: an inner grove (surrounding the north and east sides of the Fellows’ Garden), and an outer grove (extending to the edges of the island site). A bridge across the Cam connected the outer grove on the west side of the river with the bowling green on the east side. Then, as recorded in President Plumptre’s history:

The present bridge from the Cloisters to the Stable yard was built in the year 1749 and the Wall along the side of the River, as far as the College boundaries extend was carried on, and the Grove alter’d from its then nearly natural state to its present one (excepting some few additional improvements since made) in the 3 following years. This, and some considerable improvements in the Gardens of the College, and in Cloister Court, were principally contriv’d, and the work carried on under the direction of John Fortin [d. 1783] the then College Gardiner, a man of excellent skill in the ordinary parts of his business, and of some taste and knowledge in these superior parts; qualities which were useful and pleasing ...
[quoted AHUC, Vol. 2, pp. 55–​6] 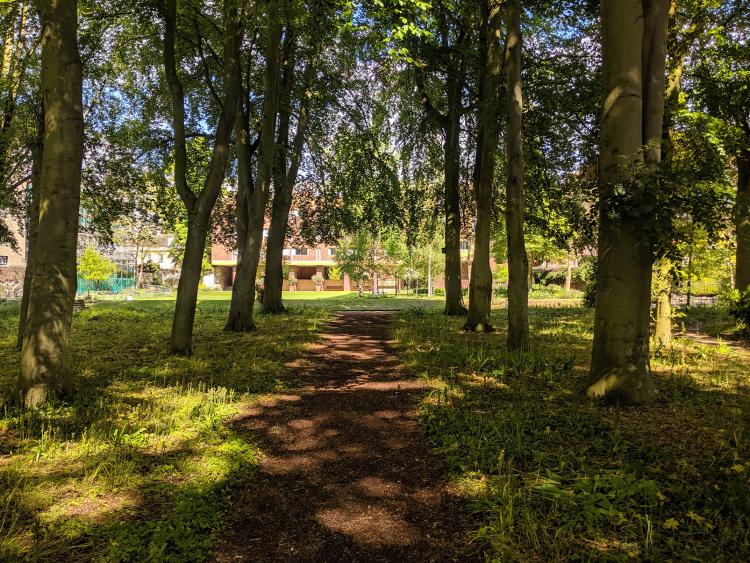 There is no record of the works carried out, but the implication of the changes observable in plans and maps, before and after, is that the two parts of the grove were made into one. A path along the west bank of the river was created to the northern tip of the Grove. A grand avenue of trees and a path was created in alignment with the southern boundary of the bowling green east of the Cam. The former bridge to the outer grove seems to have been removed and replaced with a bridge taking the avenue path directly over the river to connect with the existing path along the south side of the bowling green. This bridge was removed in 1793: its brick foundations used to be visible when the river was lowered, until 1980, when the west bank wall was reinforced below water level by steel piles and concrete. The new arrangement of paths can be seen in the 1825 Watford plan, and the bridge position can be seen in the 1763 Cantabrigia Depicta plan.

There is some uncertainty as to exactly when the bridge was moved from its old position shown in the Loggan plan of 1688 to its position alongside the south side of the bowling green. The print “The East Prospect of King’s College” by James Essex, dated 1741, shows the bridge already aligned with a path along the south side of the bowling green. If this was the case, then the presence of the bridge at that position would have provided even more reason for creating the avenue to meet that bridge. 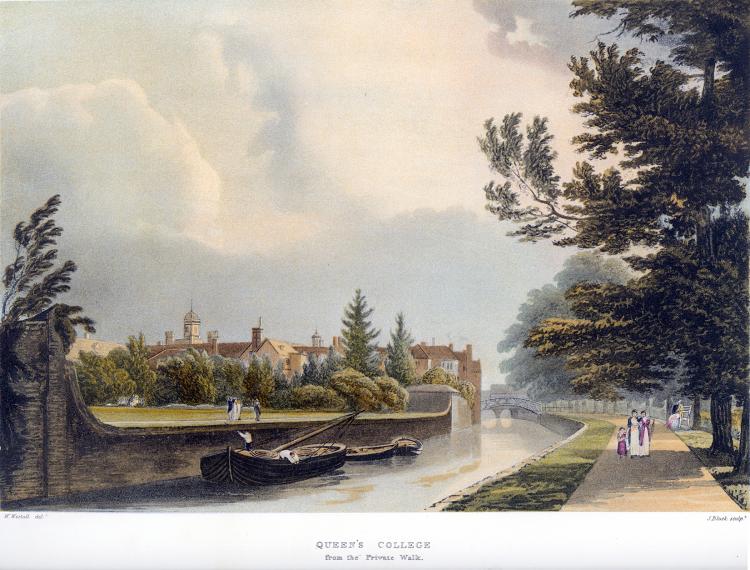 The walk alongside the river became popular with visitors, as seen in this print of 1815. The attraction of it was that, at the northern tip of the Grove, there was a breathtakingly beautiful view. The poet George Dyer wrote:

Let no one leave these grounds without going to the end of that walk by the side of the river, and let him thence look to the view on the opposite side; nor let him say, it is the best in Cambridge, or is well enough for Cambridge: though it has not hill and dale, perhaps, of the kind, it is one of the best any where; for it has grand objects, which amply compensate for the want of other beauties; a small home view, with the accompaniment of magnificent edifices, and agreeable scenery. The west front of King’s College Chapel, with its south perspective, the east and south perspective of Clare Hall, the elegant bridge over the Cam, Clare Hall piece, with its plantation of venerable old elms, King’s Meadow, with passengers passing and repassing on one side of the river, and Queen’s Close on the other, form a most delightful picture.
[History of the University and Colleges of Cambridge, by George Dyer, 1814, Vol. 2, pp. 162–​3]

Alas, this wonderful view was destroyed by the erection of the new King’s Bridge 1818–​21.

… the invasion of privacy and destruction of view, from the Queens’ side, caused by its erection was a very sore point with Dr. Milner, and nearly brought about a rupture between him and Simeon.
[Memoir of the Rev. Henry Venn, by William Knight, 1880, p. 12; 2nd ed. 1882 p. 20] 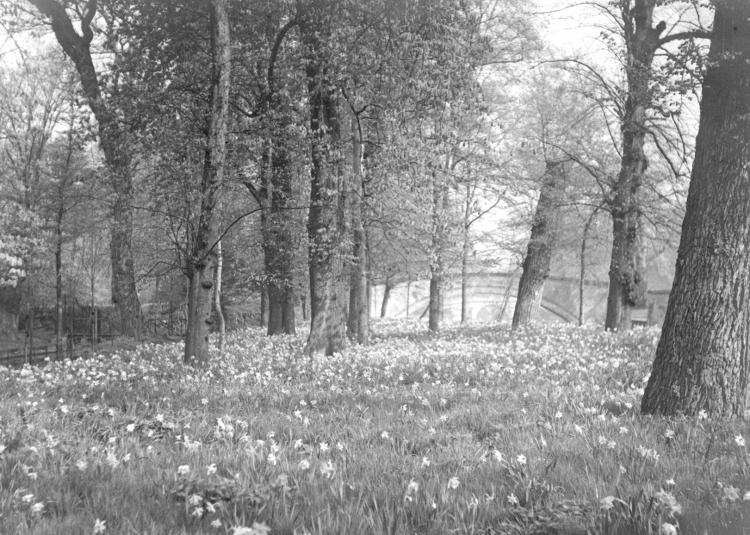 An undated photograph looking north from the Grove.

To the left can be seen Queens’ Ditch, and crossing the ditch can be seen the flat bridge to Erasmus’s Walk along the north edge of Queens’ Green. This provided a walking route from the Mathematical Bridge, alongside the river to the tip of the Grove, then left, across the bridge and along Erasmus’s Walk to reach the Backs. The bridge was removed in 1936 [Conclusion Book, 1936 Oct 7], and Erasmus’s Walk is now overgrown and lost. 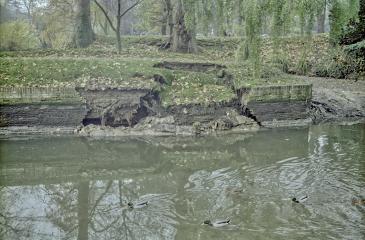 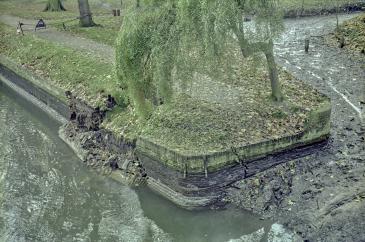 Two views of the river wall collapse at the north end of the Grove in 1980, after the river level had been lowered by opening the sluices at Jesus Lock.

The river had washed away the foundations of the wall, and it had toppled into the river, almost upside-down. In these views, it can be seen that, behind the exterior 9" brick wall, there was another older brick wall, which had been penetrated by tree roots, and had also failed.

A survey of the remainder of the wall southwards showed that it had all been undermined and was liable to similar collapse. The repairs included reinforcement underwater of the entire river wall north of the Mathematical Bridge, using concrete and sheet steel piling.