Originally they would have been on stone slabs on the floor of the Old Chapel. In 1643, many monuments in the chapel, perhaps including some of these, were damaged by the iconoclast William Dowsing and his men. During the chapel reconstruction works of 1773–​5, many monuments were displaced, and some moved into the ante-chapel. In 1925, the four remaining brasses were moved to the walls of the ante-chapel of the new Chapel, so that the old chapel could be refurbished as a lecture room: the old chapel is now the student library.

1. A monumental brass for an unknown priest in a cope, customarily dated to around 1480.

The stone slab has been disfigured by a modern water leak, but the brass itself is mostly undamaged.

……unforeseen
……be alert.   pray for me, please 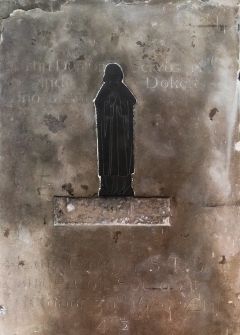 2. A small monumental brass of a figure with long hair, in a cassock and academic gown, customarily dated around 1535. The brass of the foot-plate has been lost, so we have no definitive evidence of identity for the effigy.

The stone slab has an inscription, which might or might not refer to the figure in the brass. It reads:

Below the brass is an inscription on the slab unrelated to the brass:

3. A monumental brass for John Stokes, President of Queens’, who died in 1568.

The brass of the effigy itself has been lost. The foot-plate, in black-letter script, reads:

Your body is buried under this sad tomb, venerable man,
and it is due to be happy food for hungry worms.
But your soul Christ took up to heaven, and
we have faith that it takes its place on the right hand of the father.
For your deeds were proof of living faith,
and are hereafter to be celebrated every day.
Pour forth prayers, so that Christ may always and for ever
provoke others to follow this man’s outstanding deeds.

John Stokes, Professor of Sacred Theology and Master of this College,
died on 29 April in the year of the Lord 1568, who founded four studentships in this College and
left sixpence every week from his tenements and lands in Oakley,
which he gave to the College near his death to the value of £9 l3s 4d and bestowed many outstanding acts of kindness upon the College.

4. A monumental brass for Robert Whalley, a Fellow of Queens’, who died in 1591. Unusually, for a monument to an academic in a college chapel, the effigy is shown in secular dress of the high fashion of the period. The inscribed foot-plate reads:

Whalley lies here (that faithful fellow);
here pleasantly lie Robert’s ashes, here too his bones.
God in his providence placed him in the celestial garden
during spring, for no later winter ever blasted the old man.
It was his custom when alive to sport with the golden-haired Muses;
and now he competes for honour with the choir of angels.
Blessed plant: the earth takes pride in your root.
But you yourself surge with lofty foliage into the heights.
Sleep sweetly for ever, constant and loveable soul,
a tomb of the Muses and the Graces in this tomb.

✠ Robert Whalley,
gent., of Nottingham, formerly a Fellow of this College,
died in his 28th year
on 18 August in the the year of the Lord 1591.

Translations above in italics provided by Dr David Butterfield.