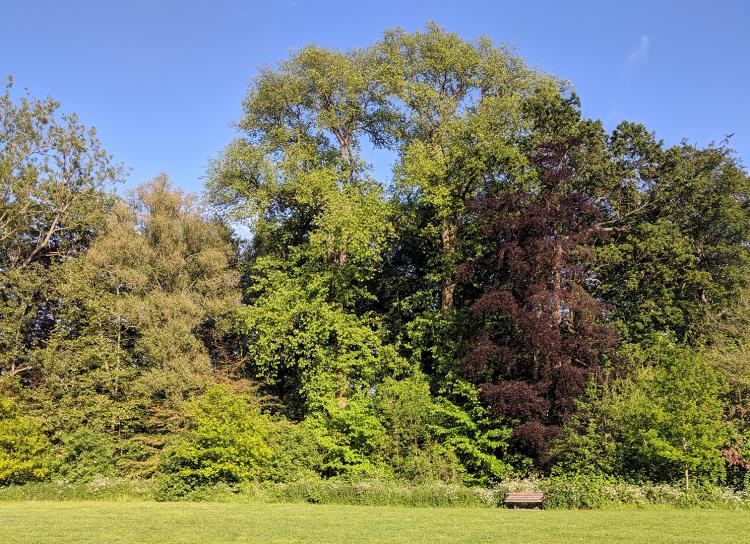 In the Grove of Queens’ College are two remarkable elm trees.

They are best viewed from Queens’ Green, where they are in alignment with West Road projected. They are the two tallest trees in Queens’.

These two trees are remarkable for having survived the outbreak of Dutch Elm Disease in the 1970s, which wiped out millions of British elms. To be clear, these trees are infected with the fungal disease from the outbreak, but it has not killed them. Other elms in the Grove at that time did die [Queens’ College Record 1981, p. 5].

Quoted figures for the height of the larger of these two trees vary widely: figures of 44 metres (144 feet) [Wikipedia] have been seen, but a more recent estimate is 34·5 metres (113 feet) measured in 2014 [Monumental trees].

For many years, the exact cultivar of these trees was misidentified: they were incorrectly said to be Huntingdon Elms, Ulmus × hollandica ‘Vegeta’. In 2013, DNA testing of the trees revealed that they are both genetically identical to other known Chichester Elms, Ulmus × hollandica ‘Cicestria’, at Bedford and Norwich. It probably does not help that the two cultivars were confused and/or conflated in certain 19th century catalogues.

In 2009, micro-propagation was used to clone these trees, and in 2017 the young saplings were distributed to King’s College, Trinity College, Newnham College, the University Botanic Garden, the Department of Earth Sciences, and various other private recipients.