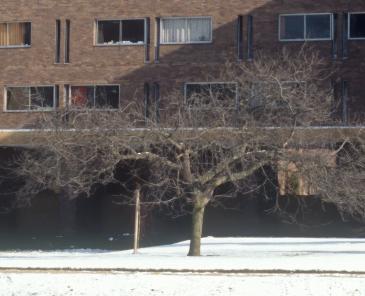 In 1948, Queens’ College was presented with a special apple tree, as recorded in The Dial:

W. S. Rogers (Matric. 1922) has presented to the College an apple tree descended by grafting from the tree under which Newton is reputed to have made his discovery.
[The Dial, No. 98, 1949 Lent, p. 8]

It is not recorded as such, but the gift was probably prompted by the College’s quincentenary celebrations in 1948. Dr Rogers had previously presented a walnut tree sapling to replace the old Walnut Tree that was felled in 1932. He worked in the Pomology section at the East Malling Research Station, which, amongst other things, conducted significant research into apple rootstocks and grafting. The East Malling Research Station is the source of most of the apple trees worldwide that claim to be descendants of Newton’s original apple tree at Woolsthorpe Manor. There are other scions of the East Malling Newton apple tree at the University of Cambridge Botanic Garden, and outside Trinity College.

The Queens’ apple tree was planted next to the bowling green, close to the river. The photograph here shows it in February 1986.

Over the years, local knowledge of the special history of this tree was apparently lost, and the demise of the tree was simply reported:

The old apple tree has been replaced by a group of birch trees …
[Queens’ College Record 1993, p. 7]

He matriculated at Queens’ College Cambridge in 1922 to read for the Ordinary B.A. degree in Agriculture, gaining a First Class in his final examination. He graduated B.A. in 1925. He stayed on as a postgraduate to read the one-year Diploma in Horticultural Science (Pomology) which he passed in 1926. He became M.A. in 1929.

In 1927 he joined the staff of East Malling Research Station, working in the Pomology Section. Some of his early work involved the creation of underground laboratories lined with glass panels, so as to observe actively growing root structures in the soil.

In 1939 January he graduated Ph.D. from the University of London, his thesis being titled “Studies on the root systems of some hardy fruit plants” [OCLC 1006226553].

In 1946 February, he was awarded the Jones Bateman Cup by the Council of the Royal Horticultural Society, for research in strawberry culture and orchard cover-cropping.

On 1948 January 28, he was awarded the degree of D.Sc. by the University of London, based on his published works.

From 1949 until his retirement in 1969, he was Head of the Pomology Section at East Malling Research Station.

On 1969 January 29, he was awarded the Ridley Medal by The Worshipful Company of Fruiterers, jointly with Francis Ralph Tubbs, the Director of E.M.R.S.

A Brief History of Isaac Newton's Apple Tree, at University of York.