To clear the site for the erection of Fisher Building, the college demolished every building west of the river, except the building destined to be converted into the old Fitzpatrick Memorial Hall. Demolitions commenced in May 1935. 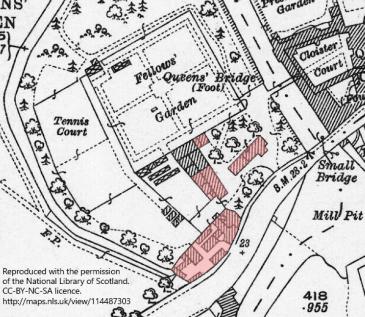 The buildings demolished were those coloured pink on the plan shown.

“This Building [Fisher] stands on a site where formerly stood:

Demolition of the buildings referred to above commenced on 17th May 1935.” 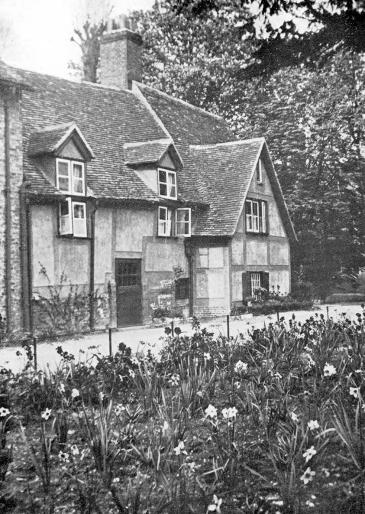 The two staff cottages itemised No. 1 in the list above, before demolition in May 1935. These stood roughly in the middle of what is now known as The Round, on the opposite bank to Essex Building. This view is taken from the south-west: the riverside buildings of the college are obscured by the trees to the right. The history of these cottages is not known, but there are signs of buildings on this site in early maps and plans back to Hamond’s plan of 1592, at least.

Up until 1841, a ditch parallel to Small Bridges Street, connecting the River Cam with the ditch running around the west of the site, ran in front of these cottages, roughly where the photographer is standing. The ditch had been created in 1475 to mark the southern boundary of the college land west of the river then acquired.

The Head Porter’s House, item No. 2 in the list above, with the staff cottages beyond, before demolition in May 1935.

This house was relatively modern, built to replace a former building marked as a Brewhouse in the 1825 plan. 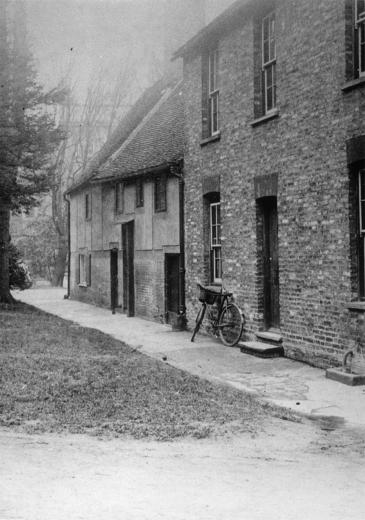 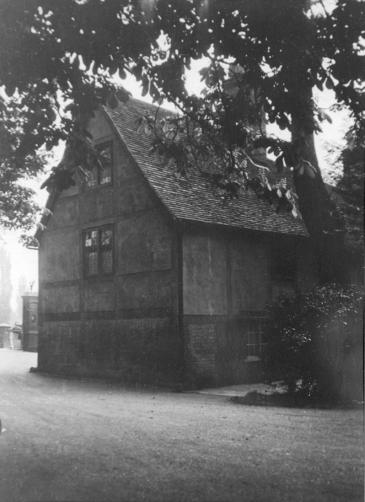 Left: A rear view of the staff cottages and Head Porter’s House, before demolition in May 1935, taken from the north-west. The riverside building and Essex Building can just be discerned in the mist behind the trees. 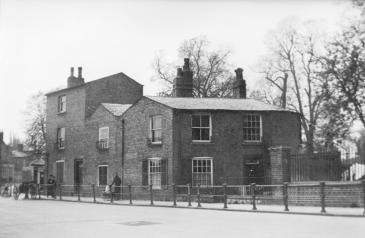 The two houses known as Nos. 1 and 2 Newnham, items No. 3 and No. 4 in the list above. They were located fronting onto the street, adjacent to the elevation marker 23 + on the map shown above. These properties, along with Coulson’s Yard, were built on land originally south of the ditch defining the southern boundary of the college. That land, between the ditch and the causeway road, had been leased by the borough council to a Mr Robert Brown (a coal merchant with a wharf on the mill pool) in 1813, and at some time the college succeeded to that grant. It is not known when these houses were built. Queens’ leased these houses on the open market to private tenants: unlike the properties above, they were not reserved for college staff. Owing to an exchange of land between the college and the borough in 1935 in order to widen and straighten the road now known as Silver Street, the location of these houses would now project out into the present roadway.

According to the circumstances of the tenants, from time to time these two houses provided licensed lodgings for Queens’ students, with the tenant acting as landlady.

The street-name “Newnham” and the house numbers 1 and 2 are explained as follows:

In our own times there has been some controversy over the name of the causeway. Attempts have been made more than once by the authorities of the borough with little regard for history to extend Silver Street across the river as far as the corner where the Newnham Road now officially begins. However in 1915 the inhabitants of the causeway succeeded in persuading the borough council to confine Silver Street to its historical limits; and the area of the old Small Bridges together with the causeway beyond as far as the Hermitage corner is now known simply as Newnham. The fifth house in Newnham Terrace is No. 9, bearing witness to an intention at the time when it was so named to start Newnham Road from the bridge. This change would probably have been convenient to postmen and others who are confused by a 1 and 2 Newnham and a 1 and 2 Newnham Terrace. … But though the Cambridge councillors might have devised something better than the simple Newnham for the name of the Small Bridges and Causeway, the historian must pronounce that they did well in holding back Silver Street to the east side of the Cam.
[A Little History of S. Botolph’s, Cambridge, by Arthur Worthington Goodman, 1922, p. 61]

Presumably the battle was later fought again, and decided in favour of extending the name Silver Street west of the river. 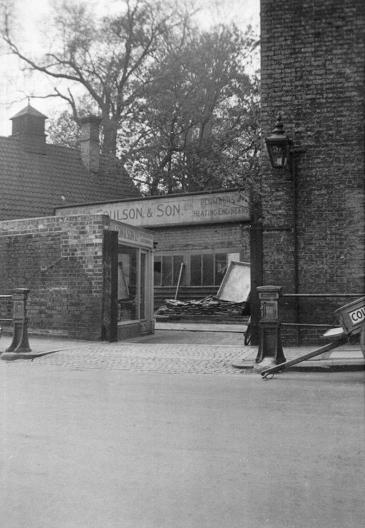 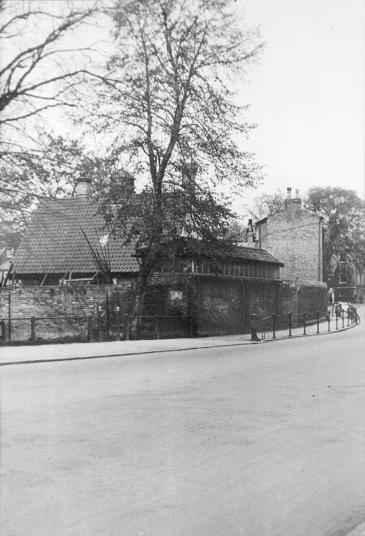 Left: the entrance to Coulson’s Yard, item No. 5 in the list above, adjacent to No. 2 Newnham.

Right: a view of Coulson’s Yard from the west. The Essex Building can be seen on the far right, behind the tree. On the left is the start of the footpath across Queens’ Green.

Both views were taken before demolition in May 1935. Coulson’s Yard had been previously known as Flack’s Yard: George Flack & Sons, plumbers and glaziers, had been earlier tenants. Coulson & Son took over the site in 1927.

Coulson & Son was the building contractor appointed for the erection of Fisher Building, so one of their earliest responsibilities was demolishing their own yard. 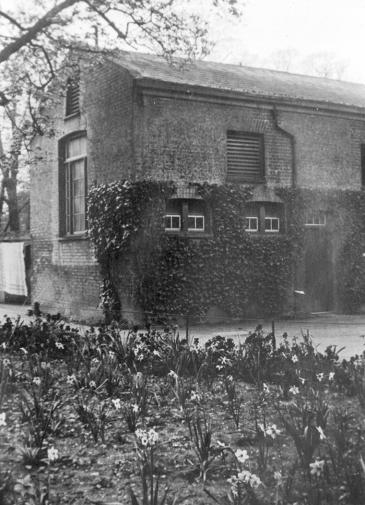 The south end of the toilet block and cycle shed, No. 6 in the list above, before demolition in May 1935. The north end of this block abutted the building that was not demolished and was later rebuilt as the Fitzpatrick Memorial Hall.

This photograph and all those above on this page were originally taken by C. J. A. Dungate, Chief Clerk of Queens’ College. 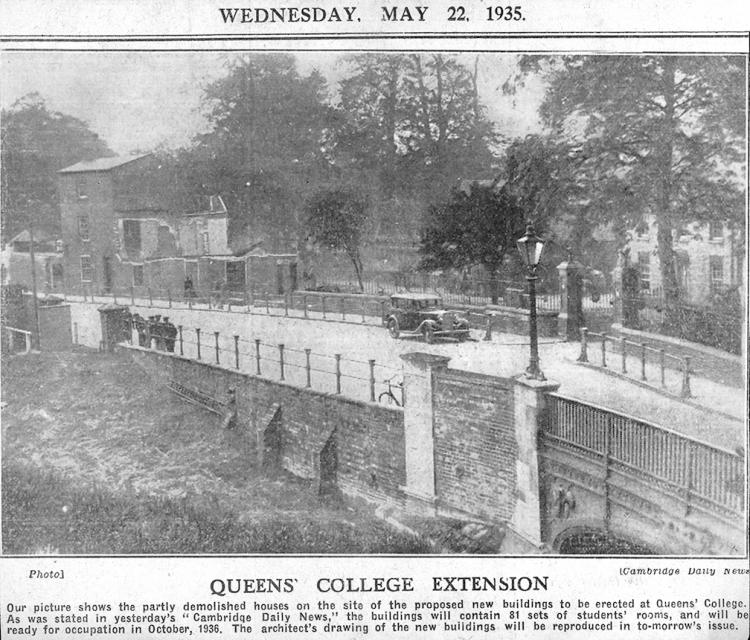 A newspaper report of the demolitions in progress.

On the left, the house "No. 1 Newnham" has been mostly demolished, while No. 2 is still standing.

On the right, the 1932 gates can be seen with the Head Porter’s house behind.