Cripps Court: Before and After 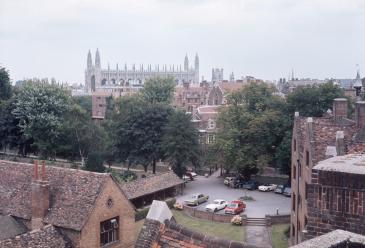 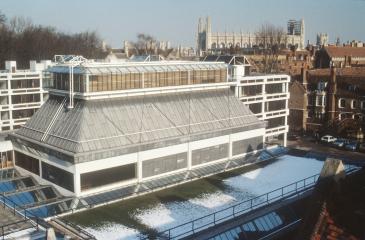 Left: a view of The Round, and towards King’s College Chapel, around 1970. The long low building was a bicycle shed, behind which was part of the Fellows’ Garden. In the left-hand bottom corner is part of the old Fitzpatrick Hall, from 1936, which served as a JCR Building.

Right: a similar view taken in February 1986, showing Cripps Court and the Dining Hall on the same site. 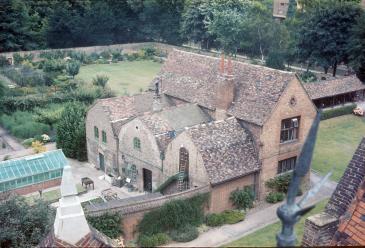 A rear view of the old Fitzpatrick Hall around 1970. It had been converted from an older building in 1936, to become a JCR (replacing the Erasmus Room). The three small rooms at the rear of the main Fitzpatrick Hall were (from left to right), the North Room, the Middle Room (both created in 1959), and the Quiet Room (with fire escape), all used for student activities. Below those three rooms was gardeners’ accommodation, near the greenhouses. The upper floor of the Fitzpatrick Hall itself was the JCR room, where newspapers and TV were provided. The lower floor served as a table-tennis room, and, in 1969, the first college bar. Performances by the Bats took place in the upper hall.

Behind these buildings can be seen part of the walled Fellows’ Garden. Just visible above the roof of the cycle shed, in the east wall of the garden, is the top of the locked entrance used by the Fellows. This gateway was sealed by a wrought-iron gate which, after demolition of the garden, was moved to become the security gate to the Old Library. 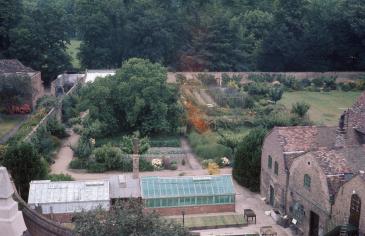 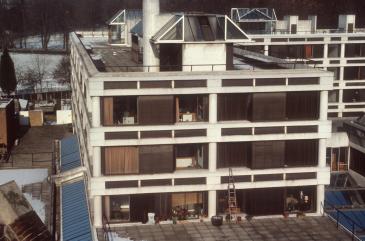 Left: the walled Fellows’ Garden, and gardeners’ accommodation, seen from Fisher Building around 1970. In the far north wall can just be seen the gate with stone frame which still survives today. At the extreme left is the 1936 squash court building, and the Fives Court, next to a glass house at the north-west corner of the garden.

Right: the same view in February 1986, with the FF end of Cripps Court facing the viewer. The original flat roof design of Cripps Court can be seen, which was demolished in 2006 to be replaced by a new 4th floor. The 1936 squash court building can just be seen. 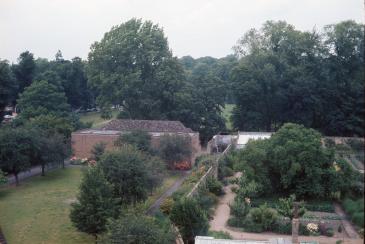 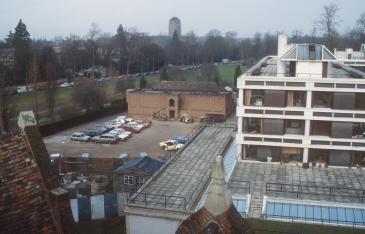 Left: Squash Court building, and Fives Court, around 1970. By this time, the Fives Court had fallen out of use, and was an outdoor store.

Right: the same view in February 1986, showing the 1936 Squash Court building within a few months of being demolished to make way for the foundations of Cripps Court Phase 3 (Lyon Court). 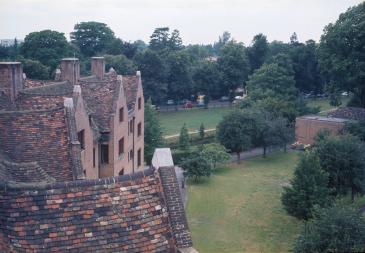 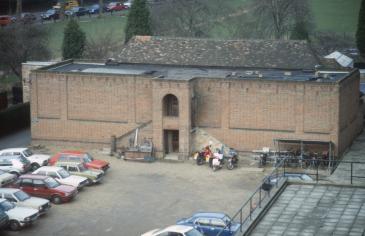 Left: a view, around 1970, from Fisher Building across the lawns, then across Queens’ Green to Queen’s Road.

Right: a closer look at the 1936 Squash Court building, a few months before it was demolished in 1986. The courts themselves had a flat, glazed roof (which leaked). The hipped roof behind covered a building which had lock-up garages on the ground floor, and a large loft above used as storage for student trunks, and furniture. The west-most garage was used by the Bats as a scenery and equipment store. Behind can just be seen signs of a newer brick building: this was gardeners’ accommodation built to replace the accomodation lost when the old Fitzpatrick Hall had been demolished in 1971. This was replaced by the current Gardeners’ Building further north, in the Grove, before being demolished along with the Squash Courts to make way for Lyon Court.