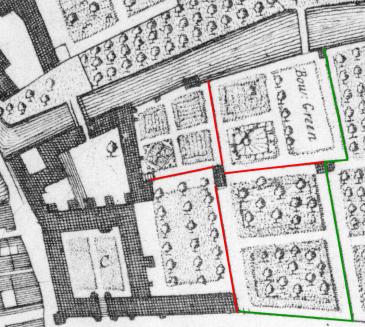 Shortly after Queens’ College acquired part of the site of the former Carmelite monastery 1537–​44, walls were erected to sub-divide the newly acquired land into four parts.

The new walls are shown red in the site plan shown here (a detail taken from Loggan’s plan of 1688, west upward). The college accounts record that a wall of clunch and brick was erected around what is now called the President’s Garden in 1545. The other walls must have been erected either at the same time or shortly afterwards, as they are all present in Hamond’s view of 1592. It is not known how quickly each of the other three plots of land acquired specific usages or functions, but probably these had been established by the time of Hammond’s view. By reference to the site plan shown here: 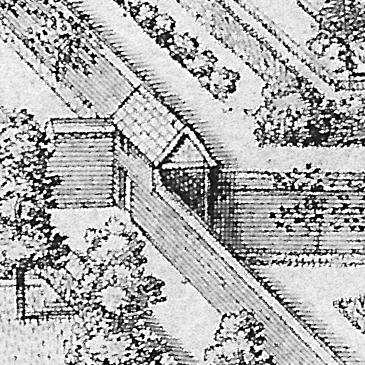 There were no gateways or doors in these walls, except at the central point where all four walls came together. At this location there was originally a small building, or hut, with doors leading to each of the four plots of land. This view of the hut is a detail taken from Loggan’s view of 1685: it can be also seen in Hamond’s view of 1592. The building appears to be higher than the surrounding walls, possibly having a shallow upper storey with windows, and a pitched roof. 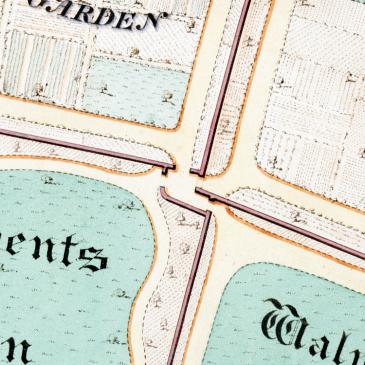 Around 1780, during the presidency of Isaac Milner, the main President’s Garden was enlarged eastwards at the expense of Walnut-Tree Court. In order to preserve the Fellows’ access to their garden and bowling green via the former hut, an awkward dog-leg had to be constructed south of the original hut to provide a corridor between the now-smaller Walnut-Tree Court and its original doorway. This is shown here in a plan of 1825.

The appearance of the plan suggests that, by this period, the hut had lost its upper storey and roof.

Of the four walls shown in the 1688 site plan above and the 1825 plan here, only one survives today at its original location: the wall between the President’s Garden and the Fellows’ Garden, down to the river. We have already seen that the 1545 wall between the President's Garden and Walnut-Tree Court was moved eastward around 1780. The wall between Walnut-Tree Court and the orchard to the north was removed in the 19th century, presumably around the time that Friars’ Building was erected in 1886. The wall from the hut to the boundary with King’s College was partly removed by design when Erasmus Building was erected 1958-9, and the remainder of it collapsed, unplanned: it was replaced by a modern low brick wall. 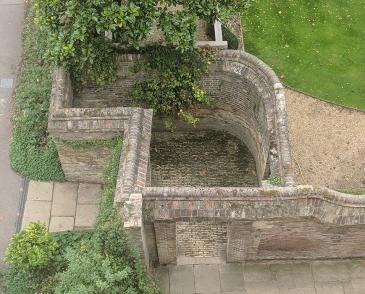 Today, just the walls of the former hut survive, with their gateways. The doorway from Walnut-Tree Court to the dog-leg is disused and stopped up.

In this view (south upward), three of the original gateways can just be seen: the gate to the Fellows’ Garden in the middle foreground, the gateway to the former orchard (now Friars’ Court) to the left, and the gateway to the President’s Garden on the right.