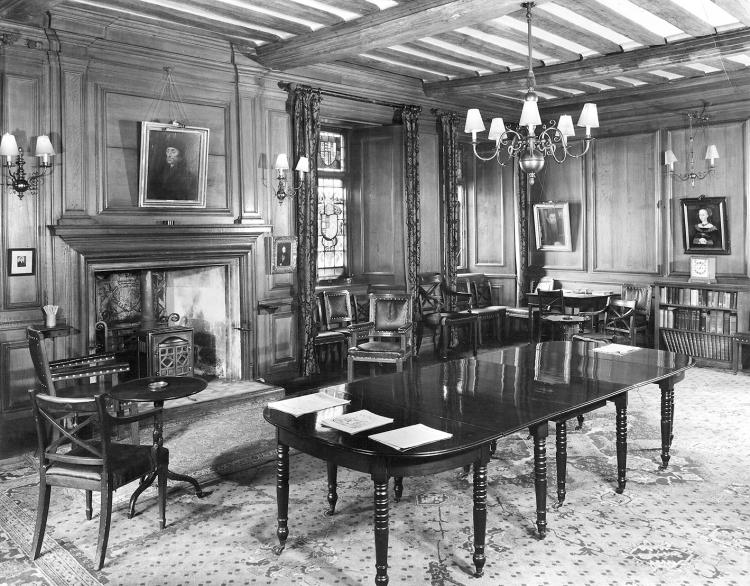 The first two photographs on this page date from around 1948, before the door to the Munro Room was made in the far corner, ca 1964. 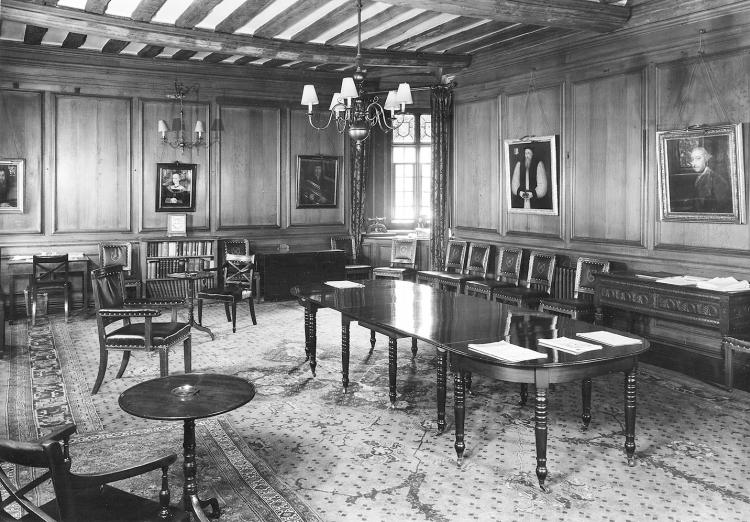 It is probable that the room was originally smaller, with the eastern wall being under the far beam, with a narrow passage beyond. At some time, the wall under the beam was removed to enlarge the room, and the beam, bearing the load of a wall above and in the attics above that, began to sag under the strain. It is now supported from above by steel rods from a steel joist in the West Room of the Old Library.

Behind the panelling of the right-hand return of the south-east window bay is an ancient disused doorway to the Old Hall, now covered by panelling on both sides. It was rediscovered in 2003 during floor re-laying in the Old Hall. The existence of this doorway, which is not properly blocked with brick or stone, explains the lack of sound isolation between the Old Combination Room and the Old Hall.

The panelling was put up in 1686, by Austin, a local joiner, costing £64 then. The cost was met by a benefaction of £100 from Anthony Sparrow, who had been President 1662–67, the residue paying for furniture and fittings. At about the same time, or perhaps a little earlier, the windows, originally of gothic pointed style, were made rectangular with cross mullions.

A portrait is visible mid-right in the first photograph, and at the extreme left margin of the second photograph: this portrait is of Humphrey Tyndall (or Tindall), President 1579–1614. This portrait was lost when the car in which it was being transported back from restoration was stolen. 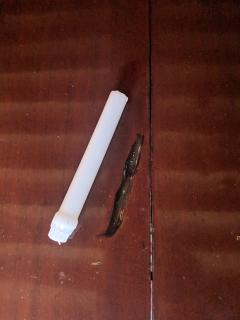 The table was purchased around 1818 from Elliot Smith. At one end is a long scorch mark: the story of that burn is recounted as follows:

One more rector shall be mentioned to give encouragement to those gloomy people who lament the decadence of the present age, George Hewitt, 1799–1834 [Fellow 1783–1835]. Gunning says that Isaac Milner brought him into Cambridge from the country in order to keep his eye upon him, and no doubt Milner resigned the rectory [of St Botolph’s] so as to make room for Hewitt. … The last story is told to this day by a deep black furrow, about as long as a man’s middle finger, in the polished mahogany of the beautiful table of the combination room at Queens’. Hewitt had been dining alone one night and after dinner he upset a candle. Being after dinner [presumably with the implication that the servants had withdrawn] he allowed the candle to remain as it was until it had permanently recorded in the table the type of man who at the beginning of the last century was only too frequently tolerated by those in authority to a disastrous lowering of the tone of the university and to a long-lasting injury of the English Church.
[A Little History of S. Botolph’s, Cambridge, by A.W. Goodman, 1922, p.112]

The chairs are similar to the Old Hall chairs of 1865, except that the rear legs are curved, and the front legs have castors. 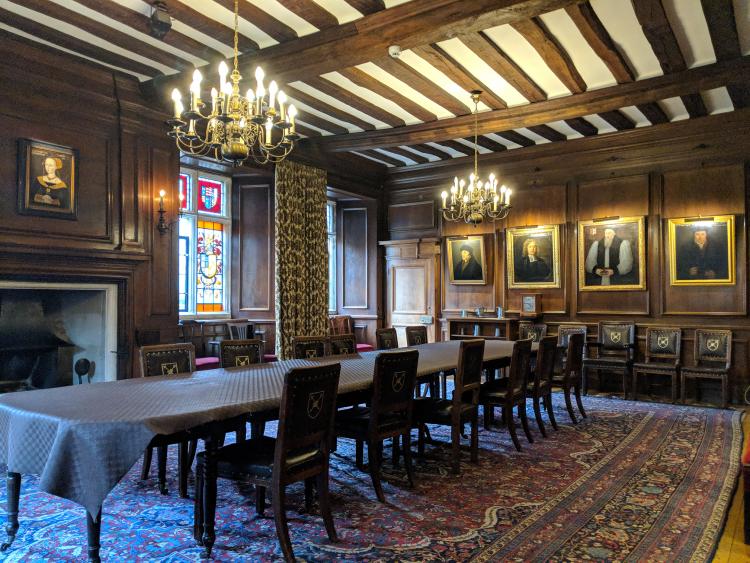 A more recent view of the Old Combination Room, showing the new door, in the far corner, created ca. 1963/4 connecting to the newly-converted Munro Room.

This stained glass, in the middle north window, shows the arms of the college impaling the arms of Isaac Milner, President.

The five panes of stained glass vertically do not exactly fit the window frame: there are coloured fillers above and below. One may speculate whether this glass was not originally in this location. Possibly it was part of the Old Hall stained glass of 1819–​22, towards which Milner had contributed 50 guineas in 1819. All the 1819–​22 Old Hall glass was moved elsewhere or destroyed when the Hardman glass was erected 1854–​8.

Stained glass in the west window depicts the arms of the two foundress queens. Left: Margaret of Anjou: 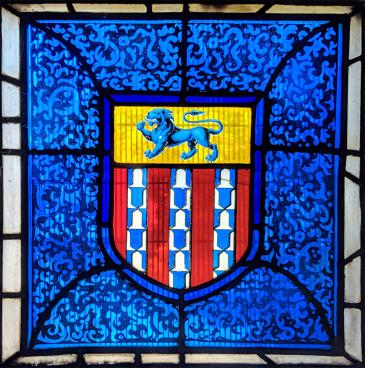 The other half of this window is of clear glass, where one might have expected another coat of arms. Two authorities report that the arms of Thomas Harrison were to be found in this room, but no such arms can be seen now. So maybe this clear window was where the Harrison arms once were.
[Memorials of Cambridge, by C.H. Cooper, 1860, Vol. 1, p. 323; RCHM, 1959, Part II, p. 171].

The arms in the middle north window depict: on the left, Queens’ College; and on the right, King Henry VI and Margaret of Anjou.

The latter, although set in an early 19th century surround, appears to be medieval, and might be the oldest stained glass in college. In Margaret’s fifth quarter the barbels appear to grasp in their mouths the stems of the crosses crosslet above, which are tilted to meet the mouths below. This detail is characteristic of the way in which her father René of Anjou represented his arms.[MS Egerton 1070 Pt 2 f. 4v]. This glass is a rare example of Margaret’s arms that preserves this detail, which encourages the notion that this glass might be contemporary with her reign.

The stained glass in the eastern north window depicts the arms of, on the left: George Harry Grey, 5th Earl of Stamford, admitted Fellow-Commoner 1755, matriculated 1755, M.A. 1758. Benefactor (with his two brothers) 1764. Succeeded his father as earl 1768. Died 1819. He was a descendant of Elizabeth Woodville by her first marriage to John Grey of Groby.

The complete identification of the arms on the right is still a topic of research. The dexter pale (left half) is that of Wray, while the sinister pale (right half) is not recognisable in the form shown, with bunches of grapes. A similar coat of arms can be found, but in the form of four quarters, on a silver sauce boat hallmarked 1760, and inscribed DW. But in that version (a) the fruits are pine cones (called pineapples in heraldry) above a branch, rather than grapes below a branch; and (b) the background is hatched red: this is recognisable as the arms of the Pyne family. The 1760 silver is probably the gift of a Daniel Wray, who was admitted as a Fellow-Commoner in 1763. That 1763 Daniel Wray has sometimes been incorrectly assumed [Venn Alumni] to be a son of the better-known Daniel Wray, admitted in 1719, but the 1719 Daniel Wray is not recorded as having had children, and did not marry until 1758. So, someone seeing the 4-quarter arms on the 1760 silver, and believing the donor to be a son of the 1719 Daniel Wray, might mistakenly infer that the arms of the 1719 Daniel Wray would be the same, but in the form of two pales. Couple that with an artistic error which transformed pine-cones into bunches of grapes, one obtains what might have been intended to represent the arms of the elder Daniel Wray (1701–83). But no record has been found of the elder Daniel Wray bearing arms. It is not clear why the college would want to display the arms of Daniel Wray: he is not recorded as a benefactor. One publication identifies these arms as being those of Thomas Harrison (see above) [RCHM, 1959, Part II, p. 171]. 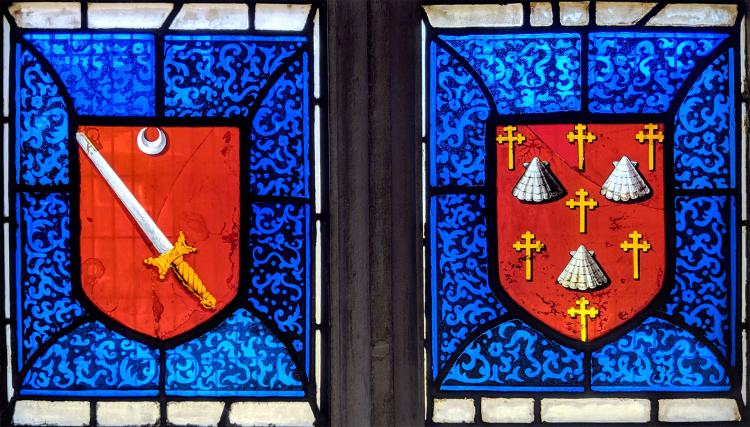 The stained glass in the south-east window depicts the arms of, on the left: Joseph Jee, Fellow 1814 until his death in 1829. He held the office of Senior Bursar from January 1819 to January 1825 when this stained glass was erected, around 1821.