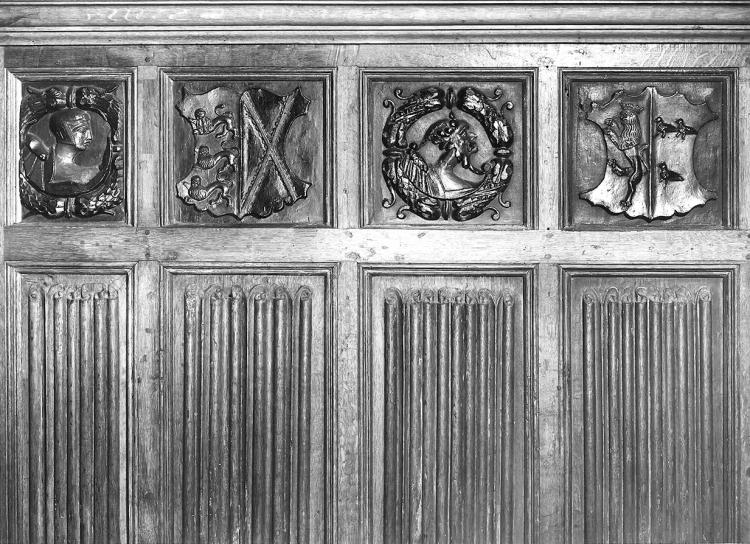 Linenfold panelling, with a frieze of carved wood heraldic arms alternating with grotesque heads, was erected in the Old Hall from September 1531 to September 1532.

Most of the frieze panels are 11″ by 11″. The majority of the heraldic arms commemorate early benefactors to the college, although some have been difficult to identify. 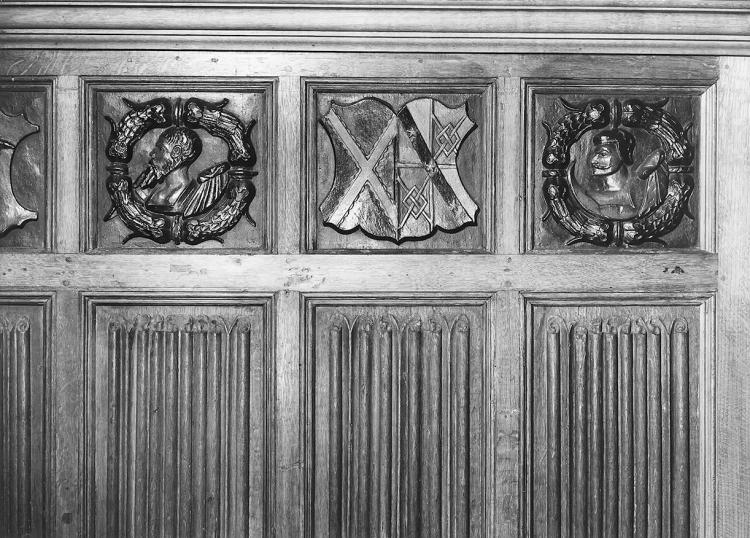 The heads and arms were carved by Giles Fambeler and Dyrik Harrison. A painter, John Ward, was employed on the skochyns. [escutcheons]

The works were recorded in unusual detail in the Magnum Journale, the account book of the college. 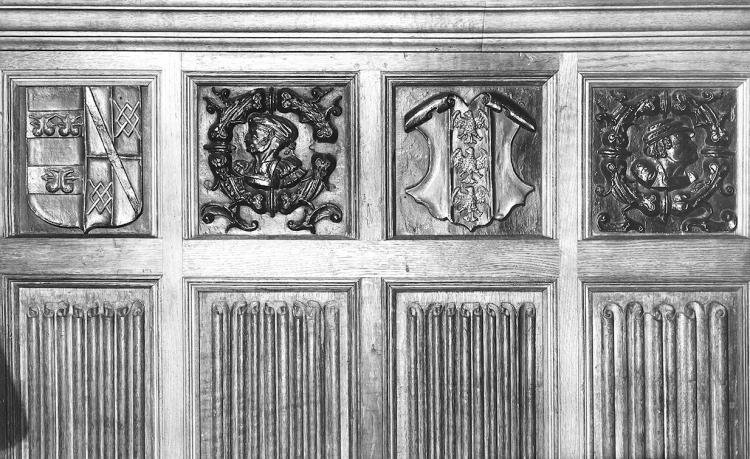 In 1732–4 the Hall was refitted in italianate style. The linenfold panelling of 1531–2 was taken down and re-erected in the President’s Lodge, in the room in the riverside range, south of the Audit Dining Room, formerly known as the Servants’ Hall, now known as the Breakfast Room, and in the adjacent passage to the Audit Dining Room. The new locations were smaller than the Hall, so presumably some of the panelling and frieze was lost at this stage.

While in this room, the panelling and its heraldic arms were documented in 1777 by the antiquary William Cole.

The arms were documented again by Willis & Clark in 1886, but by that time some of the arms described by Cole in 1777 could no longer be found. Willis & Clark did not know that this room had been made smaller on the south side at some date by the insertion of a staircase to the attics: resulting in the loss of an unknown number of panels, and three items of frieze becoming hidden above a false ceiling in the lobby to the Cloister staircase, where they were rediscovered in 1983–4, when the door to Cloister staircase was un-blocked. [Queens’ College Record 1984, p. 9] 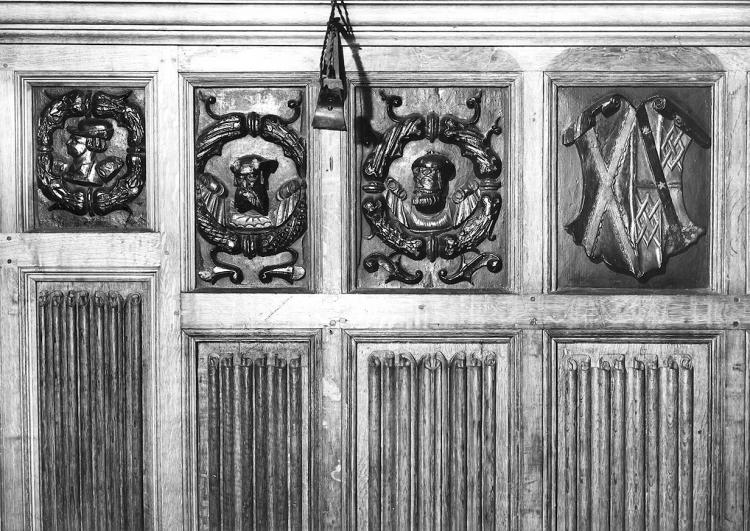 In 1896–7, the panelling was taken down again and re-erected in the President’s Study, above the Old Combination Room. The linenfold panels were supplemented by some modern reproductions, and new doors for the room were panelled to match the wall panelling.

As can be seen in this photograph, some of the frieze panels were larger (height 15″ in compartments RCHM 20–30), and they include the only example of the royal arms (not shown), so it is conjectured that these panels might have originally been behind High Table at the north end of the Hall. 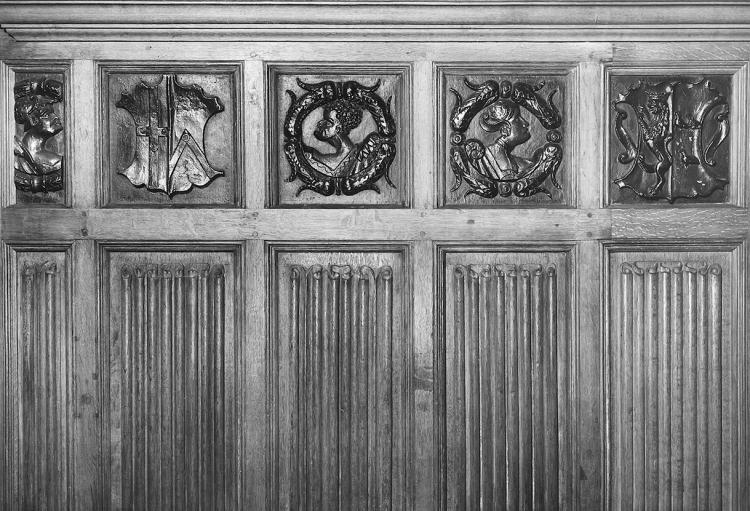 The reference numbers given for the heraldic arms in previous publications can be correlated as follows, starting at the north-east corner and working clockwise around the room:

Cole 1777: the number shown in this column is the number assigned to each of Cole’s 13 heraldic descriptions on page 67 of Volume 2 of The Architectural History of the University of Cambridge, by Willis & Clark. Cole was not precise in enumerating numbers of repeats, so we cannot infer how many carved arms he saw in total.

W&C 1886: the numbers shown in this column were the compartment numbers at which each of Cole’s descriptions appeared when seen in the 1886 survey of the Servants’ Hall, counting from the south-east corner clockwise, as reported on page 67 of Volume 2 of The Architectural History of the University of Cambridge, by Willis & Clark. They reported that there were 51 compartments in the room, and 6 in the passage outside, making 57 in all, each having either a head or heraldic arms in the frieze. They reported only 21 instances of arms, and 36 heads. Where frieze compartments in the same length of frame have compartment numbers at the same separation in the 1886 and 1959 surveys, the 1886 number is shown in bold, on the assumption that each section of framework retained its own frieze panels undisturbed.

RCHM 1959: the numbers shown in this column are the compartment numbers in which the heraldic arms appear, counting from the north-east corner clockwise, when seen in the 1959 survey of the President's Study, on pp. 171–2 of Part 2 of An Inventory of the Historical Monuments in the City of Cambridge, by the Royal Commission on Historical Monuments (England). There are 62 compartments overall, of which 24 are heraldic arms, and 38 heads.

Broomfield 2016: the letter assigned to each carved arms in The Heraldry of Queens’ College, Cambridge, by David Broomfield.

Cole’s arms designs numbered 7, 10, 12 did not survive to the 1886 survey. The 1886 survey failed to note Cole’s arms design 4, and counted one too few copies of designs 1 and 5 compared with today: those three uncounted designs can now be seen at compartments RCHM 11, 12, 13, filling a single timber frame. All arms carvings seen in the 1886 survey at the old location, plus those three, have survived to the present day in the President’s Study. We have to assume (a) that some of the compartments seen and described by Cole in 1777 were elsewhere in college in 1886, and therefore not seen in the 1886 survey, but were restored to view in 1896–7 in the President’s Study; and (b) that some others of the compartments seen and described by Cole in 1777 were lost for ever before 1886. We know that three of the compartments missing in the 1886 and 1959 surveys were hidden above a false ceiling in a lobby, but that does not account for any of the missing designs.

1531–2: Magnum Journale, quoted in pp. 61–​6 of Volume 2 of The Architectural History of the University of Cambridge, by Willis & Clark.