Queens’ Ditch is the remnant of a branch of the River Cam which took water from Newnham Mill and returned it to the main river at the northern tip of the Grove.

As the River Cam (or Granta) passes the Paradise Nature Reserve (near Owlstone Croft), it splits into two. Both branches become mill-leats, artificially raised above the surrounding natural ground level of Lammas Land, Sheep’s Green and Coe Fen.

The eastern branch becomes the mill-leat for the former King’s Mill and Bishop’s Mill, which stood side-by-side at the western end of Mill Lane. These mills fell into disuse after the arrival of the railways in the 19th century, and were demolished around 1927: only the foundations which held the two former water-wheels still survive. The water-wheels discharged into a mill pool which fed the main stream of the River Cam along the Backs. The River Cam along the Backs is probably an artificially straightened and widened canal, constructed before the colleges arrived, to enable commercial vessels to reach the mills.

The western branch becomes the mill-leat for the former Newnham Mill, which remained in business until 1910, of which the building still survives as a restaurant. The water-wheel of Newnham Mill discharged into a stream which originally remained separate from the main river, crossing the line of the present Silver Street close to the Old Granary of Darwin College, and forming the boundary between Queens’ College and Queens’ Green, then joining the main stream of the river at the northern tip of the Grove. 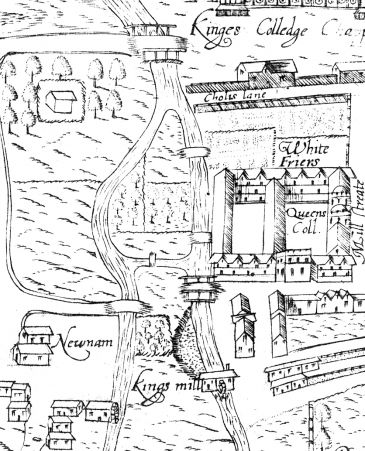 This map shows the original layout of the mills and their outfalls, as they were in 1574. Silver Street, then called Small Bridges Street, did not exist west of the main river. Instead, there were small bridges connecting the roads on either side to an island between the two streams.

The large mill-pool which now exists south of Silver Street had not, by that time, yet formed.

There is an east-west ditch connecting the two mill streams together just north of the line of the Small Bridges: this east-west ditch marked the southern boundary of the college land west of the main river, which itself was another island, between the two mill-streams. 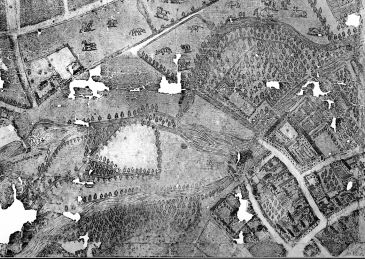 In a slightly later map of 1592 (west upwards), it can be seen that the outfall streams from the two mills have united to form a pool south of the Small Bridges. It is fairly clear that this pool offered a more direct route for commercial vessels to reach the Newnham Mill. The land between the two small bridges has become a causeway, water on all sides.

The branch stream around the west side of the Grove is still in existence, leaving the new pool opposite the end of an island, which possibly later became the Darwin College island. This stream has only a small bridge over it, at the southern tip of the causeway.

There is also evidence that Queens’ Green was so low-lying that other streams of water circulated around it. The green is shown being used for cattle grazing.

In this 1688 map (west upwards) the two small bridges to the causeway are labelled 24.

A bridge between the north end of the Grove and the north-east corner of Queens’ Green was possibly associated with the creation of Erasmus’s Walk in 1684. This bridge would have been too low for commercial vessels to pass under it, but in all probability no commercial vessel had used this route since the mill pool had opened up south of the Small Bridges causeway.

Around 1756, the smaller of the two small bridges had been removed, and the stream from the Mill Pool to Queens’ Ditch filled in and replaced with a culvert, or tunnel. This was done because the old small bridge had proven too weak to take the building supplies needed for the erection of Essex Building 1756–60. The Small Bridges causeway on which the road ran was now connected to land at the Newnham end, but still surrounded by water on three sides. 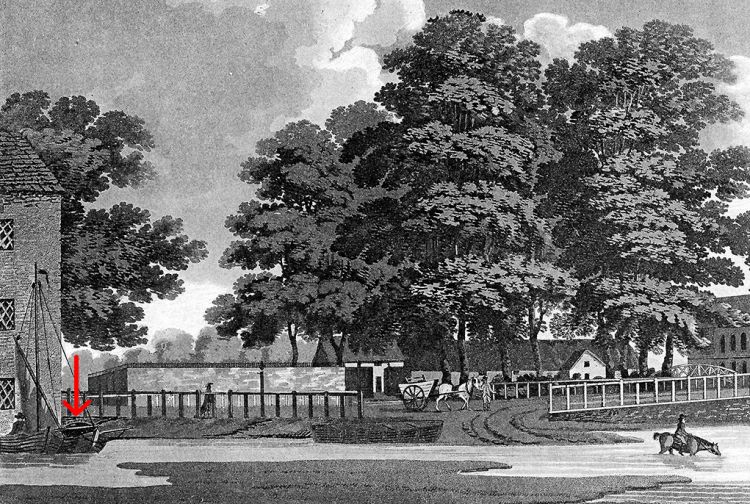 In this 1798 view of the Small Bridges causeway, the arch of the entry to the culvert feeding Queens’ Ditch from the mill pool can be seen just to the east of the Old Granary building, partially obscured by a moored boat.

As can be seen, the level of the causeway was quite low in relation to water-level, and it was often washed away in floods. The Borough Corporation made the land around the causeway into a municipal rubbish dump for many years, in order artificially to raise the ground level. This extended to the adjacent Queens’ Green as well, where the process of raising the ground level of the green lasted up to the 1890s. 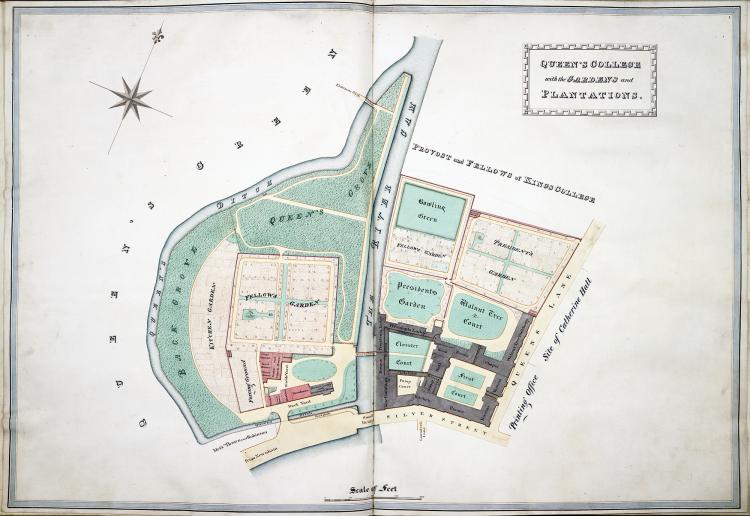 A plan from around 1825 shows, in more detail, the route of the ditches around the south and west boundaries of Queens’ land. 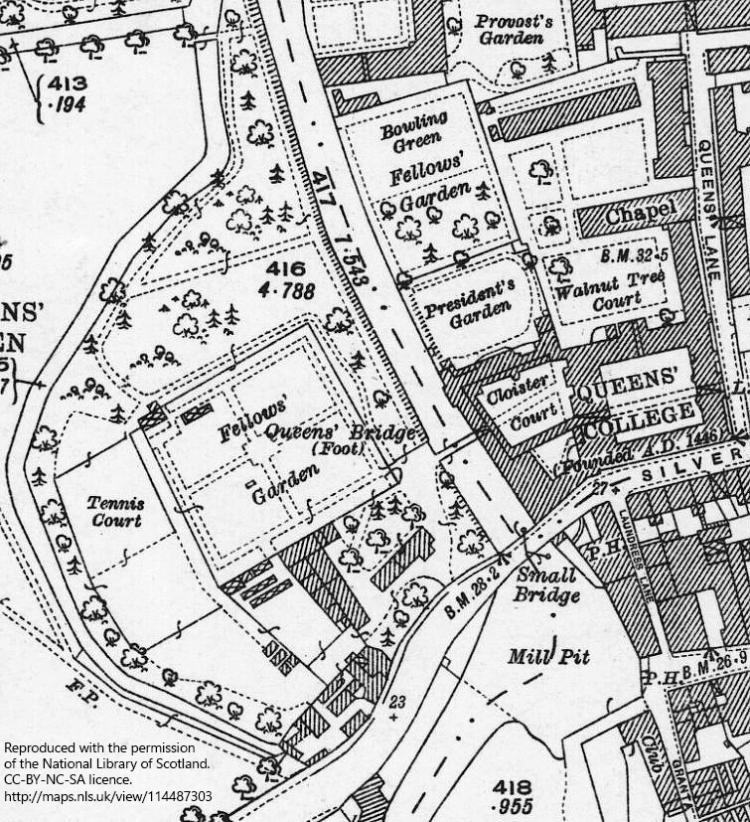 In 1841, the east-west ditch along the southern boundary of Queens' land was filled in, probably in connection with the construction in 1841 of the cast-iron Silver Street bridge instead of the old one of wood.

Also, either then or at some other time, Queens' acquired the land between the former ditch and the roadway, and buildings began to appear on that land.

This 1925 map shows the new arrangements. Queens’ Ditch has become a dead end, although still fed with water from the mill pool via the 1756 culvert, or a later replacement. 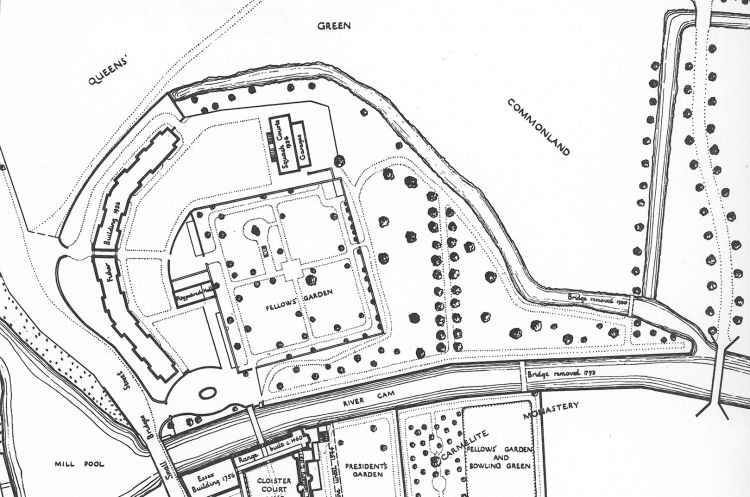 In 1935, Queens re-developed the southern part of its land west of the river, building what became Fisher Building. The dead end of Queens’ Ditch was back-filled. There was an exchange of land with the borough corporation intended to straighten and widen Silver Street, which resulted in a re-alignment of the boundary between the college and Queens’ Green, such that the former route of the ditch now lies under the Green, outside the boundary of the college.

An extended conduit fed the newly truncated end of the ditch. 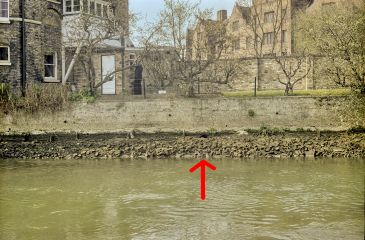 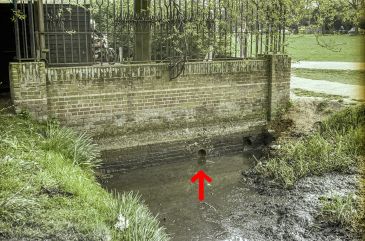 The inlet and outfall of the present conduit from the Mill Pool to Queens’ Ditch can be seen when the water level of the River Cam is lowered (by adjusting the sluices at Jesus Lock).

The point of entry from the Mill Pool is indicated on the left, in a photograph taken before the Darwin College Library was built. This location is probably now under the lower end of the external staircase.

The outfall of the conduit into Queens’ Ditch is shown on the right.