The Old Kitchens were the location of the original kitchens of Queens’ College, built in 1449, to serve the Old Hall.

The kitchen, as originally built, had three fireplaces (on the east, south, west walls) for cooking, with massive relieving arches and flues above. The kitchen has been re-modelled many times in the life of the college: over the years the east and west fireplaces fell out of use, but the south fireplace was in use for cooking up until 1912, after which it appears that gas cooking took over. The kitchens expanded into the ground floor of Essex Building at some stage, breaking through the back of the former west fireplace to do so. In 1912, probably associated with the increase of residents after the Dokett Building was occupied, the kitchens underwent a major refit, and the last remaining open fireplace ceased being used. 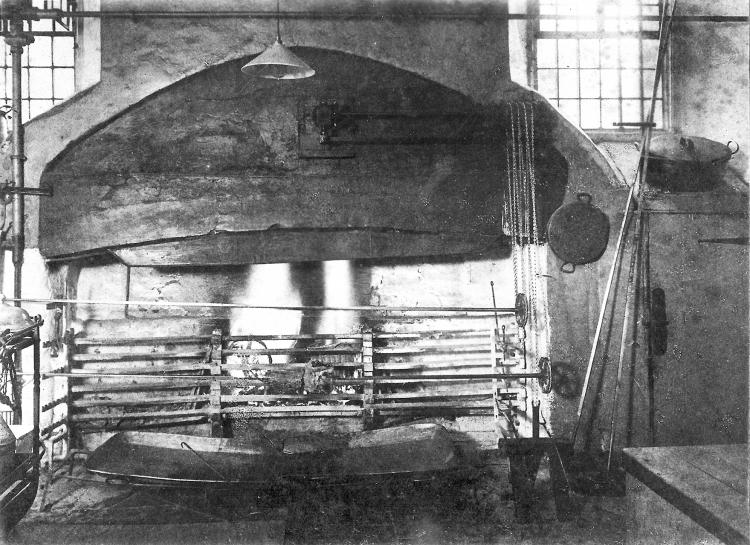 This photograph shows the cooking arrangements of the south fireplace before they were scrapped. An open fire sends hot gases up the flue, inside which there is a fan, turned by the flue gases. The fan drives an axle through the front of the fireplace (seen roughly in the centre, just under the lamp shade) where bevel gears transfer the rotation onto a long axle to the right, where pulleys drive chains. The chains come down and cause the roasting spits to rotate in front of the fire, automatically turning the joint of meat being roasted. A large pan underneath collects the fat from the meat as it cooks. Thus, long before gas or electricity were used in the kitchen, it was possible to have an automatic roasting spit. 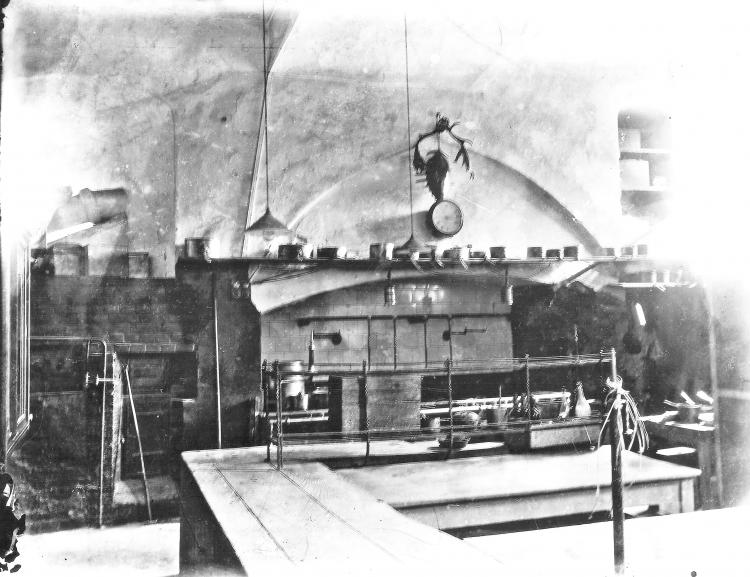 Another view of the kitchen before the 1912 refit, looking towards the remains of the east fireplace, which appears to be no longer in use, although its flue is being used for some other apparatus on the far left. This photograph suffers from some camera shake during the long exposure, but the main layout is clear.

Above the clock are some antlers and a turtle shell, presumably the relics of some earlier dinner.

Somehow, the entire college was fed from this kitchen. 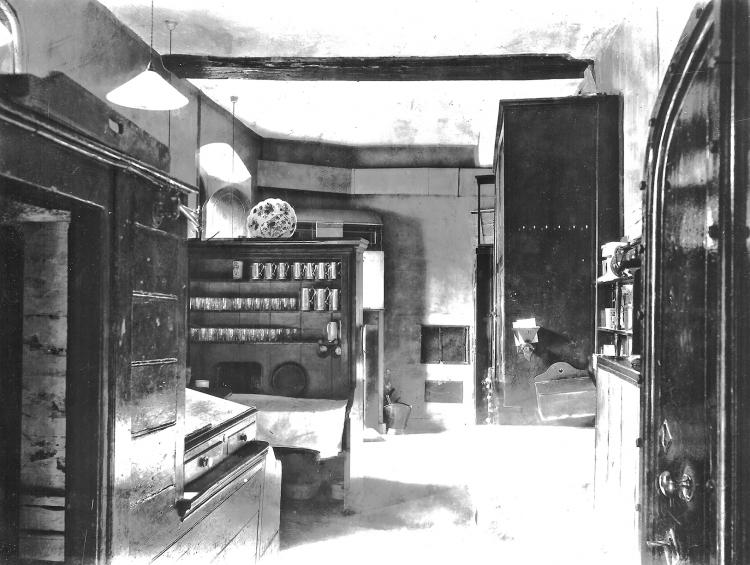 A view of the Buttery, before it was made smaller in 1912 in order to enlarge the kitchens, taken through the east door of the screens passage, looking south. The far wall would be moved towards the viewer so that the far window became part of the kitchen.

On the left is the entry to a staircase down to the cellars below, which was removed during the 1912 refit. 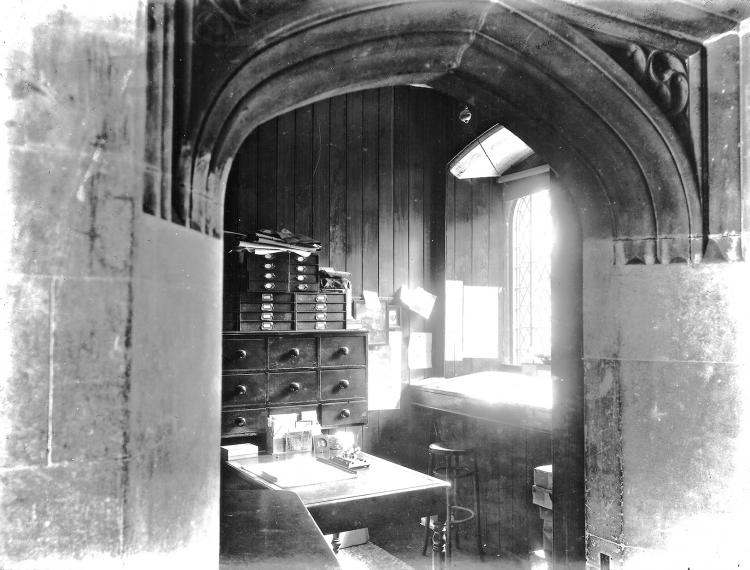 The Butler’s Office, taken through the west door of the screens passage, looking south-west.

The 1912 refit appears to have been substantial, and affected also the rooms above the kitchens in staircase I, which were all reorganised and remodelled: so much so that it is no longer truly possible to identify where Erasmus might have lived and worked. Apart from the panelling in room I1, almost nothing survives in other rooms from before 1912. On the ground floor, the kitchens were expanded northwards at the expense of the buttery rooms. The former north wall of the kitchens, which had been a load-bearing wall holding up the dividing wall between I1 and I2 above, was replaced with a massive steel joist. The ceiling of the kitchens, also the floor of I2 above (now called the Erasmus Room), was replaced with a concrete ceiling/floor supported by steel joists.

In 1931, the kitchens were enlarged by the addition of a single-storey extension in Pump Court. In 1937, probably prompted by the expansion of student numbers following the arrival of Fisher Building, the kitchens were again re-fitted. At some time, the kitchens also expanded into the ground floor of C staircase, Old Court, through the back of the former east fireplace. Because the Hall was too small to accommodate one year of students at dinner, the Erasmus Room (formerly the Bernard Room) became an overflow dining room, served by a dumb waiter from the kitchens below.

With the opening of the new Dining Hall and Kitchens in Cripps Court in January 1979, the Old Kitchens were finally closed, stripped out and gutted. The Buttery rooms north of the Old Kitchen were refitted as forward kitchens and wash-up for servicing functions in the Old Hall, Munro Room, and Old SCR, with the primary cooking having being done in the new kitchens. The Old Kitchens themselves, associated sculleries, and rooms in Essex Building, were left un-redeveloped: at that stage there was uncertainty about what Phase 3 of Cripps Court would be able to offer, so the Old Kitchens and surrounding area were held in reserve for a possible College Centre, or a small theatre. Without prejudice, the college Table-Tennis Club for many years used the derelict kitchens as their home.

Phase 3 of Cripps Court became what is now known as Lyon Court, with the Fitzpatrick Hall theatre, squash courts, new table-tennis room, and so on. It was apparent that there was no longer any need to hold back redevelopment of the Old Kitchens, and planning began for refitting them as a general purpose reception room or small dining room. Some consideration was given to demolishing the single-storey scullery building in Pump Court, but it was found that so much damage had been done to the fabric of Essex Building behind that it would not be possible to restore Essex Building without unsightly scars. So the scullery building was re-purposed as a lobby to the Old Kitchens, associated cloakroom, and toilets.

In the 1990–91 redevelopment of the Old Kitchens, the scheme adopted was to leave exposed any mediæval features which had survived, and to plaster over all later alterations, or damaged parts. 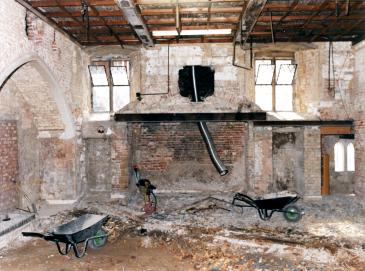 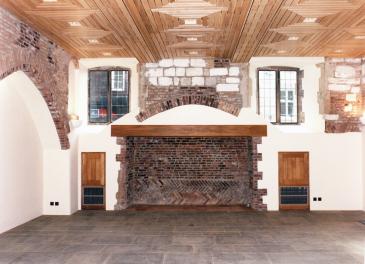 The south fireplace before refit

At the extreme left can be seen the blocked doorway which had formerly led to the area appropriated from C staircase. At the top can be seen the steel joists holding up the concrete ceiling, or floor to the Erasmus Room. The dumb waiter to the Erasmus Room had been where two small windows can be seen at ground floor level, on the right. The previous extract ventilation system had left large holes in many places, which were patched with new bricks. At the bottom of the back of the fireplace can be seen bricks laid herring-bone pattern: this is typical of mediæval fireplaces. The windows to Silver Street were reglazed with rectangular lights, triple-glazed to reduce traffic noise. A ducted fresh air supply was fitted on both sides of the fireplace. 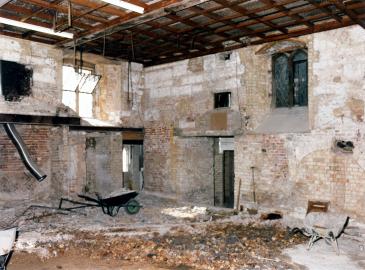 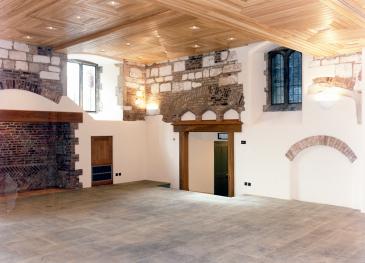 Above the former west fireplace can be seen three small structures, which are thought to have been bread-ovens, heated at low temperature by the flue-gases of the fireplace below. The low blocked doorway might have led to Pump Court, before I staircase was enlarged in the 18th century. 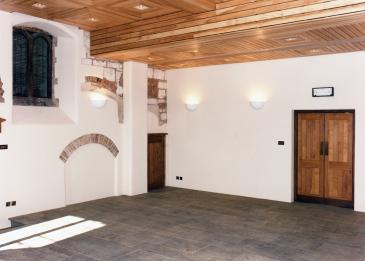 The large brick pillar is holding up the massive steel joist which is where the north wall of the kitchen used to be before 1911. The steel joist is supporting the wall between the Erasmus Room and set I1 above, including the fireplace of I1 and associated chimney stack.