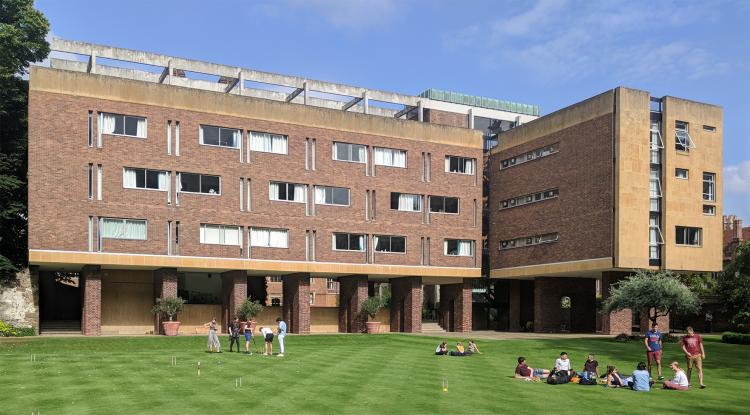 Erasmus Building is named after Desiderius Erasmus of Rotterdam, a famous scholar who studied and taught at Queens’ 1510–1515.

Erasmus Building was erected 1959–60 to the design of Sir Basil Spence, architect. It was the first building along the Backs to be designed in the Modernist architectural tradition, and echoes some of the ideas of Le Corbusier, such as the use of pilotis to raise the building above the ground, leaving a clear view from Friars’ Court down to the river (a view which had previously been blocked by a solid garden wall).

Evolution of the design 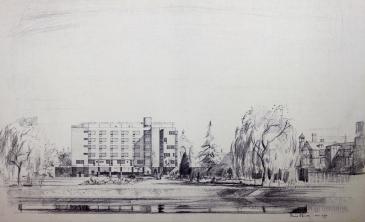 The earliest sketch we have of a potential design for the building (which later became known as the Erasmus Building) is of a five-storey building. This sketch, dated November 1957, seems to have been private to the college, and was not publicly released. 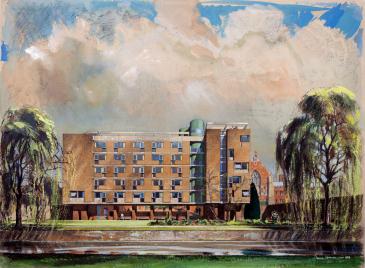 After some modifications in January 1958, the design was presented to the college as a coloured perspective impression, and to the public by means of a monochrome reproduction in The Times of January 31st. This provoked a public controversy, in the letters column of The Times, The Cambridge Review, and elsewhere. The design was explained further in the February 14th issue of The Builder, pp. 298–​9, and in the February issue of Prefabrication, pp. 150–​4. 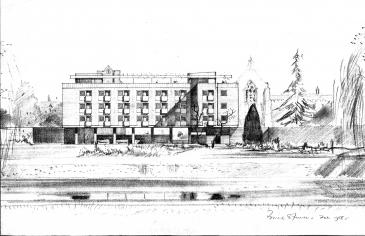 In response to the concerns associated with the first public design, in February 1958 the architect reduced the scale of the building to three storeys, while retaining almost the same amount of accommodation by extending the southern wing further towards the river. The fenestration is slightly simpler than it had been on the 5-storey design, although it appears that each room had a small balcony. 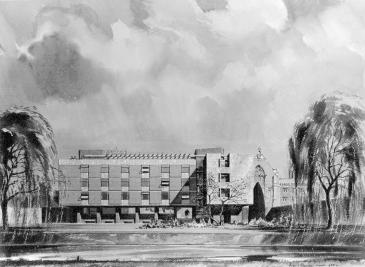 By March 1958, a design with yet further simplified fenestration had appeared. It had regularly-spaced vertical windows which rotated about a horizontal axis to open. A horizontal stone string separated each storey, as in the earlier 5-storey design. This design was shown at the British Academy Exhibition. [Architects’ Journal, 1958 May 8, p. 683] 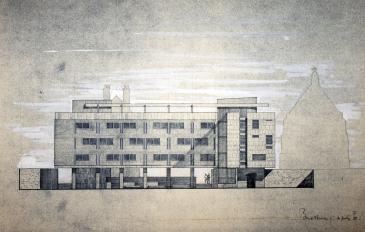 A new variation of design appeared, this copy dated 16 July 1958, the earliest which resembled the building as finally built. The windows have changed to be horizontally sliding sashes, with two vertical slit windows per bedroom (one in each corner): the large horizontal sashes alternate in offset on each storey. The stone strings between storeys have gone, to be replaced by new vertical alignments, rising from the brick piers at the bottom, through pairs of vertical slit windows, to the supports for the roof pergola. These vertical alignments were intended to reference the spacing of the buttresses of Bodley’s chapel nearby. [Daily Telegraph, 1961 Jan 2, p. 14, and Campbell 2011 p. 390] 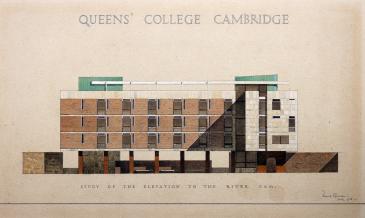 An elevation, dated July 1958, of what appears to have been a hybrid design, incorporating the vertical windows and stone strings of the March design, with slit windows similar to the 16 July design. Alternatively, it might have been an evolutionary intermediate step between the previous two designs. This variation was not seen again. 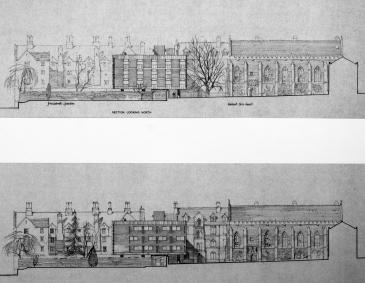 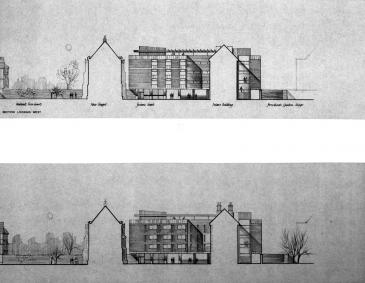 A comparison of design options III (top) and IV (bottom) dated 1958 July 22, viewed from the south (left) and east (right). Judging by what was finally built, option IV was chosen. 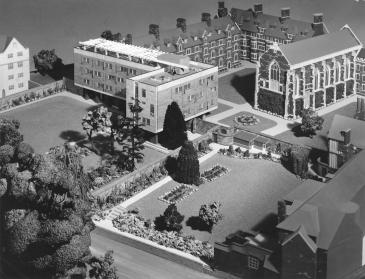 The final design, in a 3D scale model of college, as published in December 1958. This design received approval from the Royal Fine Art Commission and from the Governing Body [Criticized building redesigned : Two storeys fewer at Queens’ College, in The Times, No. 54329, 1958 Dec 9, p. 12]. As far as can be discovered, there was no public reaction to this scheme.

One of the changes from earlier designs was to omit taking staircase L up to the roof. The existing garden wall shown in the model passing under the building was in fact replaced by a new, lower, wall.

Despite being of modernist tradition, the design deliberately references features of the college around it. Basil Spence wrote:

the idea of placing the building on a colonnade is not new to this College as Cloister Court is treated in this way, and indeed I can say that the seed for the architectural idea rests in Cloister Court, which was very closely studied for character and rhythms before this building was designed.
[An addition to Queens’ College, on the Backs, Cambridge, by Basil Spence, in The Builder, Vol. 194, No. 5994, 1958 Feb 14, pp. 298–​9] 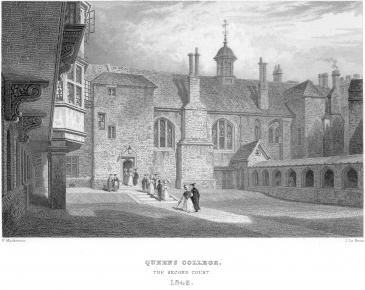 The contextual references include: 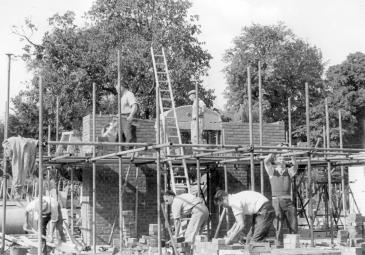 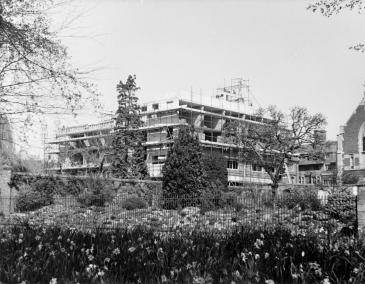 Left: construction of a brick pier and arch, September 1959. 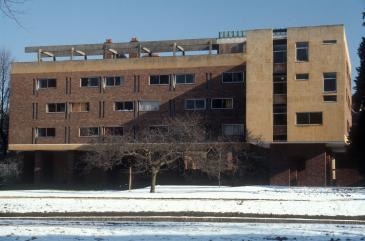 The Erasmus Building originally contained 43 study-bedrooms for students, plus two sets and a study for Fellows. It was occupied for the first time in October 1960.

Two shades of red brick are used: darker for the piers, and lighter for the elevations. The stone cladding is Guiting stone. The original 5-storey design had a prominent copper-clad staircase, the vestigial remains of which can be seen in the copper cladding of the roof housing of staircase K.

The Erasmus Building is unlike many traditional Cambridge college buildings in being designed internally on a corridor principle, fed by only two staircases. It was the first student accommodation in Queens’ to have central heating (fed from boilers in the basement of Dokett Building), and thus no chimneys or fireplaces in the rooms. To make up for the loss of the fireplace, an electric fire was fitted in each room, topped by a stone shelf, which also concealed the finned tube of the central heating. Originally, on the corridor side, the rooms had built-in furniture, comprising wardrobe, concealed wash-basin, and bookcase, in a dark hardwood veneer. The floors of the corridors and rooms were made of polished strips of afzelia. The door-frames, etc., were of afrormosia. Communal bathrooms, WCs, and gyp-rooms were placed on north-facing elevations, both in K and in L. The tiny gyp-rooms were little more than a row of gas burners and a sink: they later proved to be inadequately sized when refrigerators needed to be accommodated. 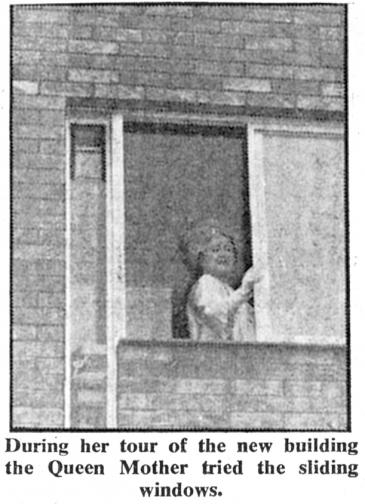 The formal opening ceremony was performed by the Patroness of the College, the Queen Mother, on Monday 5th June 1961.

When Sir Basil Spence’s ERASMUS BUILDING was designed and illustrated and went up in 1959–​61, there was great commotion over this desecration by a modernistic building of part of an ancient site and of the river view from the Backs. Yet this seems now, ten years later, such a harmless building, well sited and not in the least clashing with the Victorian and Edwardian buildings with which it forms a court. And whereas we now object to the fashion of slit windows which are no use to the inhabitants of the rooms, people then objected to the sheerness of the blocks which we now bless when such wild excesses are committed everywhere in outlines and skylines.
[Cambridgeshire, by Sir Nikolaus Pevsner, 2nd edition, 1970, pp. 139–​40]

In 1997, all 43 student study-bedrooms on K staircase were refurbished with en-suite WCs and showers, the first such conversion in Queens’. The former dark veneer built-in furniture was swept away to make way for the en-suite cubicle, and some of the dark veneered panels were recycled to make new bookshelves over the stone shelf. The finned tubes were replaced by higher output radiators, and the electric fires were removed. The space released by the former communal bathrooms, WCs, and drying rooms allowed the gyp-rooms to be enlarged and upgraded in later years, and two supervision rooms to be created on staircase L.

In 2014, the open staircase was enclosed in a glass lobby with powered doors. The enclosure was completed in early 2017 by a glass door closing an arch in the brick pier which formed the base of the staircase well.

The contrast between the traditional mock-Tudor 1955 Holford building and the modernist 1959 Spence building on adjacent sides of the bowling green is an architectural talking-point.

The summer 1997 en-suiting project over-ran into the Michaelmas Term, and for several weeks 43 undergraduates were accommodated in the spare bedrooms of Fellows and staff throughout the city, or on the floors of friends elsewhere in college. One of the displaced students happened to be a grandson of a writer of one of the letters of protest to The Times in February 1958.

Punt chauffeurs and other tourist guides can frequently be heard asserting that the Erasmus Building’s pilotis and windows were designed to look like trees and leaves. This story, for which no contemporary evidence can be found, appears to be a complete fabrication.