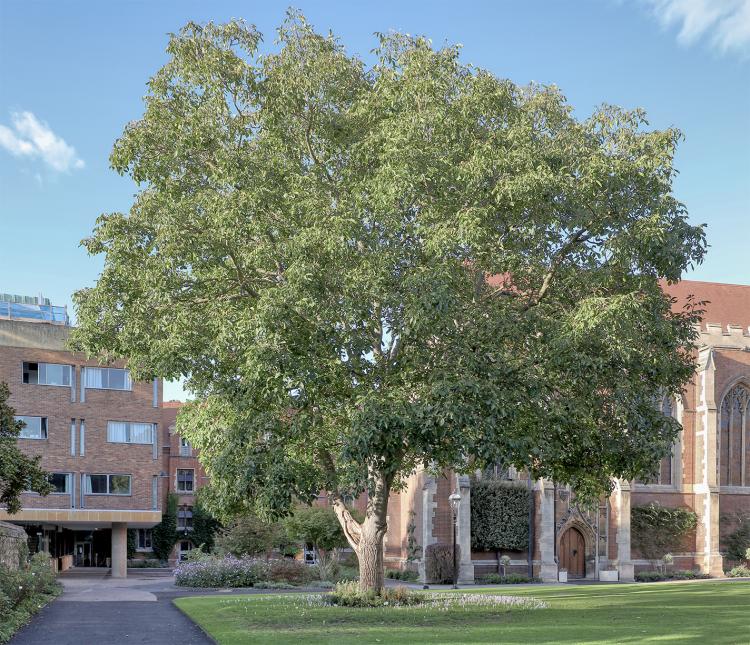 The tree after which the Walnut-Tree Building, and Court, were named was not at the position of the present walnut tree.

The original walnut tree, from which the court takes its name, grew where the Chancel steps of the new Chapel now stand, and from the wood of the tree there was made a table which is now in the Guest Room.
[The Dial, No. 73, 1933 Lent, pp. 3–4. The table is now in the Essex Chamber of the President’s Lodge] 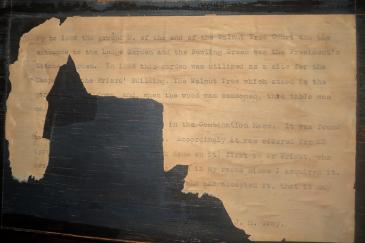 That tree was felled ca. 1886 as part of the preparations of the site for the new Friars’ Building and new Chapel [Label glued to underside of table].

On 1842 March 12th the Cambridge Chronicle reported: During the hurricane that raged on Wednesday night and Thursday morning the fine old walnut tree in Walnut Tree Court, Queens’ College, was blown down. It is not clear whether this report relates to the older tree (above), or to the tree at the current position, at the west end of the court. However, since the older, northern, tree was large enough by ca. 1886 to have had a table made from a section of its trunk, it is unlikely to have been a tree planted on the site of one that blew down in 1842. So, it is likely that this newspaper report relates to a walnut tree close to the site of the present tree at the western end of Walnut Tree Court. This in turn suggests that it is possible that a tree planted to replace the one that blew down in 1842 was the one which survived to 1932. 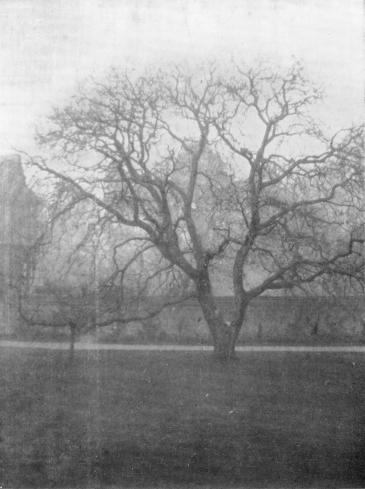 In 1932, the remaining walnut tree was found to be diseased, and had to be felled:

The Walnut Tree that stood at the West End of the lawn in the Walnut Tree Court was found to be badly diseased & had to be taken down. Felling operations commenced on Monday 28 November 1932.
[General Ledger 1928–39, p. 380]

The large walnut-tree was suffering from a fatal disease and has had to be cut down. A new one will be planted in the Spring.
[The Dial, No. 72, 1932 Michaelmas, p. 7] 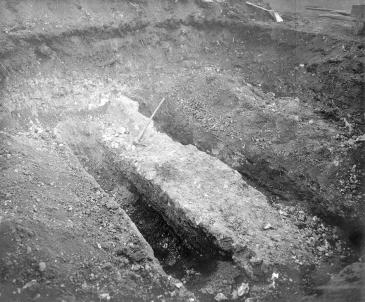 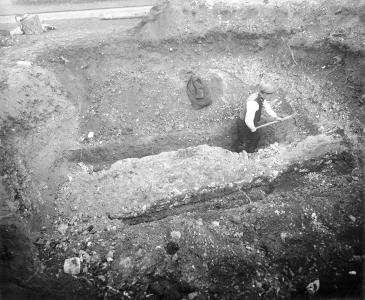 When the roots of the felled tree were dug out, the foundations of a large wall were discovered: possibly this was associated with the former Carmelite monastery on the site. If so, this wall might have marked the southern boundary of the monastery.

As most of the College will already know, when the Walnut Tree was removed, there was found, four feet or so below the surface of the lawn, an old wall two to two-and-a-half feet wide, which seems to have been the boundary wall of the old priory. There was also unearthed a good deal of building rubble and tiles. … The tree which has just been taken down was planted around 1780 — a Nüremberg token dated 1770 was found among its roots. The actual cause of its death is uncertain, although it may well be that the disease was a result of the existence of the wall. The present tree was presented by Mr Rogers [William Stephen Rogers (1903–1973), matric. 1922], of East Malling Government Research Station.
[The Dial, No. 73, 1933 Lent, pp. 3–4. The planting date given cannot be reconciled with the 1842 report] 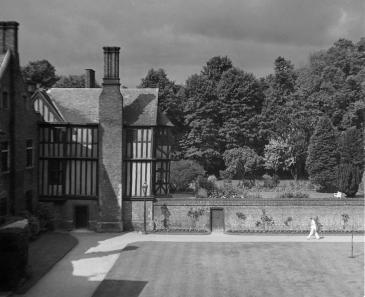 There were two attempts to plant a new walnut-tree in 1933:

It is this tree from October 1933 which survives today in Walnut Tree Court. 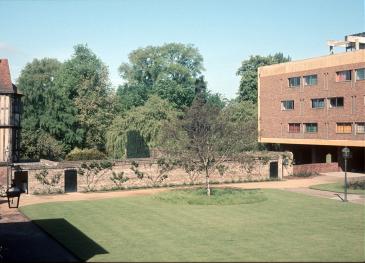 The tree grew slowly, and reached this size by June 1969. 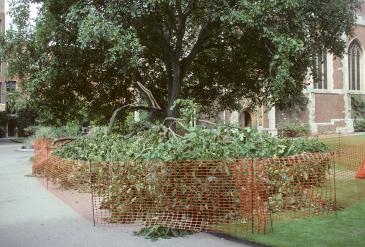 In August 2005, the walnut crop was so heavy that two low-hanging branches tore themselves off the main trunk of the tree, and collapsed to the ground.

The scars of this event are still visible on the tree. The tree was subsequently re-balanced and other low-hanging branches removed. However, rot set in around the scar, and this rot might ultimately kill the tree.