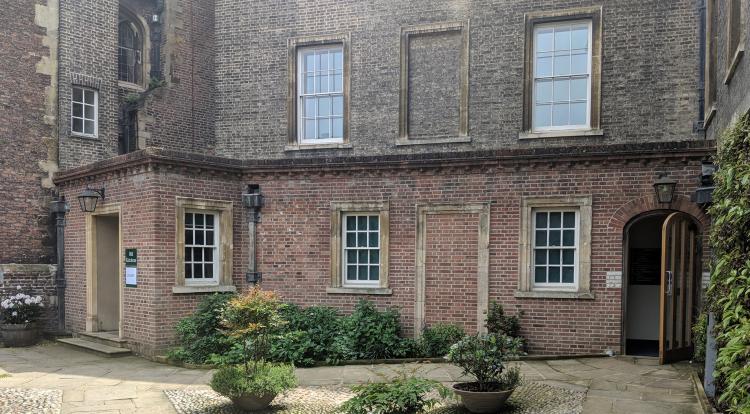 In 1931, a single-storey extension to the college kitchens was built in Pump Court, in front of parts of the ground floor of the Essex Building.

The extension provided a new scullery and wash-up, and also served as an access corridor from the kitchens to the ground floor areas of Essex Building, which were re-modelled as a staff room and toilets for the kitchen staff.

The architect was Cecil Greenwood Hare, and the builder was William Sindall.

The building was described:

During the Long Vacation a new building made its appearance in Pump Court to provide adequate accommodation for the waiters and kitchen staff. We understand that there was considerable difference of opinion as to whether the new building should be of red brick to harmonise with that of the Erasmus Staircase, of or yellow to harmonise with that of the Essex building. We congratulate the architects on their compromise—a red brick which will before long tone well with the Tudor work, and stone window-fittings and lead gutters and pipes to match those of Essex. Both from an architectural and a practical point of view the work is pronounced a great success.
[The Dial, No. 69, Michaelmas Term 1931, p. 10]

The stone surrounds of the windows and doorways appear to be re-used stone from the original ground-floor Essex Building windows that had been obliterated by the extension.

In 1990, during the refit of the Old Kitchens, consideration was given to the removal of this extension building, but it was concluded that too much damage had been done to the fabric of Essex Building, so that it would be impossible to restore it without unsightly scars. Instead, the extension building was re-purposed as an entry lobby to the Old Kitchens, toilets for users of the Old Hall and Old Kitchens, and a cloakroom. A new entry was created (on the left of the photograph) to the lobby, and the original 1931 scullery door (centre) was blocked. The former kitchen staff room on the ground floor of Essex became a computer room in 1992.

An ancient vaulted brick drain runs under this building, with a man-hole preserving access to it. The drain appears to run from the original kitchen area, flowing towards the river.

This building was probably the last work of Cecil Greenwood Hare for the college: he died in 1932. Having inherited the practice of George Frederick Bodley, (Old Chapel, Old Hall, new Chapel) in 1907, Hare seems to have been involved in almost all college building work, some of it very significant, from about 1909 onwards.