Over the centuries, the college has had various gates to the public roads around its site.

On the west side of the river, the road now known as Silver Street, then called “Small Bridges Street”, and subsequently “Newnham”, was more like a causeway, with water on both sides. Before 1841, a ditch and stream separated the college land from the public road, as can be seen in the plan of 1825. The college had one entry to its site west of the river, carried on a small bridge across that ditch. We have no detailed images of that bridge and gate, but it appears in the 1798 Harraden print of college. The ditch was between the white fence on the far side of the causeway, and the wall behind. In front of the gates there was a flat bridge spanning the ditch. The gates led to a yard with stables and coach houses, and would have been wide enough to get horse-drawn coaches in and out of the yard behind.

In 1841, the ditch was filled in, and the college seems to have taken possession of the land thereby gained, so that its boundary moved to the roadway. 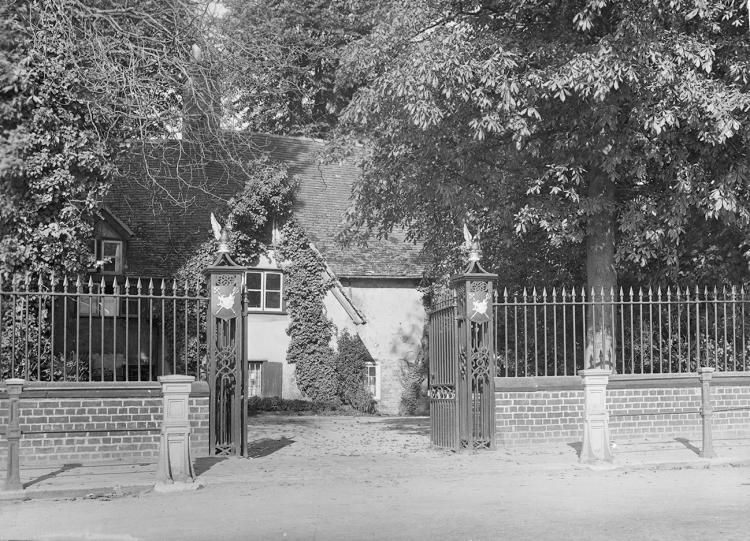 By the end of the 19th century, a low wall and railings had been erected separating the college land from the road, and the main gates to the site had moved eastwards, close to the location of the area later known as “The Round”. The location of these gates can be seen in the 1886 plan of Willis & Clark.

The eagles and boar’s heads on the wrought-iron gateposts were purchased in 1899. The eagle is a reference to the eagle rousant of the crest of the college’s heraldic arms. The boar’s head is the college badge.

For information about the cottage behind the gates, see: Demolished 1935. 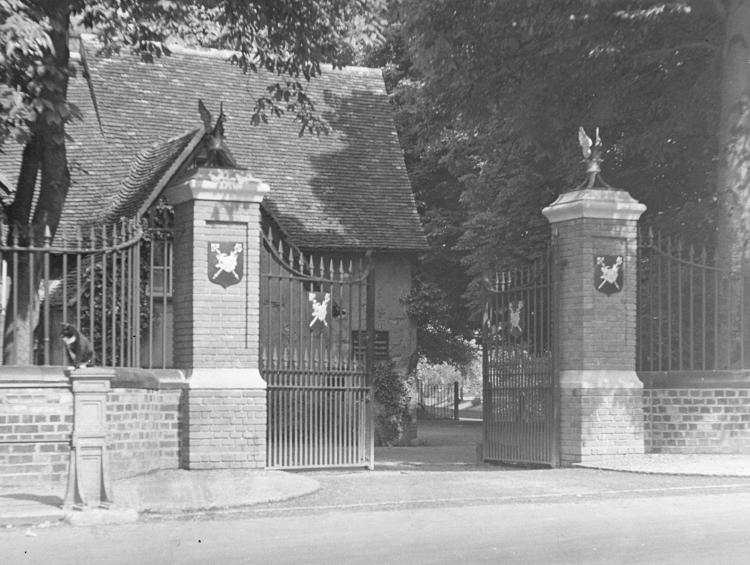 In the Long Vacation 1932 [The Dial, No. 72, p. 7], the gateway was set back further from the road, and widened. Larger gates were hung from brick pillars. The previous 1899 eagles and boar’s heads were re-fitted to the pillars, and a further set of boar’s heads added to the gates.

These gates lasted for only a few years.  In 1935 everything in this area was demolished, and Fisher Building erected in 1936. The eagles and boar’s heads disappeared into storage. 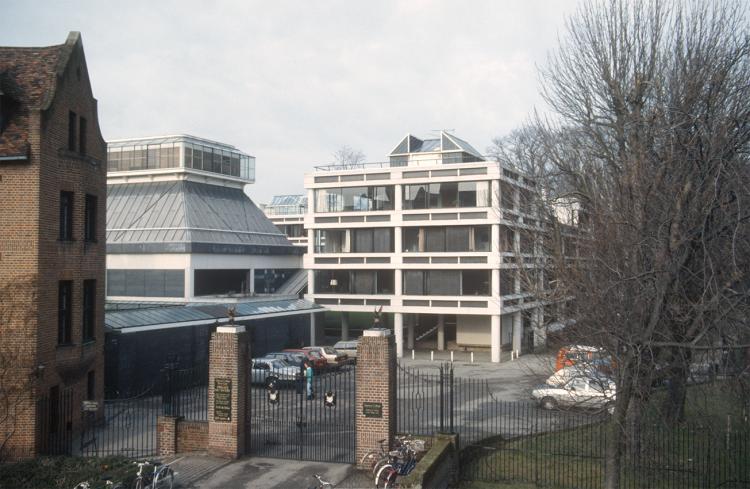 When Fisher Building was erected in 1936, the gates to “The Round” were set back from the road, along the outer line of the building. The gates were hung from large, plain, pillars of brick. A similar set of gates and pillars were once at the west end of the building, but these were demolished around 1971 to allow builder’s traffic in and out for the erection of Cripps Court.

In late 1978, the 1899 eagles and boar’s heads were re-discovered from storage. After refurbishment, they were added to the gates to “The Round”. A pad of white concrete was added to the top of the pillars to give a better sight-line to the relatively small eagles.

In 2012, these gates to “The Round” and their pillars were demolished as part of the works to enlarge the Porters’ Lodge. The eagles and boar’s heads were once again withdrawn into storage. The old gates, after having extensions welded into them, became the new vehicular gates to the Owlstone Croft site in 2018. 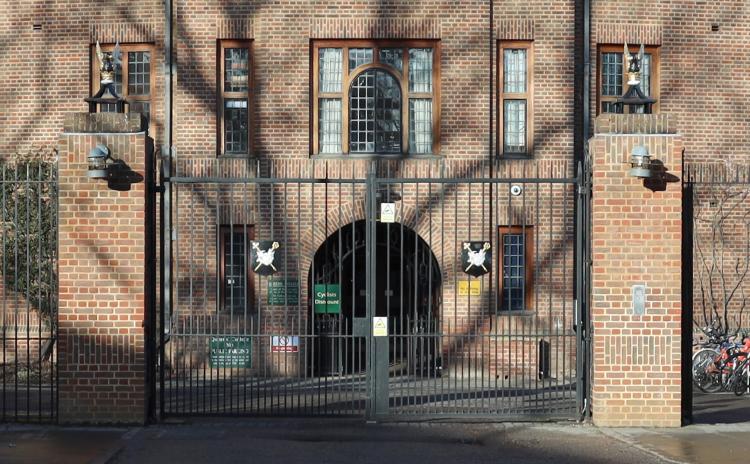 When Fisher Building had been erected in 1936, the security boundary of the college had been the building itself, with gates set in railings at both ends. After the gate at the west end had been removed for building works around 1971, it became difficult to maintain a proper security boundary. After Phase 3 of Cripps Court had been completed in 1989, it became possible to tidy up the site and consider the security problem. In 1994–5, railings were erected all along the low wall that marked the boundary of the site, with a new gateway across the vehicular entrance to the site outside ‘W’ staircase. The pillars for these new gates were designed to match those of the 1936 gates to “The Round”.

In 2018, these gates were fitted with the 1899 eagles and boar’s heads, again refurbished, which had been taken from the gates to “The Round” demolished in 2012.