Queens’ is the earliest example of a complete purpose-designed college in Cambridge. It incorporates all necessary components of a mediæval college in a single building: residences, dining hall, kitchens, library, and chapel. There are, of course, older colleges, some having absorbed older non-collegiate buildings, and older collegiate buildings, but none of those were built as a complete college from the outset.

The form of Old Court is approximately rectangular, with a square turret at (or near) each corner, and a large gatehouse in the eastern range, facing what was Milne Street (now Queens' Lane), a commercial thoroughfare from the town centre down to the mills. 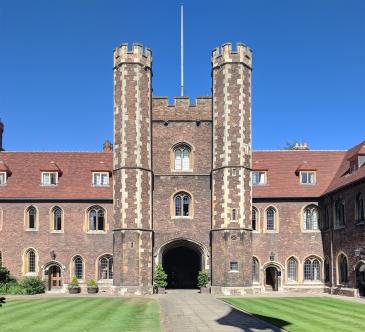 The rectangular gatehouse, with octagonal towers at each corner, is the earliest example of this architectural form in a collegiate context, complete and in its original location (the earlier 1426 gatehouse at King’s Hall was moved and substantially altered to become King Edward’s Tower at Trinity College, and the earlier 1441 gatehouse at King’s College was never finished above the ground floor, until the 19th century, and now forms part of the University central administrative buildings). Several later Cambridge colleges incorporate similar styles of gatehouse: Christ’s, St John’s, Trinity, and others less exactly. This gatehouse style was unique to Cambridge (Oxford had none in this style), but this style spread around the world as symbolic of an educational institution: consider, for instance, Blair Arch at Princeton University. 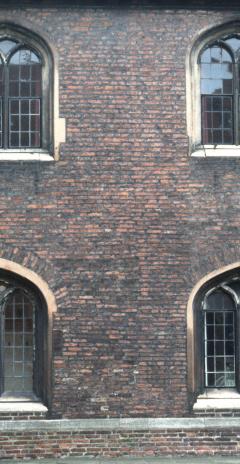 The college was built over two years. In the first contract of 1448, the north range (library, chapel), the east range (along Queens’ Lane, residences and gatehouse), and part of what is now B staircase residences on the south range were built. Then, in a second contract, in 1449 the remainder of the south range (along Silver Street, residences), and the east range (kitchens, hall) were built. The external load-bearing walls were made of clunch (a local soft chalk), with a thin skin of hard red brick, and the internal fabric is timber-framed. The junction between the two contracts can still be seen as a vertical line in the brickwork of B staircase: the bond of the brickwork is different on each side. The north-west corner, containing the Senior Combination Room, and President’s Study above, might have been added shortly afterwards. In the second, 1449, contract, the brickwork in the south range facing Silver Street is decorated with lozenges made from very over-baked bricks, which have turned almost green. The vast majority of the bricks that can be seen in Old Court are the originals, as laid in 1448/49, such has been their hard-wearing qualities: often better than the contemporary surrounding stone details.

Clunch is a soft chalk, which can be easily obtained from local chalk pits. But clunch has little weather resistance: the brick skin serves to protect it from the elements, rather than bear any load. The source of the red brick is not known: Cambridge clay makes a white brick, not red. Many of the red bricks are slightly over-baked, which has made them very hard and given them a smooth, slightly polished sheen. The choice of these cheap building materials meant that Queens’ could be erected very quickly by comparison with its contemporary, King’s College, where the specification of expensive stone, which had to be shipped in by river from far away, made progress very slow.

In the eighteenth century, many other mediæval Cambridge college buildings were externally lined with stone in classical style, and the gothic windows converted to rectangular sash windows. Queens’ escaped that fate, so that, today, Old Court, of all Cambridge courtyards, gives the best possible impression of what a mediæval college looked like. The worst that happened was that the cusps (vestigial tracery) were scraped off the stone gothic window frames: even so, the cusps survived in the north-facing first-floor windows of the Old Library, which had stained glass.

1448–49: Erection of Old Court. It has been suggested that the architect might have been Reginald Ely (co-parishioner of founder Andrew Dokett), who was then working as master mason on the early stages of King’s College nearby. [Andrew Doket and his Architect, Arthur Oswald, Proc. Cambridge Antiquarian Society, Vol XLII, 1948] 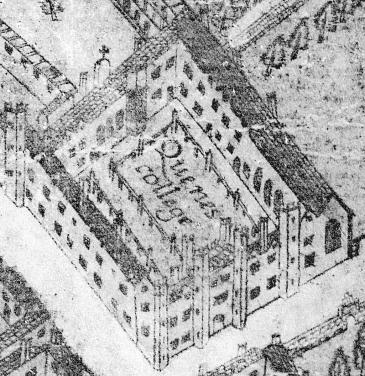 1592: This detail from the bird’s-eye view by John Hamond, published February 1592, is the earliest reasonably accurate view we have of Queens’. Points to note: 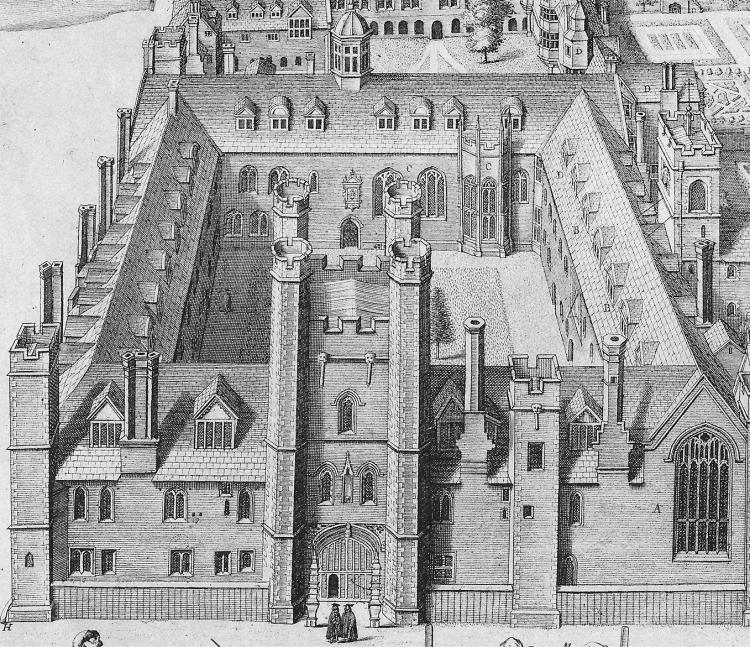 1685: This detail of the Loggan view of 1685 shows the layout of Old Court as it was then. Points to note are: 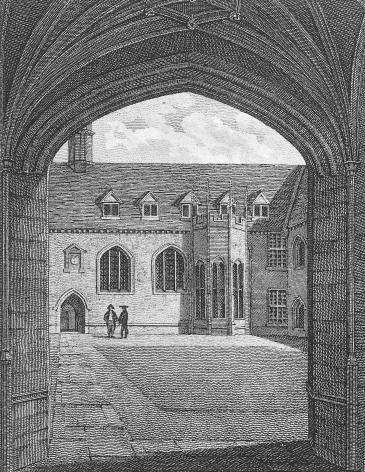 1814: View drawn and engraved by John Greig, published in Vol 2 of History of the University and Colleges of Cambridge by George Dyer in 1814. Points of change to note: 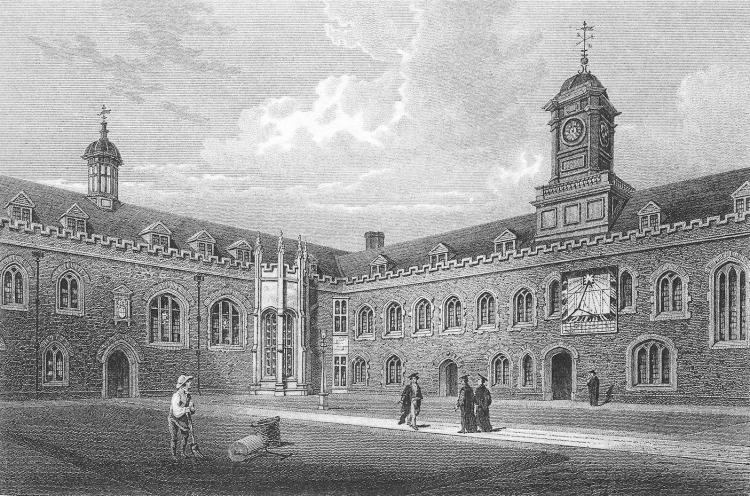 1829: View drawn and engraved by James Storer and Henry S. Storer. Published in Illustrations of the University of Cambridge (second series), in part form 1829–1832.

Points of change to note: 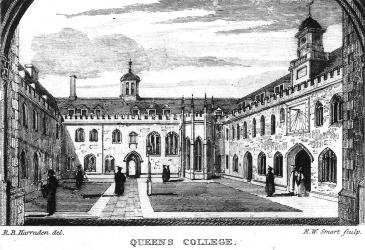 Of a similar period to the print above, but with less detail, and less accurate. Almost all shadows, of people or of the lamp-post, point in different directions! 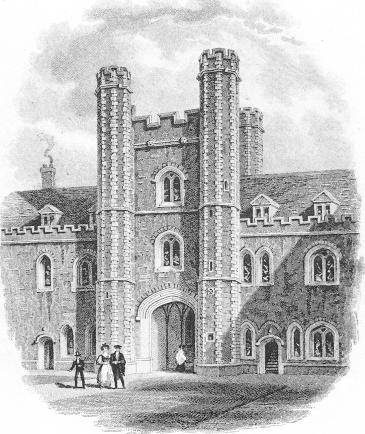 Of a similar period to the previous two prints, showing the effect of the battlements on the east range and gatehouse. 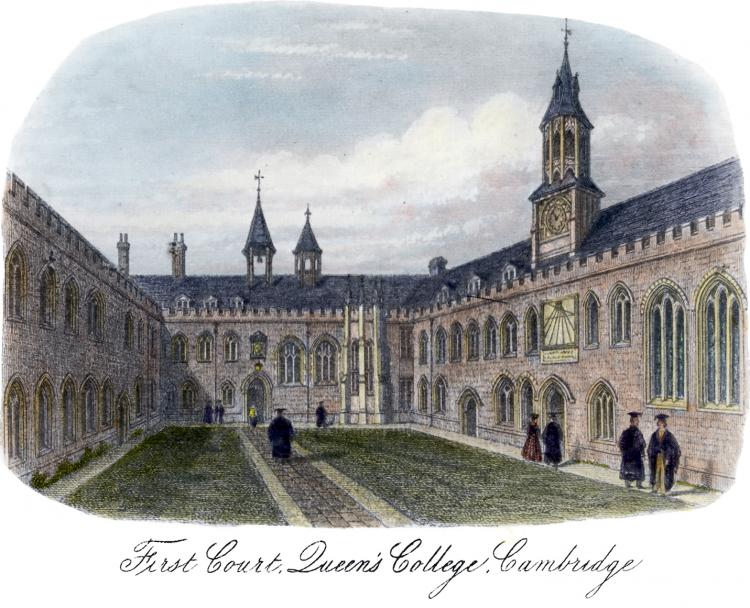 This is a modern reproduction of a print of unknown origin and date. The date of the drawing must be after 1848, when the Brandon clock tower was erected, but before tracery was added to the chapel windows, which must have been done before the Rock print of 1851, below. The print is similar in style to those in the Rock series of the 1850s, but it is not identified as being by Rock. 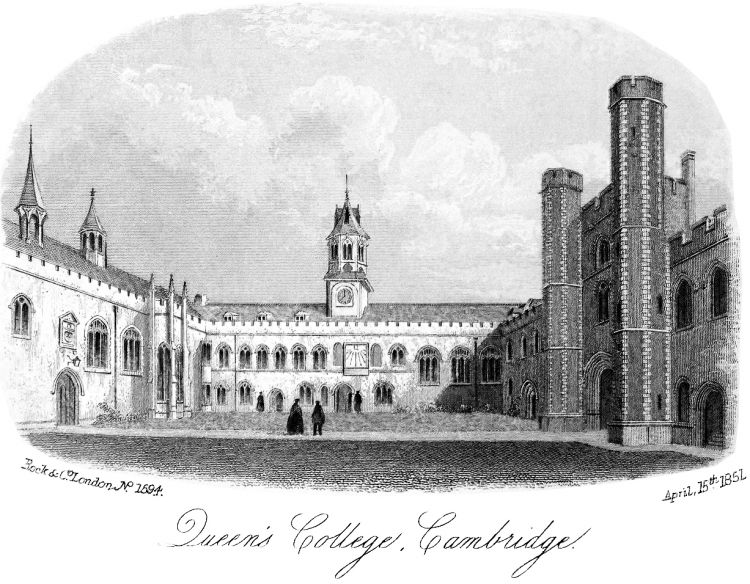 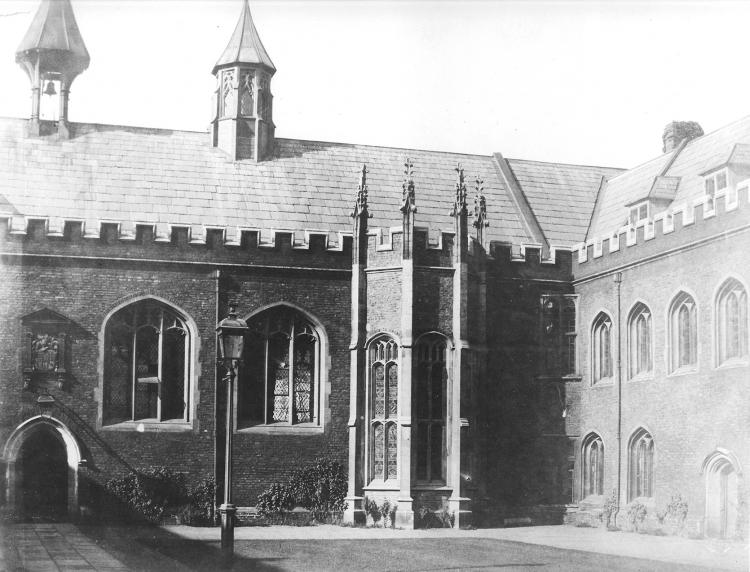 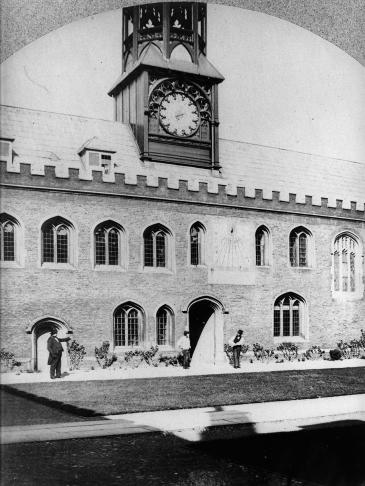 A photo of the north range, also probably by Robert Cade, ca 1857. Points to be noted: 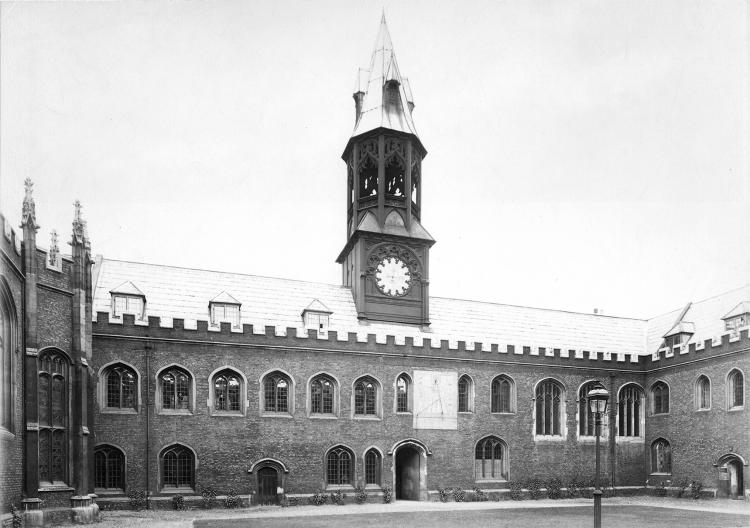 1891: A rather fine parallax-corrected photograph of the north range and Brandon clock tower, 1891. Points to note:

1909: The roof over the west range (Hall and Kitchens) was renewed, in red tiles, and the battlements removed.

1910: The roof over the north range (Old Library, Old Chapel), and E staircase of the east range, was renewed in red tiles, and the battlements removed. The Brandon clock-tower of 1848 was taken down, and replaced by the present clock-tower, to the design of Cecil G. Hare, architect.

1926: The roof over the south range, and A staircase of the east range was renewed in red tiles, and the battlements removed. 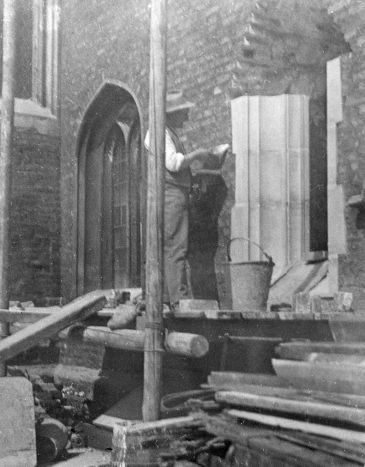 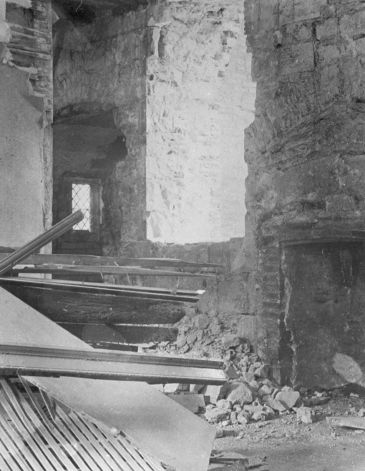 1934: Interior of E staircase gutted and rebuilt to the design of George Carr Drinkwater (1880–1941). Porters’ Lodge moved from south side of gate tower to north.

Drinkwater was later to be the architect of Fisher Building, and many design features of his internal work in E staircase can be seen again in Fisher.

1957: Kitchens refitted, and expand into the bedroom of C2.

1964: Erasmus Room refitted and furnished as an overflow to the Hall.

1964: Room B2 converted to the A.D. Browne Reading Room, including display cabinets for Browne’s collection of prints of the college.

1965: Former Lower Library made into a new extension of the Combination Room, and named the Munro Room.

1967: South eastern tower of Old Court, at junction of Queens’ Lane and Silver Street, having become structurally unsafe, was rebuilt.

1979: Closure of Kitchens, and Hall ceased being used on a daily basis, as the new kitchens and dining hall in Cripps Court open.

1983–4: Room C1 restored to residential use after having been part of the old kitchens.

1993: Room C2 stripped back to its original timber framing.

1994: Room B1 stripped back to its original timber framing.

1995: Room B2 (the A.D. Browne Reading Room since 1964) was restored to residential use. A half-timbered wall (removed in 1964) was faked. Original fireplace restored to use.

1996: Structural repairs and refurbishment in room C3 and C6 above; wall-paintings discovered in C3; fireplace problems in C6.

1997: Coat of Arms in Old Court re-painted (incorrectly, in the case of the Hungary quarter).

2004: Weathervane on dinner bell tower over Old Hall broke away and fell to ground: repaired.

2009–10: Significant structural repairs to room C4 and C5 above, and support for fireplace of C5. Rotted major cross-beam repaired.