The Breakfast Room in the President’s Lodge is a room on the first floor of the riverside building, south of the wooden bridge. 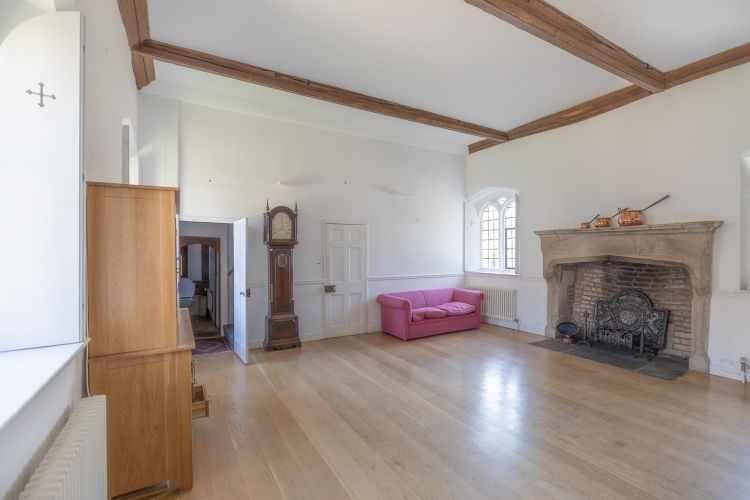 In former centuries, this room was referred to as the “Servants’ Hall”, suggesting that it was the room where the President’s servants had their meals and rest-breaks.

The fact that the far (south) wall does not have an original beam above indicates that it is a later insertion. A staircase rising to the attics above has been inserted (the first riser and handrail of this staircase are just visible through the door on the left), and the southern end of the room shifted in towards the camera, some time between 1777 and 1886.

The centre door leads to a tiny lobby under the staircase, leading to a door to the Cloister Staircase, which marks the southern limit of the President’s Lodge in the riverside building.

This room is now part of a private kitchen-dining room for the President’s family. 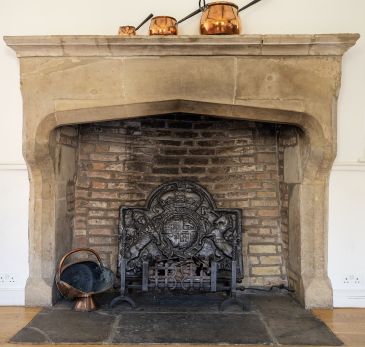 A close-up of the fireplace.

Around 1734, the linen-fold panelling of 1531-2, which had been removed from the Hall, was re-mounted around this room, along with its carved panels of grotesque heads and coats-of-arms. In 1777, the antiquary William Cole recorded all the coats-of-arms that he could see in that panelling in this room. In 1886, Willis and Clark repeated that exercise [1886 Vol. 2, p. 67], but were unable to find all the coats-of-arms that Cole had recorded a century earlier: they were apparently unaware that a staircase had been inserted behind the south wall of the room, and the room consequently made smaller, resulting in the loss of wall space for panelling. Around 1897, the linen-fold panelling was taken down from this room and transferred to the President’s Study, where it was assembled in a different order. When the Royal Commission on Historical Monuments catalogued the panelling in the President’s Study for their 1959 volume on Cambridge, they found 3 more coats-of-arms than Willis & Clark had listed, but not all the examples missing from the Cole survey.

In 1983, a false ceiling was taken down from the little lobby behind the middle door in the south wall, to reveal three carved panels (of which one was a coat-of-arms) that had been missing, presumably since the staircase was inserted and the layout of the room altered. These three panels seem to have retained their original colouring somewhat better than the main set in the President’s Study [1984 p. 9].

In 1996, there were major repairs to the Breakfast Room and the attics above [1997 p. 9]. The rather slender tie-beams visible in the ceiling in the photograph at the head of this page were found not to be strong enough to hold the weight of the attic floors above, and were strengthened with steel plates on their undersides. It was discovered that the attic floor joists were not properly jointed into these tie-beams, leading to the conclusion that the attics were not original, and that perhaps all the riverside building first floor rooms had originally been open to the roof rafters above. The attics might have been created in 1560, when there are entries in the college accounts for “constructing the master’s upper chambers” (which Willis & Clark misinterpreted [1886 v. 2 p. 34] as a reference to the upper floor of the Long Gallery, thereby dating it too early). After the repair of the attic floors and the tie-beams, the Breakfast Room was restored with a ceiling which left the tie-beams exposed to view.