The Queens’ sundial, over the library passage in Old Court, has long been thought to be a rare (perhaps unique) example of a sundial with a well developed set of astronomical measuring facilities and astrological symbols. Now we have recently become aware of another sundial which used to exist in Copenhagen, which was remarkably similar in design: so similar that a natural question arises as to whether one influenced the other, or whether they are both descended from some common ancestor. 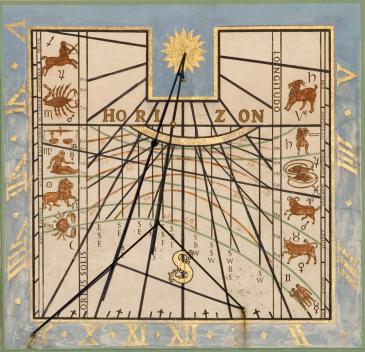 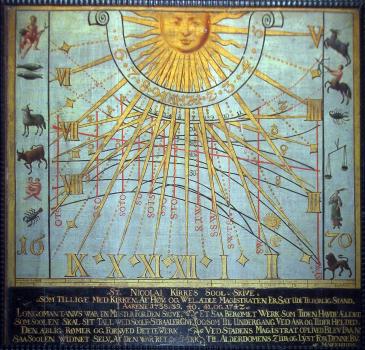 To discuss the sundials, some terminology needs to be explained. Most sundials are equipped with a gnomon (a rod or straight-edge which is parallel to the earth’s axis) whose shadow indicates time by the sun. Some sundials are equipped also with a nodus (often a ball or a disc) whose shadow indicates a particular point on the dial. The position of the shadow of the nodus can indicate numerous observables other than time, by reference to sets of lines drawn on the dial. On the Queens’ dial, the gnomon is a rod which has a ball nodus mounted on it. An important set of curves on the dial are those of constant declination, where the shadow of the nodus indicates the season of the year. Special cases of these curves are: the winter solstice (the highest curve), the summer solstice (the lowest), and the equinoxes (the straight sloping line in the middle). The intermediate constant-declination curves sub-divide the year into the signs of the zodiac. On any particular date, the shadow of the nodus traces the line of constant declination appropriate to that date. 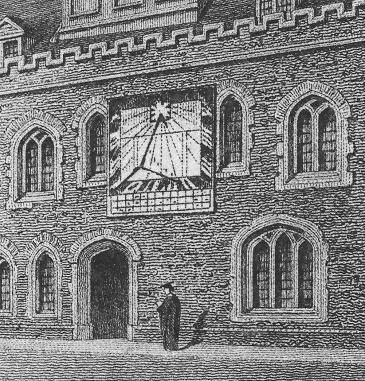 We know for certain that the Queens’ sundial was erected in its current position in May–July 1642. We do not know whether the current painted design dates from that time, or whether it was a later ornamentation. The earliest graphical representation of the sundial design is in a print of Old Court by J. & H.S. Storer, apparently published in 1829, where the design is clearly the same as today. In or not long after 1733 the antiquary William Cole noted: “... on ye Wall of ye Chapel and over ye Door wch leads to it is also lately painted a very elegant Sun Dial with all ye signs. This is no small ornamt to ye Court to enliven it.” The phrase “all ye signs” suggests that the current design was in existence in Cole’s time, but his account does not indicate whether the design was a new one then, or whether it was a re-painting of an earlier, perhaps original, design. The similarity of the two dials, and the likely date of the Copenhagen dial discussed below, lends strength to the notion that the present Queens’ design could date as far back as its construction in 1642, as we can at least say that designs of that sort were not unknown at that period. 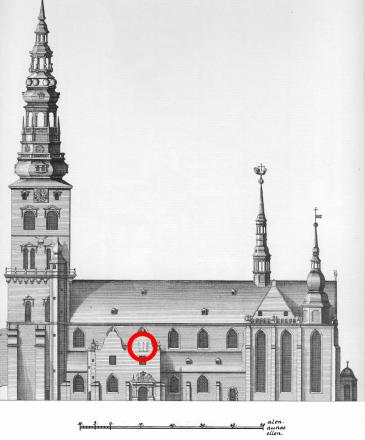 The Copenhagen sundial no longer exists, but a painted scale model of the dial survives in the Copenhagen City Museum. The original was high on a gable of the south porch of the church of St Nicolas (Nicolai Kirke). The date of 1670 visible on the Nicolai dial is not its date of construction, but is believed to refer to the date it was restored by Ole Rømer (1644–1710), the first astronomer to note that light appeared to take time to travel, rather than appearing instantaneously. The original dial design is attributed to Christen Sørensen Longomontanus (1562–1647), a pupil of Tycho Brahe, who became professor of mathematics in the University of Copenhagen in 1607. The date of construction of the dial is unknown, but the attribution to Longomontanus places it in the period 1607–1647. Given the great age of Longomontanus, and the need for its renewal by 1670, the date was probably earlier in that period rather than later, and thus it probably pre-dates the Queens’ dial. The painted scale model is signed “C.P. GETREUER PINX” (Christian Peter Getreuer, 1710­–1780, master painter and royal gilder), and it was probably made around 1742, when the real dial was already at least a century old. The dial, along with most of the church, was destroyed in the Copenhagen fire of 1795, and survives only in the form of the scale model in the museum.

By coincidence, the orientations of the walls on which the Queens’ and the Nicolai dials were painted are almost the same, so the layout of the lines on the face of the dial are similar, apart from the difference in latitude. The points of similarity between the dials are:

A feature of the Queens’ dial not appearing on the Nicolai dial is the prominent horizontal line labelled HORIZON, which can be considered to be a member of the set of altitude lines, representing an altitude of zero degrees. It also serves to indicate the correct height for the nodus, whenever it needs to be re-mounted. Other features found only on the Queens’ dial include (a) the table of lengths of daylight, (b) the table of sunrise times, and (c) the month names.

The Nicolai dial has some interesting features of its own. The symbols for the planets seem to have an earlier form than the symbols now commonly used. In particular, the symbol for Jupiter, normally ♃ in modern usage, appears as

(a greek capital letter Zeta ‘Ζ’ with a stroke through the base), an abbreviation for Ζεύς (Zeus), the Greek name for Jupiter. The French classical scholar Claude de Saumaise (1588–1653) suggested that all the planetary symbols were derived from contractions in Greek script of the Greek names for the planets.[Plinianæ exercitationes, by Claude de Saumaise, Vol. 2, p. 874] One can see that this

On the Nicolai dial, the sign for Cancer is a crayfish, whereas on the Queens’ dial it is a crab. Historically, there are examples of both having been used as representations of the Cancer sign of the zodiac.

On the Nicolai dial, the sun is surrounded by a scroll bearing the hour numbers in arabic numerals. No such scroll exists on the Queens’ dial.

Below the painted model Nicolai dial is drawn a scale ruler, showing that the width of the real dial was 14 quarter (kvarter), or 7 Danish feet of that period (the Queens’ dial is 8 feet wide). This is in agreement with the architectural elevation and scale shown above, where the dial appears to have a width of 3½ alen, or 14 quarter alen. The scale ruler on the model enables one to estimate that the painted model is at roughly one-quarter scale. Below the scale ruler is recorded, in 18th century Danish, a short history and a poem (by Morten Seehuus 1697–1744), which are the sources of most of the information we have about the dial:

which can be roughly translated as:

St Nicholas Church’s Sundial
Which together with the Church was put into proper Condition by the noble and gentle Council
in the years 1738, 39, 40, 41, and 1742.

Longomontanus was Master of this Dial,
To which the sun shall give its tally with sun-beams.
The honest Rømer, too, renewed this work,
So that the sun itself witnessed it was right and strong.
A work so famous, which Time has aged,
And which by Time and Tide declined towards ruin,
By the City Council became enlivened anew
Into antiquity’s adornment and delight for this town.

The similarity between the Nicolai and Queens’ dials was first noted by the Danish astronomer Axel V. Nielsen (1902–1970) in an article Soluret — den sollyse dags tidsmåler, pp. 16–52 in the 1953 yearbook of Den Gamle By, Købstadsmuseet. Nielsen was the author of a book on Ole Rømer and worked at the Ole Rømer museum at Aarhus.

No trace of any connection between Queens’ College and Copenhagen has yet been found that might explain the existence of two such similar sundials of similar ages.

I am grateful for assistance in compiling this article from Frank King (Cambridge) and Claus Jensen (Denmark). The photo of the Nicolai dial is reproduced by permission of the Copenhagen City Museum. This article first appeared in The Record, 2008, pp. 16–​18.

Further reading on the origin of planetary symbols