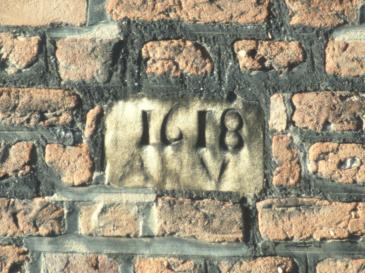 A small stone bearing the date 1618 is set into one of the chimneys facing Queens’ Lane (not 1617 as quoted in many histories).

At first, the building consisted of two full storeys, plus a third half-storey attic, and small garrets above, under a steeply pitched roof. It was this heavy roof (carrying the weight of the garrets) that was later to lead to severe structural problems.

1685: This detail from the Loggan view shows the original aspect of the building, from the Queens’ Lane side.

[1625: Many authors assert, probably incorrectly, that there once was a sundial on the building. All these claims derive from an entry in the accounts of June 1625 For the stoneworke over the Dyall in the new court xs [quoted AHUC, Vol 2, p20]. However, the sundial was on the north wall of the court, not on the building, as can be seen in the Loggan view of 1685.]

1777: A fire damaged the building. The building might have been repaired 1778–82 [AHUC, Vol 2, p20], but there is no record of what the repairs were. Willis & Clark assume, without any evident authority, that it was during that period that the building was altered to be a conventional 3-storey building without garrets, but the references in the 1804 report below cast doubt on that assumption. All subsequent histories which copy from AHUC are also at fault.

1804: A report of a survey by Charles Humfrey (the younger) describes severe structural problems. [QC Archives box 101] Judging by the phrase a very heavy Roof, incumbered with the Weight of an additional and almost unnecessary Floor and Jeists, the original 1618 roof and garrets were still in position, and failing. There is no record of which of his remedial recommendations were adopted, certainly many of them were not, such that, merely twenty years later, it was possible for another survey to report similar problems. A postscript to the report reveals that his father Charles Humfrey (the elder) and James Essex (the younger) had designed a replacement building, which would have involved complete demolition of the existing building. It is possible that, at that period, the college could afford neither the full repairs nor the rebuilding. 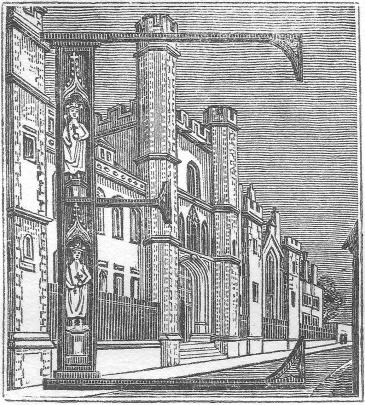 It is unclear from the historical record what the state of the roof and upper parts of the building were between the 1804 report and the 1823 works. Had the 1618 roof been removed and the building been converted to a conventional three storeys in works consequent upon the 1804 report, or did some of these changes not take place until 1823? Two pieces of evidence point towards the earlier date rather than the later: (a) the quotation by R. Woods for replacing the roof in 1823 was quite modest if the old 1618 roof needed to be removed at that date; and (b) a wood-cut by Gorham which must have been drawn by 1822 shows the street view of the Walnut-Tree Building having a pitched roof with no sign of garrets or dormer windows.

1822: The college agreed to further repairs of the Walnut-Tree Building:

Agreed & ordered that the necessary Repairs of the Lodge and of the Walnut Tree Court be done under the direction of Mr Woods.
[Conclusion Book, 1822 May 29]

1823: A report of a survey by R. Woods, the Clerk of Works of Downing College, describes weaknesses in the roof and walls of the building, and recommends erecting embattled parapets and replacing the roof with a lighter weight one in soft wood. [QC Archives box 101] The college accepted those recommendations: [AHUC, Vol 2, p20]

Agreed that a new Roof be placed on the Building in the Walnut Tree Court, the walls repaired and an embattled paprapet be raised on each side under the direction of Mr Woods.
[Conclusion Book, 1823 Jan 17]

The parapets still survive, unlike all the parapets added to other Queens’ buildings in the early 19th century. 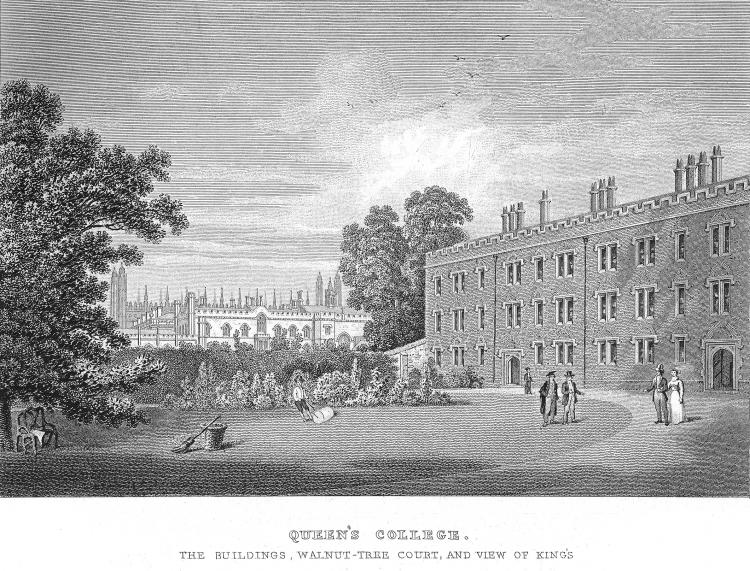 1827–29: View looking north-east drawn and engraved by James Storer and Henry Sargant Storer. Published in Illustrations of the University of Cambridge (first series) in part form 1827–1829.

This print shows how, before Queens’ built Friars Building and the new Chapel, there was a clear line of sight through to the buildings of King’s and their Chapel beyond.

The building is shown as it was before the arrival of gas lanterns outside the staircase entrances.

1842: On March 12th the Cambridge Chronicle reported: During the hurricane that raged on Wednesday night and Thursday morning the fine old walnut tree in Walnut Tree Court, Queens' College, was blown down. The presumed replacement lasted until the 1930s. 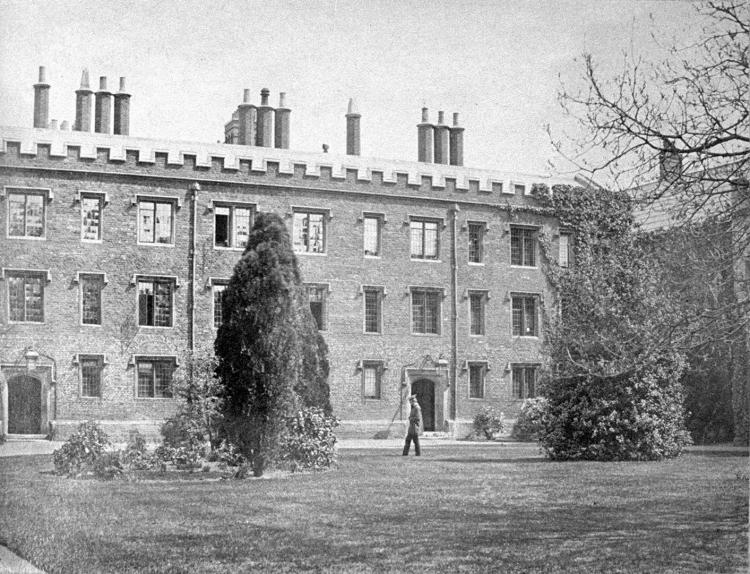 The gas lanterns are fed by conspicuous pipes at each entrance.

[The first few letters of Cade’s name can be seen on the lawn at the right margin.] 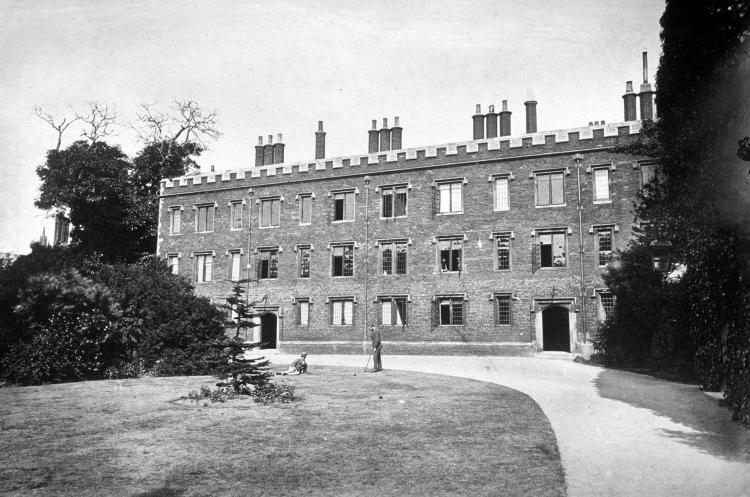 Before 1888: another old photo of Walnut-Tree Court, included for social interest.

A game of croquet is in progress on the lawn, watched by two observers from the windows of G4. 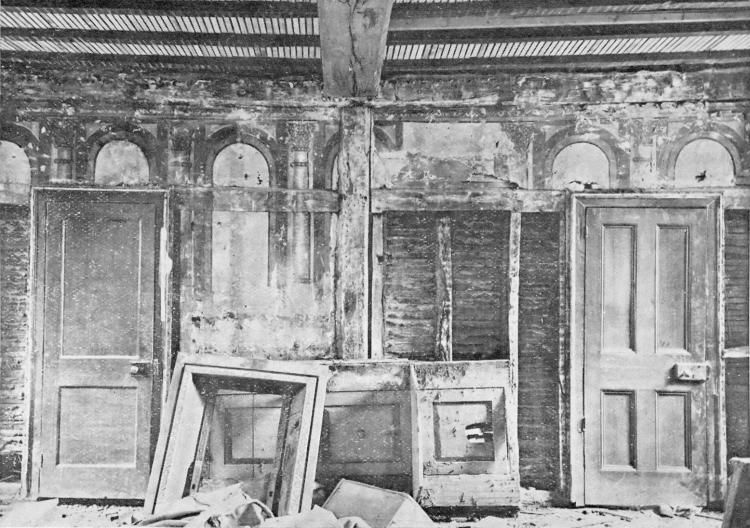 1909: The ground floor of the entire building was re-modelled and “restored”. The present solid floors replaced earlier timber floors. Wall coverings were stripped back, original fireplaces revealed, and some 17th-century painted plasterwork uncovered. The ceilings were altered to leave visible the beams and joists of the floor above.

The photograph shows new ceiling laths in position ready to receive plaster between the joists of the floor above. 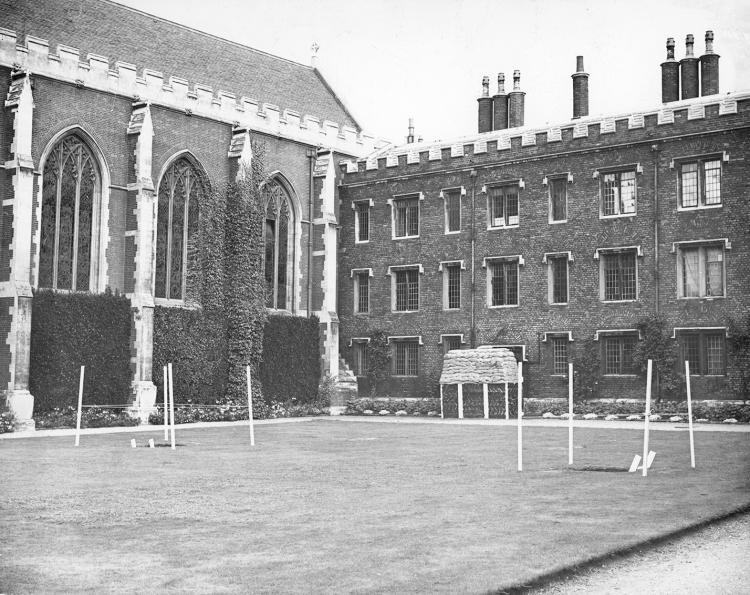 A photograph of Walnut Tree Court during the Second World War. In the lawn, the entrances to the underground air-raid shelter can be seen.

Staircase entrances were surrounded by sand-bag constructions to protect the entries to the building from bomb or shell blasts.

1804: Report, relative to the State and Condition of the Brick Building in the Walnut:Tree Court of Queens College, by Charles Humfrey the younger (1772–​1848).

1823: Report on the state of the old building in the back Court of Queens College, by R. Woods [Clerk of Works at Downing College]