The Essex Wing is part of the President’s Lodge. It is named for containing the Essex Chamber, where the arms of Robert Devereux, 2nd Earl of Essex, are prominently on display in stained glass.

Devereux was Chancellor of the University from 1598 until his execution in 1601. He is reputed to have stayed in this chamber. One of his ancestors was Anne, the sister of Elizabeth Woodville: the Woodville arms can be seen in one of the quarters of his arms.

[This use of the name Essex has no connection with the Essex Building, which is named after its builder, James Essex the younger.]

This photograph was taken probably in the 1870s. The Essex Chamber is the lower of the two semi-circular bay windows. The upper one is a bedroom.

Another photograph of the Essex Wing, of uncertain date, but certainly pre-1897.

This photograph is of higher resolution than the one above, and enables us to see that all the windows of the Essex Wing were double-glazed in this period: this was no longer the case after the 1911 alterations.

During this period, the President’s Study was in the Essex Chamber.

A drawing of the President’s Garden and the Essex Wing by Henri Toussaint in 1880. First published in Cambridge: Brief Historical and Descriptive Notes, by John Willis Clark, 1881.

Although today the Essex Wing is finished, both externally and internally, in a style very similar to that of the Long Gallery, it seems possible that the building itself is of earlier origins:

An examination of the lower part of this building shews that the west side rests on an ancient wall about two feet thick, built of large blocks of clunch. The north wall has been so much altered that its original construction cannot be ascertained. The east wall is now of red brick, but is as thick as the west wall. Is it not at least probable that we have in these walls the foundations of the original gallery, and that the three windows of stone made in 1537 were inserted in its north wall?
[AHUC, Willis & Clark, 1886, Vol. 2, pp. 35–​36]

In February 1537, the college purchased a wall from the Carmelite monastery (north of the college), and included in the agreement:

Moreover, whereas the President and Fellows of the aforesaid College have decided, and do now purpose, to make three or four windows, more or less, on the north side of a certain ambulatory called ly Galari, adjacent to the demesne of the aforesaid Carmelites; we the aforesaid Prior and Convent undertake on behalf of ourselves and our successors, that neither we nor they will build or erect, or suffer to be built or erected, any wall or building that may impede, obstruct, divert, or keep off the light from the aforesaid windows.

The document is dated 12 February, and on the 15th a payment occurs “for three windows of hewn stone in the master’s gallery, and for ironwork for the same;” and in March following the glazier is paid “for thirty feet of glass in the President’s new gallery,” and the carpenters “for six new window-frames.” …
[AHUC, Willis & Clark, 1886, Vol. 2, p. 33]

When looking for the location of a building which could have incorporated windows which might have been so close to Carmelite property as to need the protection of an agreement such as the above, then this Essex Wing, or its predecessor on the same foundations, is the prime candidate. The ground floor and foundations of this building are ancient, but not as old as the original buildings of 1448–​49. The building projects northwards from the President’s original lodgings in the older buildings, closer to the boundary of the Carmelite monastery than any other contemporary college building. It is therefore possible that this building, or its predecessor on the same foundations, contained the President’s Gallery, before the Long Gallery was built. There are references in the accounts to an earlier Gallery from 1510 onwards, at a time when the north cloisters still had a lead roof requiring repair. [AHUC, Willis & Clark, 1886, Vol. 2, pp. 30–​1]

A drawing of the President’s Garden and the Essex Wing, first published in the Architectural History of the University of Cambridge, by Willis & Clarke, 1886, Vol. 2, p. 21, but possibly drawn earlier.

The three-sided projection in the angle between the Essex Wing and the Long Gallery houses a staircase (known as the Kidman staircase) leading up from the garden to the Long Gallery. Above the staircase at second floor level is a bathroom. 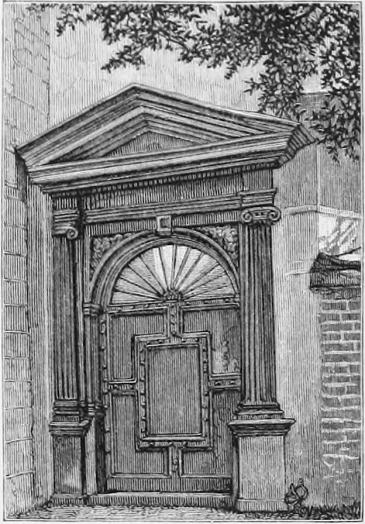 A drawing of the door to the garden at the bottom of the Kidman staircase, first published in the Architectural History of the University of Cambridge, by Willis & Clarke, 1886, Vol. 2, p. 24, but possibly drawn earlier. The door is in the style of the early 17th century [RCHM], and therefore possibly contemporary with the completion of the Long Gallery above.

An oral tradition in Queens’ recounts:

This staircase is sometimes called “Kidman’s staircase,” from a tradition that Richard Kidman, who robbed several colleges of their plate, for which he was sentenced to transportation for life in 1801, had intended to rob Queens’ College also. He entered the Lodge by this staircase, but it happened that the President, Dr Milner, was sitting up late in the gallery, reading. Kidman saw the reflexion of his lamp under the door, and did not venture to proceed. This story is given on the authority of the present President.[George Phillips]
[Architectural History of the University of Cambridge, by Willis & Clarke, 1886, Vol. 2, p. 22n]

This is the earliest appearance in print of this anecdote: other later accounts derive from this one. One has to be somewhat sceptical of the account: if one takes the story literally, then only the robber could have known about his aborted visit, but there is no reference to an attempted robbery at Queens’ in any contemporary account of Kidman, or in his confession. If people at Queens’ had later found evidence of entry into the staircase, how could they have known it had been Kidman? Maybe there had been more to this story than was preserved in this extract.

The pre-1911 photograph was by J. Palmer-Clarke. 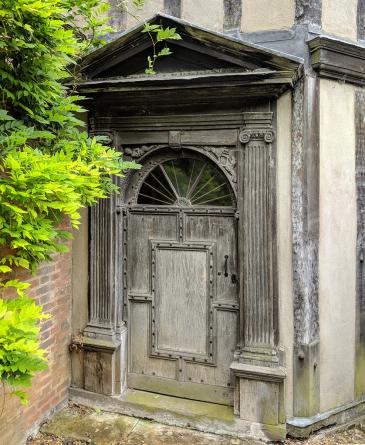 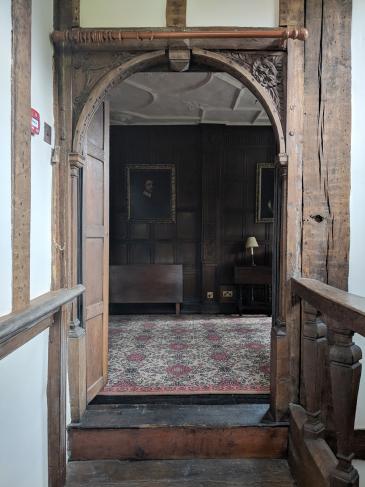 Left: The garden door to the Kidman staircase as it is today.

Right: The top door from the garden staircase into the Long Gallery. The frame shares some design features with the frame of the bottom door, suggesting that they are of a similar period.

A large iron hinge-pin beside the light switch suggests that there was once a door hung on this side of the frame.

This doorway appears to pre-date the panelling of the Long Gallery.

A photograph of the western elevation of the Essex Wing, as seen from Walnut Tree Court, showing the red-brick ground floor supporting the timber-framed structure above.

On the ground floor, the square window behind the lamp-post, and the door to the right of it, are modern alterations dating from the 1960s, at about the same date as the Senior Combination Room was extended into the Munro Room. The internal spaces were re-fitted as a Butler’s Pantry, Silver Wash-up, secure silver store, and staff W.C., with a new staircase down to the cellar below.

After the move to the new Dining Hall and kitchens in 1979, those rooms fell into disuse (apart from the cellar below). Some time later, it was re-purposed as a JCR Office and storage area. In 2003, the W.C. was converted into a wheelchair-accessible W.C. for use by visitors to the Old Hall, Munro Room, Chapel, and other nearby places.