The Munro Room is a general purpose room on the ground floor under the Old Library in Old Court.

Originally, this area comprised residential sets D1 and D2, entered from Old Court by a doorway opposite staircase C. From Lent Term 1838, room D2 ceased producing rental income and was listed as Lecture Room. From Michaelmas Term 1839, room D1 changed likewise. From Michaelmas Term 1845, both D1 and D2 became re-assigned to the Library (which at that time consisted just of the original library above, now known as the Old Library).[Account of Rooms 1815–​46, QC Archives bundle 256] At some stage, internal partitions were stripped out, and the ceiling beams (carrying the weight of the library book-cases above) were supported by two rows of iron pillars down the room. Around 1845(?), the library extension building of 1805 was rebuilt internally, creating a staircase connecting the library above with the new room below, and a new door was cut through between that staircase and this room, in the north-east corner. Fireplaces formerly in the 1805 building, on the west wall, were blocked by the staircase. At some stage, the fireplaces of the former rooms D1 and D2, on the northern wall, were blocked up. Two of the three chimney stacks involved were removed (see prints of the 1805 building). At some stage, the former entry door from Old Court was blocked up, so that the only entry was from the Library staircase. This room became known as the Lower Library. A plan of the room in this condition can be seen in the 1959 Plan from the RCHM Survey.

By the early 1960s the size of the Fellowship had grown to the point where the Combination Room had become too small for the Fellowship to take breakfast and lunch there, and too small for Governing Body meetings. Around 1963/64, the SCR therefore expanded, by cutting through a new door from the Combination Room into the north-west corner of the Lower Library.[Queens’ College 1962–​63, p.  4] The pillars supporting the ceiling beams were removed, and the beams themselves strengthened to take the weight above: the two eastern oak beams were replaced by steel joists in timber casing, and the two western oak beams were reinforced by a steel plate screwed to their undersides.[Queens’ College 1961–​62, p. 5] The walls were painted plain white, with bright orange curtains. It was named the Munro Room in memory of Andrew Munro, Fellow 1893–​1935, who left a bequest to the college that funds the Munro Studentships for research students.[Queens’ College 1964–​65, p. 4] The room was used for daily service of breakfast and lunch, and for Governing Body meetings.

The move of the SCR to Cripps Court in 1989 removed the need for the Munro Room being a breakfast and lunch room for the Fellowship, and the room became more generally available for dinners, receptions, and meetings. It is still the preferred location for Governing Body meetings. 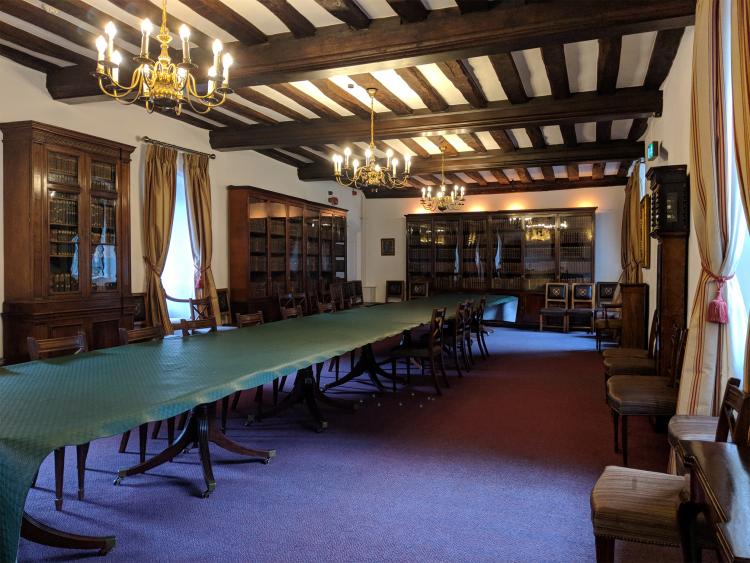 A view of the Munro Room looking towards the north-east. In the far corner is the door created around 1840 leading to the Library staircase, when this room became the Lower Library. The closest ceiling beam is one that has been reinforced with a steel plate screwed to its underside; the next two beams are modern steel joists clad in timber casing.

The table and chairs are mostly reproduction furniture dating from ca. 1964.

The bookcases at the far end and middle-left are in fact former traditional pharmacy display cabinets, rescued from a pharmacy in north-west London which was about to be re-fitted with modern shop furniture, and these cabinets were destined to be scrapped. A couple of Fellows hired a van and brought them to Cambridge, just in time. 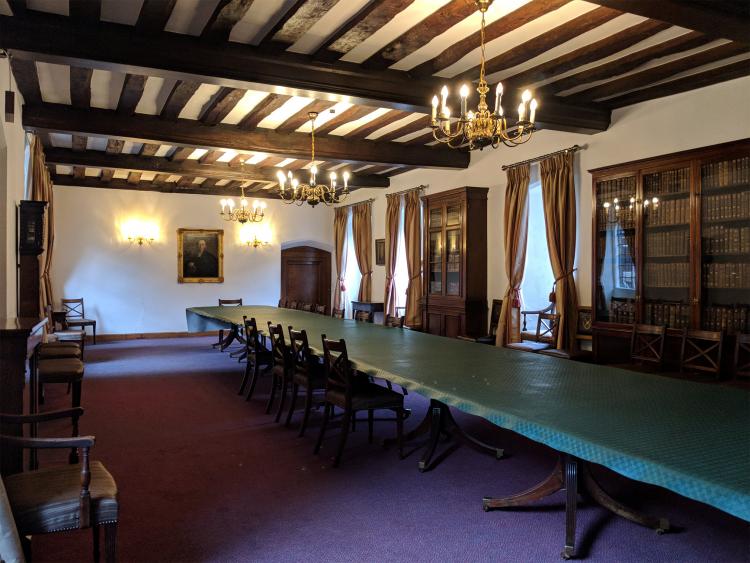 A view looking north-west, showing the doorway created from the Combination Room in 1963/4.