Queens’ College has two bells, both from the 17th century, and both mounted in Old Court. 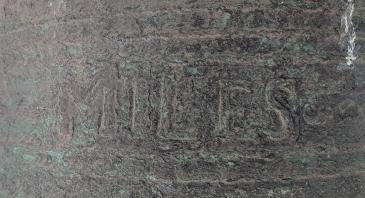 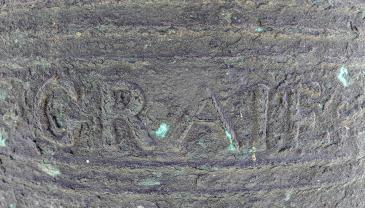 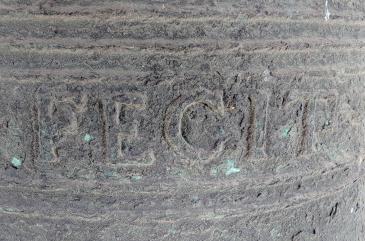 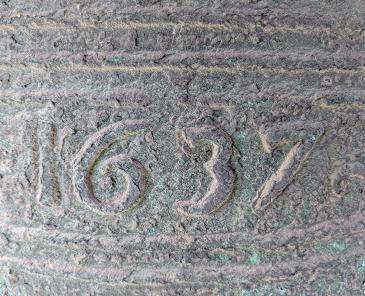 The Chapel Bell also serves as an hour bell for the tower clock. It is inscribed:

It was originally housed in the chapel bell-tower, which became unsafe and was demolished in 1804. The bell was then moved to a new clock and cupola on the roof of the Library. That was replaced in 1848 by the infamous, over-sized, clock tower designed by Brandon, which itself was replaced in 1910 by the present clock and bell cupola, designed by Cecil Greenwood Hare, as part of the Old Court roof works which also involved removal of the 19th century battlements.

There were three generations of bell-founders named Miles Graye, or Gray, originally based in Colchester. There is no documentary evidence as to which one made this bell, but 1637 lies within the period that the second Miles Graye was working in Saffron Walden.

The bell has an external diameter at the lip of 29½″, a circumference just below the inscription band of 53″, and a height (excluding bracket) of roughly 25″. 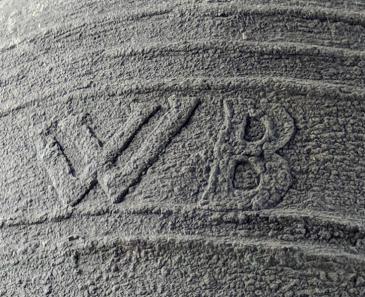 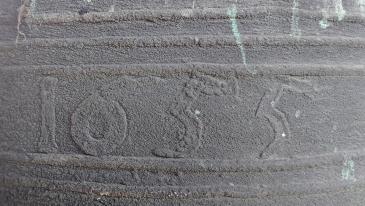 The Hall Bell, or Dinner Bell, is housed in a cupola directly above the Screens Passage, by the Old Hall. It is inscribed:

Nothing has been discovered about the meaning of WB. A cupola over the Old Hall can be seen in prints of college dating as far back as the 1592 Cantebrigia, by John Hamond (see Old Views and Plans). In Loggan’s view of 1685, the cupola is hexagonal, and that design appears to survive into the 19th century, where it can be seen in various prints. It was replaced in 1846 by the current bell-tower, designed by Dawkes, as part of a restoration of the Hall.

The Hall Bell was rung by kitchen staff about five minutes before dinner was served, to call the students to dinner. It has not been used in that way since the end of 1978, when the Old Kitchens closed and daily meal service moved to the current dining hall in Cripps Court at the beginning of the Lent Term 1979.

The bell has an external diameter at the lip of 17½″, a circumference just below the inscription band of 32″, and a height (excluding bracket) of 15″.

This bell has no clapper: it is struck by a hammer from the outside.