What we now call Cloister Court comprises buildings of many periods, including the earliest extensions of the original college (now Old Court). 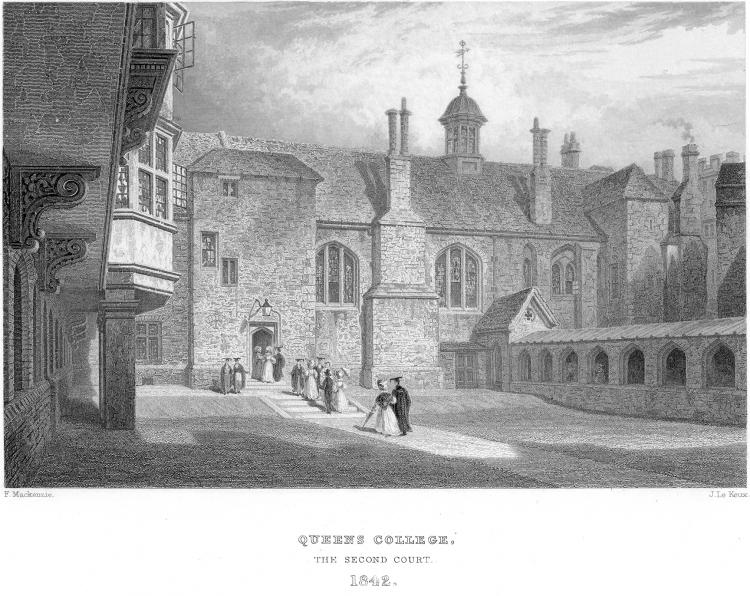 The oldest building in Cloister Court, on the east side, is the west range of Old Court, comprising (from left to right) the SCR, the projecting staircase to the President’s Study, the Hall, Kitchens, staircase I, and Erasmus’s Tower, all built around 1449 (the SCR and President’s Study maybe slightly later).

This view shows the state of the Hall before the changes of 1846 by Dawkes. The Hall windows have plain mullions, with no tracery and very little stained glass. There is no louvre on the roof (an inappropriate 1846 insertion by Dawkes), and the cupola for the dinner bell is seen in its pre-Dawkes design. Internally, the Hall has a flat ceiling, with attic rooms above, having dormer windows looking into Old Court: an unanswered question is by what means those rooms were accessed.

Some windows on the first floor of staircase I are strangely truncated in height, as if there is a lowered ceiling, or a mezzanine floor level, inside. They did not look like this in the 1726 view of Pump Court.

The ornamental brick chimneys on the stacks above the Hall and the Kitchens bear the date 1836. 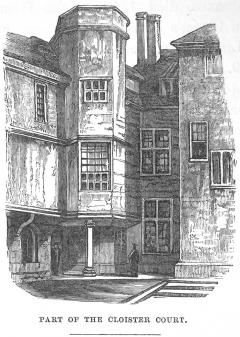 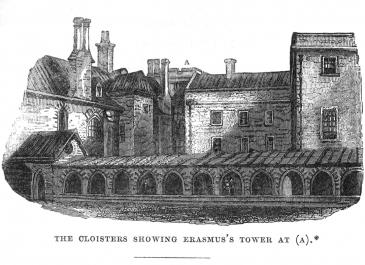 Two small woodcuts of Cloister Court first published in the same volume as the print above, ca. 1837–​42.

Left: looking to the north-east corner.

Right: looking to the north-west corner. 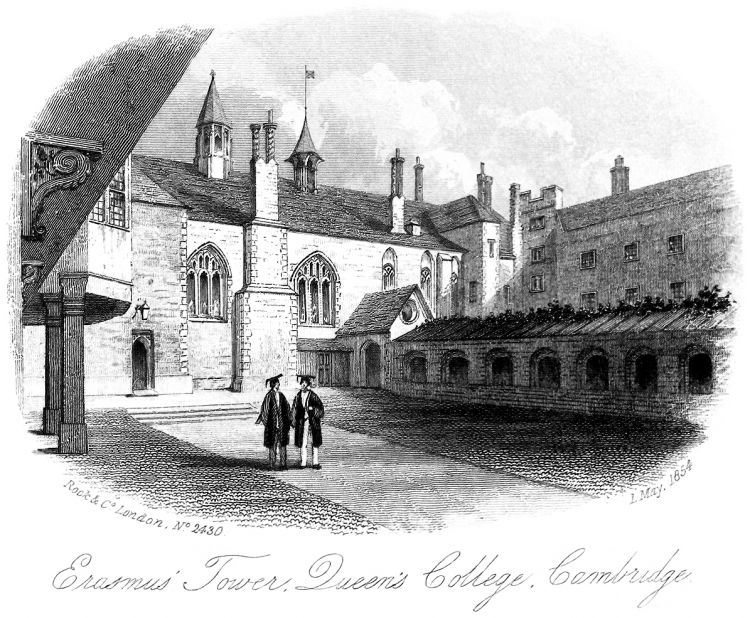 This view of Cloister Court is by Rock & Co, No 2430, dated 1 May 1854, titled Erasmus’ Tower, Queens’ College Cambridge, first published in The Tourist’s Souvenir of Cambridge, 1855.

The louvre inserted by Dawkes in 1846 can be seen on the roof of the Hall.

In Browne & Seltman, plate 48, this print is mis-credited to L. May, the authors having mistaken the date for a name. 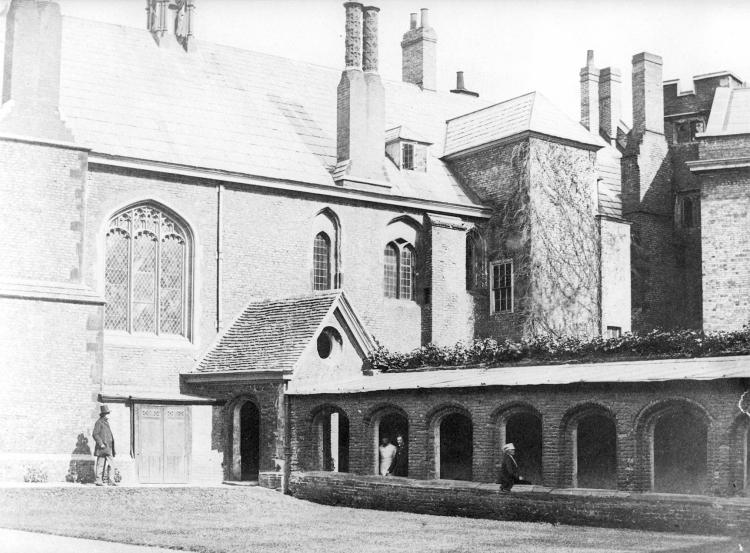 This photograph is thought to have been taken by Robert Cade in 1857: it occurs in an album where other photos of similar appearance bear his signature, or part of it. Robert Cade, of Ipswich, is known to have visited Cambridge in 1857, and his Cambridge photographs began appearing at exhibitions in 1858.

This view shows one of the side windows of the Hall in an intermediate state in which they existed for only a short period. The tracery added by Dawkes in 1846 can be seen: this tracery would last only until 1857/58.

The cupola for the dinner bell can be seen as re-designed by Dawkes.

The strangely truncated windows of staircase I can still be seen.

The doors visible under the window lead to steps down to cellars under the Hall. 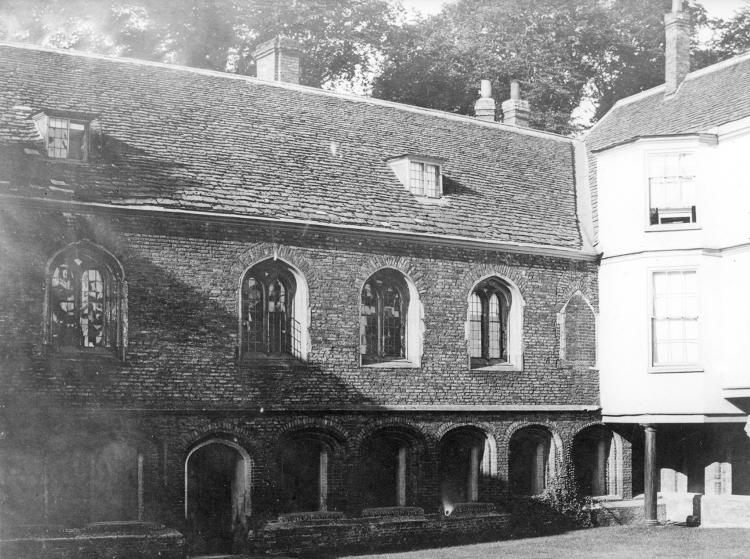 Another photograph by Robert Cade in 1857, of the riverside building on the western side of Cloister Court. The central archway leads to the Mathematical Bridge. This building is the oldest standing on the River Cam, and the second oldest in College, after Old Court.

This building is discussed further in a separate page.

Note that the cloister arches on the ground floor of this building (except the central arch) are of three chamfered orders, whereas the arches of the side cloisters are simpler, of two chamfered orders. 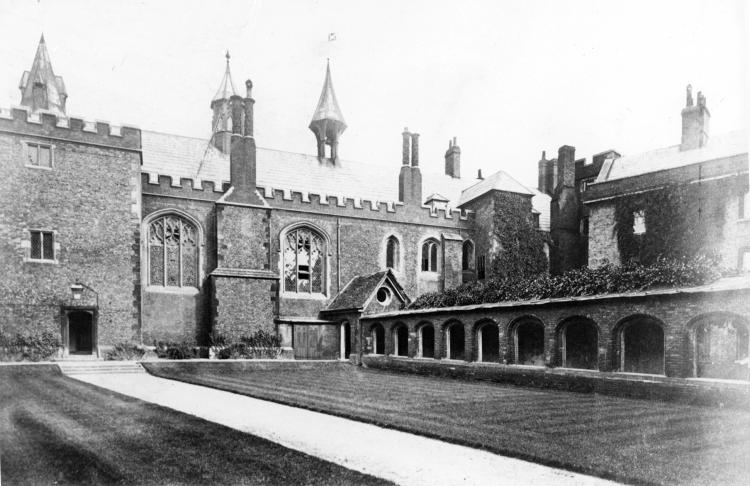 A photograph of Cloister Court some short time after 1859.

Much has changed since the 1857 photograph above: in 1857/58 the side windows were heightened and new tracery installed to the design of John Johnson, architect. Then in 1858/59 new stained glass by Hardman of Birmingham was installed in the north (left) window, but not in the south (right) window, which retained its clear glass in this photo, and must have had stained glass installed slightly later. The truncated-height windows on staircase I have been restored to full height, and the sills raised by about three courses of bricks. Battlements have been added along the entire eastern elevation. 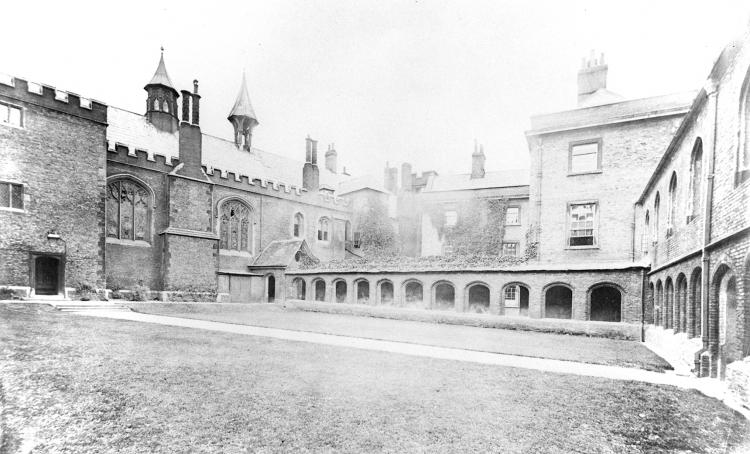 A wide-angle photograph of Cloister Court, probably taken in the 1860s. The stained glass of the south (right) side window of Hall looks very new and regular, whereas the glass in the north (left) window has already warped slightly with age.

The next buildings to arrive in Cloister Court after the riverside building (extreme right) were the north and south cloister walks: the complete south cloister can be seen here. The cloister walks were built definitely later than the riverside building, as can be seen by inspecting the fabric where they meet. Willis & Clark, on the basis of circumstantial evidence, suggest a date of around 1494/5.[AHUC, Willis & Clark, Vol. 2, pp. 14–​15] 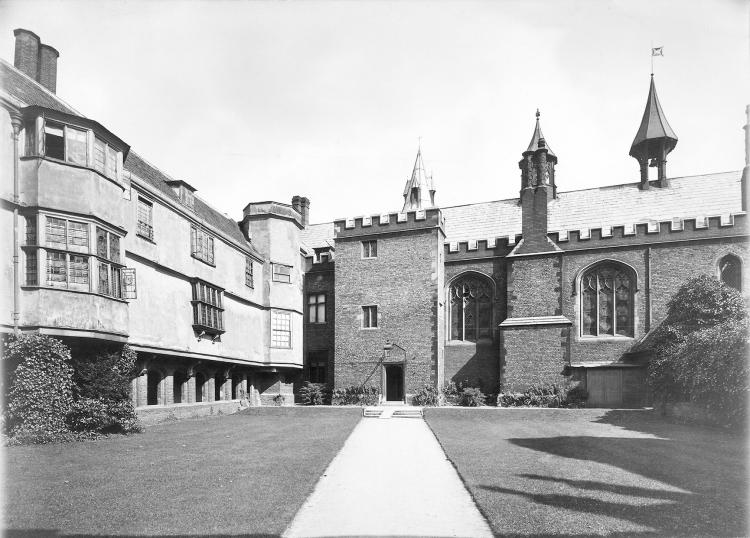 A parallax-corrected photograph of Cloister Court, thought to date from 1891.

The Long Gallery, seen here on the left, was built on top of the northern cloister walkway at some point in the 16th century. It is discussed further in a separate page. 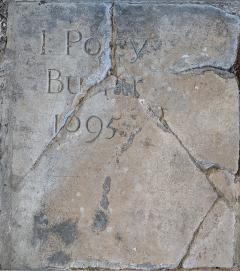 A paving stone at the east end of the north cloister has the inscription:

John Poley was a Fellow 1676–​1718, and was Bursar in 1695. Presumably this inscription dates the laying of the paving. It cannot have been a gravestone, as sometimes fancifully supposed, because (a) this was not consecrated ground; and (b) Poley lived until 1718. 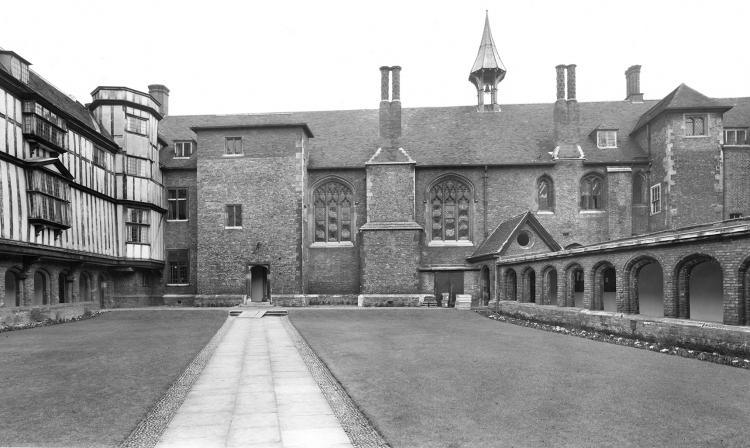 A photograph of Cloister Court in 1959.

The battlements were removed in 1909 when the Hall roof was repaired.[The Dial, Mich. 1909] It appears that the top of the staircase to the President’s Study was rebuilt at the same time.

The external appearance of the Long Gallery changed in 1911.