The Muniment Room, or Treasury, was the room in which the college kept its valuables, charters, and legal records, from its foundation onwards, for over 500 years. 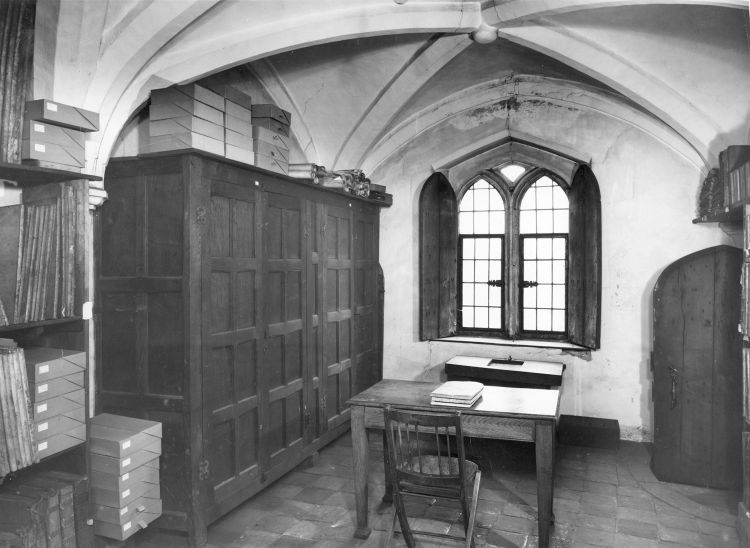 The Muniment Room, called the Treasury in earlier times, occupied the entire first floor of the gate-tower in Old Court, immediately above the entry archway. It could be reached from the helical staircase ‘F’ built into the north-west turret of the gate-tower. A short branch staircase led up to the door to the Muniment Room: originally that branch staircase had lockable doors at both top and bottom, but now only the top door survives. As a location, the Muniment Room was above flood level. All four walls were made of stone or brick, and thus relatively resistant to fire spreading from adjacent rooms. In terms of the building risks known at that time, the Muniment Room was the safest location in college.

In this 1948 view, looking westward towards the window overlooking Old Court from the gate-tower, the entry-door into the room from the branch staircase can be seen on the right. The archives of the college can be seen either on open shelves, or in drawers inside cupboards (or “presses”). 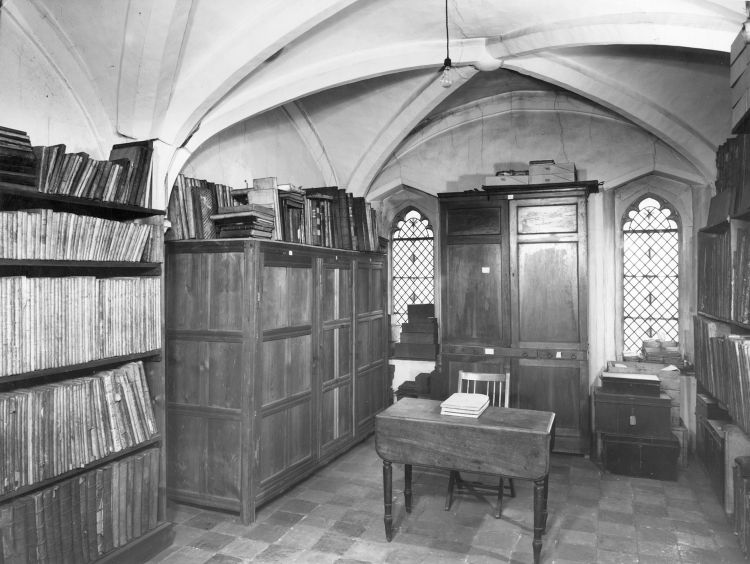 This view looks eastward towards the windows overlooking Queens’ Lane.

The floor is made of coloured glazed tiles, which appear to be medieval. They show more signs of wear than might be expected from being the floor of a lightly-trafficked Muniment Room, so they might have been moved here from elsewhere.

In this room, there was originally an iron-bound padlocked chest for the greater valuables, but this chest was moved, first, to the ante-chapel of the Old Chapel around 1898, and then, secondly, to the Library.

One of the presses in this room was made in 1640 for the storage of costumes used during performances of academic drama. Alas, having been stored here, they were never used again, as academic drama came to an abrupt end during the puritan period, and never revived at Queens’.

The Queens’ College archives do not merely encompass the history of the college, they also contain documents of wider interest, and older. There are some 12th century documents, including one relating to St Botolph’s Church. Perhaps most importantly, there are account-rolls and manor court-rolls relating to various estates of Crowland Abbey (sometimes spelled Croyland) dating from around 1258 onwards. These appear to have been acquired by the college at the time of the purchase in 1560 of the Vicarage and Manor of Oakington, previously a Crowland property.

The first investigation into, and organisation of, the archives in the Muniment Room was undertaken by William George Searle, in preparation for his history of the college published in 1867. After sorting the unbound items, he sealed them up in 65 biscuit tins, of 7lb size. [1925b]

The second re-organisation and cataloguing of the archives was undertaken by the Revd John Foster Williams (1878–1971), former Scholar (1897–1900) of the college, and incumbent sequentially of two college livings: Sandon, Essex, 1926–35; and South Walsham, Norfolk, 1935–48. From 1913 onwards, he seems to have acted as volunteer part-time college archivist. The biscuit-tins were unsealed, and their contents re-sorted into box-files. He compiled hand-written catalogues of the archives, and published a few papers [1925a; 1930a; 1944] on the archives. The ordered state of the archives evident in the photographs above was largely his handiwork.

Around 1964/5 (details are hard to come by), the Muniment Room was destroyed. The presses and shelving were taken out and burnt. The room was converted into an undergraduate study-bedroom (F1). This arrangement appears to have been unpopular (perhaps the lack of a gyp-room and sanitation might have been an issue), and after a few years, the room became a Fellow’s study, as it remains today.

The archives from the former Muniment Room were transferred to a room that was reported [1967a] to be on the ground floor of the President’s Lodge: this room appears to have been either adjacent to, or in, the boiler-house, within the 1761 ground-floor extensions under the Long Gallery. In 1967, the College’s Keeper of the Records, apparently concerned about environmental conditions in that room, asked for an inspection and report from staff of the University Library. The report [1967a] recommended that the college archives should be transferred and stored with the University Archives in the University Library. After some discussion, the college agreed to the transfer, which took place in 1968. The Queens’ College archives still remain with the University Archives, where they now enjoy a better storage environment than anything that could have been provided in the original Muniment Room.