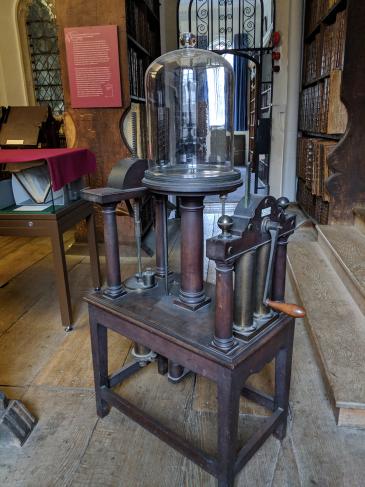 Queens’ College possesses an old air-pump, or vacuum pump, as we would say today.

On 1794 June 2nd, the Governing Body made the following order:

Agreed also that the remaining fragments of the Materia Medica, which are now of little or no Value be given to the Public Lecturers in the University or be otherwise disposed of according to the Master’s discretion, & that in lieu thereof be purchased an Air Pump & pneumatical apparatus to be kept in the Lodge except when The Tutors of the College wish to have the use of them for the purpose of instructing their Pupils in their public Lectures.
[Conclusion Book, 1794 June 2]

The Materia Medica collection in fact survived this decision, and remains in our possession.

Items in the College Accounts relevant to the purchase of Philosophical Apparatus:

We have no documentary proof that the air-pump currently in our possession is the one whose purchase was ordered in 1794, but it seems a very reasonable assumption. The maker’s label reads:

This air-pump was item 102 in the catalogue of the Loan Exhibition of Historic Scientific Apparatus held in the East Room of the Old Schools, 1936 June 8–​23, and item 101 in the subsequent book Early Science in Cambridge, where it was described as:

The Queens’ air-pump has two means of evacuating air from the glass bell. The dual-cylinder pump on the right of the photograph appears to be a conventional hand-operated pump, as can be seen in the painting An Experiment on a Bird in the Air Pump. The pump on the left of the photograph appears to be a Cuthbertson pump device, using a single oil-filled cylinder, under the table. One might speculate that, during an experiment, the dual-cylinder conventional pump was first used to rapidly achieve a modest vacuum, then the dual-cylinder pump was isolated from the bell by a stop-cock, then further and deeper evacuation achieved more slowly by the Cuthbertson pump.

The President of Queens’ 1778–​1820 was Isaac Milner, who, amongst other things, was a practising Natural Philosopher (scientist), and had earlier established an experimental laboratory in college. In one of his letters he admitted:

I have been a great dabbler in air-pumps, and have spent a great deal of money on them. I have now one by me, which cost 60l. and upwards, exclusive of the apparatus - and yet they are all defective, at least when compared and measured by my fancies.
[Letter to Mr Ludlam, 1791, quoted in The life of Isaac Milner, by Mary Milner, 1842, Vol. 1, p. 70]

Since that letter was dated 1791, it cannot refer to the air-pump of the College Order of June 1794: but it demonstrates Milner’s acquisitive tendencies for such devices. A sum of £60 in 1791 would have a value of over £8000 today.

It is difficult to accept the wording of the 1794 College Order at face value. If the Materia Medica referred to are those of Vigani’s Cabinet, then that collection could not truthfully have been described as fragmentary in 1794, as the collection today still fills the original cabinet, and in parts matches the descriptions of 1730 by Professor Richard Bradley.
[A course of lectures, upon the Materia Medica, Antient and Modern, by Richard Bradley, 1730]

Further, if the collection of Materia Medica were of little or no Value, then there could have been little or no benefit to the college in disposing of it, and thus little point in using the disposal as a justification for purchasing an air-pump. Since Vigani’s Cabinet survives today, it appears that no such disposal in fact occurred, although an air-pump was indeed purchased.

One might also wonder which college Tutors of 1794 would have been capable of usefully incorporating an air-pump experiment into their public lectures.

One is left with an uncomfortable suspicion that this Order might represent a means by which Isaac Milner could obtain scientific apparatus for himself at college expense.

1787: Description of an improved Air-Pump, and an account of some experiments made with it, by which its superiority above all other Air-Pumps is demonstrated, by John Cuthbertson. (OCLC 264952831)