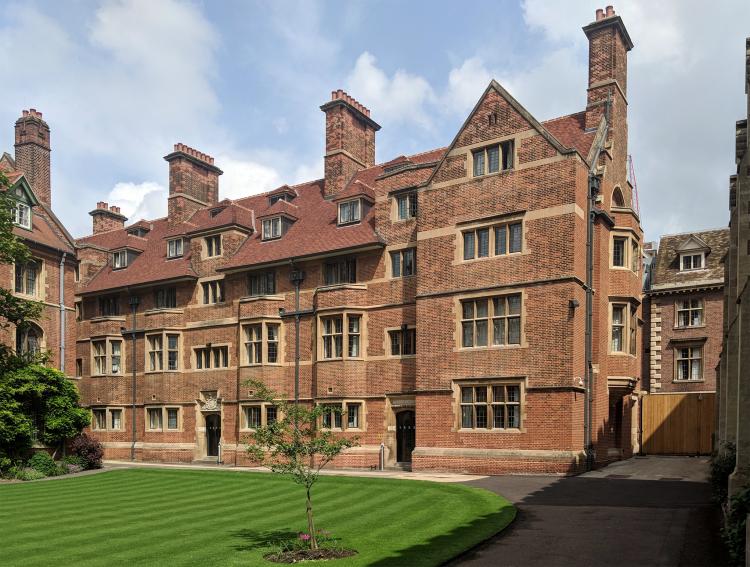 Dokett Building was built in 1911–12 and named after the first President of the college, Andrew Dokett.

The building was erected on the site of almshouses built in 1836 to replace Dokett’s original almshouses on Silver Street, on part of the site sold to St Catharine’s College that year.

The architect described his own building:

The Dokett Building stands on a site formerly occupied by the Dokett Almshouses, i.e. the N.E. corner of the ground acquired by the College from the Carmelites in 1544.
The buildings provide accommodation for 26 students together with Guest Rooms, Bursar’s apartments and College Offices, with bathrooms, lavatories, etc., in the basement.
The planning follows on traditional lines, with the students’ rooms opening off each side of the staircases, a service room being provided on each landing. The bedrooms, generally speaking, face on to Queens’ Lane, and the sitting-rooms on to the Quadrangle.
The building is of three storeys above the ground, roofed in one span with steeply pitched red-tiled roof, broken up by the dormer windows of the suites which are arranged in the roof.
The main building is flanked by projecting gable-ends with smaller central gable, that on Queens’ Lane containing a niche with the figure of Andrew Dokett. The elevations are carried out in thin red "Daneshill" brick with Corsham stone dressings and mullioned windows. The gables towards Queens’ Lane are emphasised by boldly projecting oriels to the first and second floors, carried on well-moulded corbels, and bay windows are provided to the ground and first floor sitting rooms on the Quadrangle side. The flues are contained in four great stacks in brick with stone cappings.
As the building of necessity had to be rather tall in proportion to its length, horizontal emphasis has been sought by inserting stone bands and moulded strings, which run continuously round the building at the sill and head level of the windows on each floor. Over the central entrance on the Quadrangle side is placed the College Coat of Arms, boldly carved in a shaped stone panel. The staircases are panelled in oak to dado height, and the doors, fireplaces, and all other woodwork are also carried out in the same material. The contractors were Messrs Rattee and Kett of Cambridge; the architect being Mr C.G. Hare of Messrs Bodley and Hare, London.
[The Queens’ College of St Margaret and St Bernard in the University of Cambridge, by Joseph Henry Gray, 2nd Edn 1926, Appendix E, pp. 279–​80] 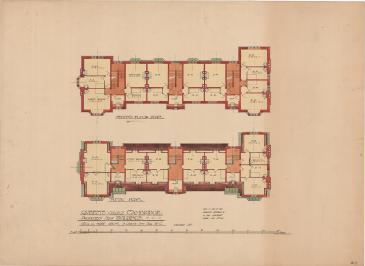 The contract drawings for Dokett Building, dated July 1911. These show the original internal layout of the building (with some scribbled later changes). 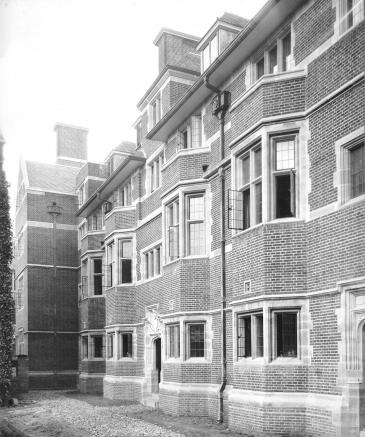 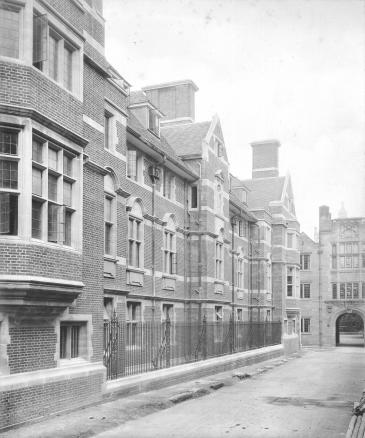 These photographs show Dokett Building as built in 1912.

The building contractors were Rattee & Kett. The internal oakwork was a benefaction of the President, Dr Thomas Cecil Fitzpatrick. There are three staircases (Q, R, S). 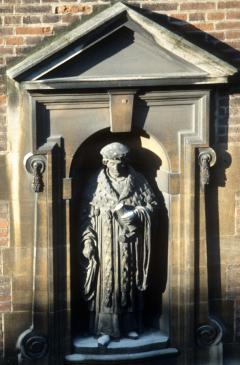 A rarely noticed feature is a full-height statue representing Andrew Dokett in the centre of the building facing Queens’ Lane.

Dokett Building was notable for two things: it was the first building in College (and surely one of the earliest in Cambridge) to have solid brick internal walls and floor slabs made of reinforced concrete (in other words, no structural wood until the roof trusses). But it also included much more radical innovations: the first bathrooms in College, with hot running water from a boiler, and the first building to be built with inside toilets (these innovations had been made possible by Queens’ becoming connected to the mains sewerage system in 1896–8). Alas, public taste was not ready for toilets and bathrooms on the staircases, and these shocking new facilities were consigned to the basement: for over a century, residents would have to descend up to four flights of stairs to reach any sanitation.

It is becoming increasingly difficult to provide room for extension of Cambridge colleges. At Queens’, the problem has been happily solved by the removal of a mean row of almshouses on the west side of the Lane. The charity was endowed by Andrew Dokett, the first President, and it is now to take the form of weekly pensions. Architecturally, the founder is commemorated in a much more impressive way than before in the new range, and his statue fills a niche on the east front. The whole scheme is a happy combination of reverence for the past with care for the present and future. The buildings were designed by Mr. Cecil G. Hare, and carried out by Messrs. Rattee & Kett: they provide accommodation for twenty-six men, and also include Bursary, guest room, clerk’s offices and bathrooms.
The style may be described as late Tudor, and as was frequently the case at that period, the material is red brick with stone mullioned windows and dressings. The bricks from Clare, in Suffolk, have a charming colour and texture: the stone is the well-known oolitic limestone from Clipsham, in Rutlandshire. The pointing of the joints is smeared to such an extent that the divisions between the bricks become more prominent than the bricks themselves. Whether this is advisable or not must be a matter of opinion. For our own part, we greatly prefer the absence of pointing at the School of Agriculture and the New Lecture Rooms, where the red brick walls are of great beauty. At Queens’ a band of stonework is sometimes continued from the windows. Here and there it appears naturally to bind the building together, but, where it stops dead in the middle of the bricks, as on the south wall, the effect is not very harmonious. The stone plates below the windows would have been better omitted, especially as the moulding at the top does not throw off the water, and they are beginning to be stained by black marks. The west front is very different from the east, and we do no like it quite so well. The three doorways have four-centred arches, moulded in late Perpendicular fashion. The carving in the spandrels and round the College Arms is quite excellent, and will bear comparison with good mediaeval work. The Arms might have been cut a little deeper. The lettering over the two side door-ways is not quite successful. We are glad to see so much oak used in the rooms and the staircases: it is not only better, but cheaper in the long run, than a softer wood. Altogether, the College has rendered a service to the University and town as well as to itself by such a worthy addition to its buildings.
[Recent Buildings in Cambridge: III. College Buildings (2), by D.H.S.C., in Cambridge Review, Vol. XXXIV, 1912–​13, p. 265]

The original design had two-room sets, with the sitting-room facing the court, and the bedroom facing Queens’ Lane. In 1991, most of the sets were converted into two study-bedrooms, with those facing onto Queens’ Lane being rather small. 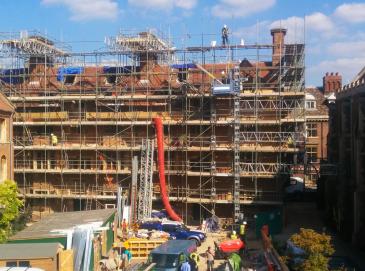 In 2014, Dokett Building was the subject of a major restoration. The brick had proved to be too soft, and had weathered badly, particularly on the chimney stacks: many thousands of bricks were replaced, and the exterior elevations of the building cleaned. Internally, WC-shower rooms were introduced on every landing, at the expense of reducing the size of the former court-facing sitting-rooms. Original oak shelving and fittings displaced by the shower unit were relocated elsewhere in the room. About half of the small rooms facing Queens’ Lane were enlarged by moving internal walls. The entire heating, electricity, water, drainage and fire-protection systems of the building were renewed, all the gyp-rooms were re-fitted, all the windows had secondary glazing fitted, automatic doors were fitted to the staircase entries, and forced supply and extract ventilation installed, with heat-exchangers in the attic space behind new dormers. The tiled roof was replaced, thermal insulation inserted, and lightning protection fitted. The rooms on all three staircases were re-numbered. 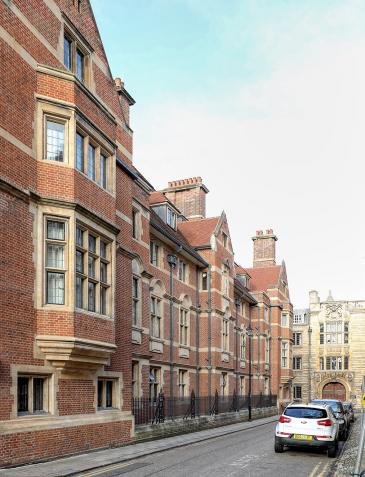 In 2019, railings were restored to the Queens’ Lane elevation of Dokett Building. The design was based on the original railings of 1912 (seen in the photgraph above), but at reduced height, to preserve sightlines from the ground floor study windows. The photograph shown to the right is a 2019 recreation of the 1912 view.