The five north-facing windows in the Old Library all contain stained glass, each including two roundels apparently depicting Carmelite monks. Shown here is one of the five windows.

The Carmelite order (otherwise known as White Friars) had a monastery between the original sites of Queens’ College and King’s College. On the Queens’ side, all of the land now north of the Walnut Tree (roughly) was part of the Carmelite monastery, and the college was limited to Old Court and Cloister Court.

In August 1538, as part of his dissolution of monasteries, King Henry VIII commissioned the Provost of King’s and the President of Queens’ to procure the surrender of the Carmelite monastery, and to send him an inventory of its contents. Within ten days the Carmelites had surrendered the monastery, and the inventory was duly sent to the King. By the end of September, Queens’ had started pulling the Carmelite buildings to pieces.

In 1544, a wall was built around a new President’s Garden in what had formerly been Carmelite land. The boundary wall between Queens’ and King’s was built in 1549, part of that wall having been the north wall of the church of the monastery.

Of these windows and their glass there is no record, but it is assumed that the glass was removed by Queens’ from the monastery buildings and set up again in the north-facing windows of the Library, which overlooked the former Carmelite site.

The original glass is thought to be late 15th century, which makes it the oldest surviving stained glass in college, with the exception of one piece in the Old Combination Room. 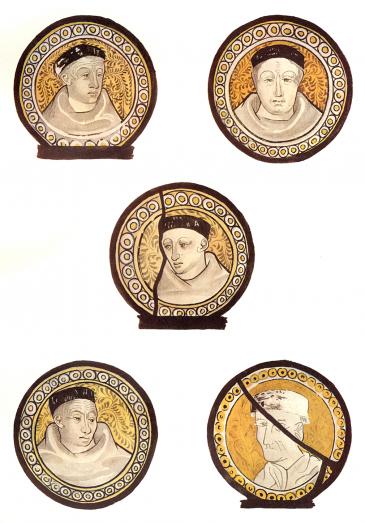 The roundels appear to contain depictions of individual members of the Carmelite order.

The stone window-frames are interesting in that they are the only windows of Old Court to retain their original clunch form, complete with cusps. Presumably it was the presence of the stained glass which made it unfeasible to scrape the cusps away when the remainder of the college was treated in that way. [College Orders 5 July 1774, 1 May 1775, 29 June 1782]