The 4th floor of Cripps Court was added in 2006–07, replacing the original flat roof. It comprises the Stephen Thomas Teaching and Research Centre and 18 student rooms.

The flat roof of Cripps Court had been problematic from the very beginning, back in the 1970s. It allowed rain-water to leak into the building in various places. The rain-water down pipes from the roof became sclerosed with mortar leached by rain from the roof to the extent that the smallest leaf could completely block them. The glass-houses at the top of each staircase were themselves leaky, and strong winds had a tendency to rip complete glass sheets out of their frames. Despite a complete replacement of the flat roof in 1985, the problems remained. We came to the conclusion that, eventually, we would have to replace the flat roof with a conventional pitched roof. But, if a pitched roof was to be built, why not put some useful accommodation underneath it at the same time? 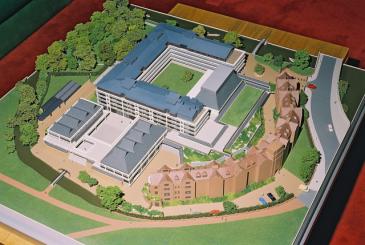 Thus, the proposal to add a fourth floor to Cripps Court began to be discussed in 2000, discussions with architects continued throughout 2001, planning permission was granted by the City Council in February 2002, and a photograph of a model of the proposed extension was published in The Record of 2002. Fundraising, through the Capital Campaign, began in November 2004. The building work took place in 2006–07, partly funded by a benefaction from Catherine Thomas, widow of alumnus Stephen G. Thomas (1971).

The following article, written after completion, first appeared in The Record 2008.

2007 saw the completion of a year-long contract to add a new storey to the existing Cripps Court building. The original building had been constructed with a flat roof with access from every staircase, so adding an extra storey would not, we thought, involve major surgery, and would be a valuable addition to the stock of accommodation on the college site, where development space is otherwise almost exhausted.

One of the greatest design challenges for such an extension is ensuring that the weight of the new storey does not exceed the capacity of the original foundations, which could not easily be reinforced. Investigation of the original designs from the early 1970s revealed that the safety margin designed into the foundations (concrete piles) was relatively small: certainly not enough for another floor in the same materials as the existing building. This led to three constraints: (i) the design had to be one using light-weight materials; (ii) as much weight as possible had to be removed from the existing structure before the new extension was added; and (iii) the load of the new storey had to be carried by the outer edges of the lower storeys, rather than the central structure. The outcome was a design with a steel frame and internal walls of dry-linings: there is almost no concrete or brick. The steel frame transfers the weight (even of the floor itself) to the edges of the building, with almost no load on the former roof slab itself. The former flat roof had been a heavy-weight construction, involving deep concrete screed, asphalt, and paving slabs. The roof had also carried many concrete plant-rooms. Removing all of this took many tons off the foundations, and made a sufficient saving of weight to accommodate the new light-weight storey within the safety margins of the original foundations. The new top floor is finished with a zinc roof, coloured to look like lead: lead itself would have been too heavy.

The work started immediately after the Easter Term 2006. During the demolition and construction phases of the contract, the entire court was surrounded by scaffolding on all sides,. The scaffolding supported a massive temporary rain-proof roof, resembling an enormous marquee. This had sliding sections which could open to permit a crane to drop in building supplies or take away demolition rubble, and close again to keep the weather out.

An early set-back to progress was the steel framework itself. The college had authorised prefabrication of these frames to speed up the construction, and so they had been built to dimensions read off the original construction drawings from the 1970s. When the old roof was eventually demolished, it revealed that the concrete frame of the building was an inch or two narrower than drawn, so many of the prefabricated frames were just a fraction too wide to fit, and they had to be returned to the factory for alteration. Thus all the gains we had hoped to make by pre-fabrication were lost, and the contract progress suffered an early setback from which it never really fully recovered. Apart from this, the progress was good. Once the new zinc roof was water-tight, the temporary roof and scaffolding could begin to come down: we had originally expected this to have happened during the Lent Term 2007, but in the event, the scaffolding came down during the Easter Term, while finishing works proceeded apace inside. At peak times, there were over 70 workers on the new floor.

At the same time as erecting the new storey, we refurbished the existing lift on AA staircase to extend it to the new floor, and make it accessible by wheel-chairs. We felt we needed a similar arrangement at the opposite end, FF. There had always been a lift from the ground-floor kitchens to the first floor, to service the Armitage Room dining area. This lift was also extended to the new 4th floor, which involved cutting a new lift shaft up through the 2nd and 3rd floors (where two student bedrooms had to be made smaller to make room for the lift shaft), and through the former roof slab. At the ground floor, a new entrance was cut into this lift shaft from the lobby of the Cripps Dining Hall. We now have two public lifts servicing all floors of Cripps Court.

The new floor was handed over to us in August 2007, so that we could install furniture and fittings. The floor was in full use for the start of the Michaelmas Term 2007. The accommodation consists of: 18 en-suite student rooms, with two associated kitchenettes, plus the Stephen Thomas Research Centre, which comprises 3 seminar rooms for teaching, and 17 studies for Fellows’ teaching and research.

Despite being of light-weight construction, the thermal and acoustic performance of the new floor surpasses that of earlier buildings in college. Since the new floor acts as a roof for the earlier part of Cripps Court, it is hoped that the overall energy performance of the whole court will be improved. The new rooms are so well-insulated that the heating radiators are a fraction of the size of the ones on the earlier floors. The only artificial cooling is in the new seminar rooms, which can be densely populated. Otherwise, in the bedrooms and studies, a passive ventilation system is used, whereby cool fresh air enters through the windows, and stale hot air is discharged through high-level ventilators in the ceilings, the flow being driven by the chimney effect.

The official opening ceremony was held on Friday 19 October 2007. The benefactors, and representatives from all the design team companies and contractors, were invited. An engraved glass plaque, recording the names of those benefactors whose contributions assisted with the new extension, was unveiled by Mrs Catherine Thomas. Two engraved glass windows, celebrating the life of Stephen Thomas, were widely admired by the visitors.