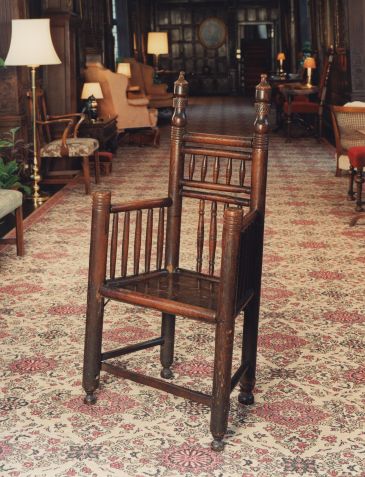 This is probably an early 16th century chair, and so of the same historical period as that when Erasmus of Rotterdam stayed in Queens’ College.

However, we can offer no evidence as to (a) whether Erasmus himself ever used this chair, (b) how the name of the chair might have originated, (c) when the chair arrived in college. Nothing of its provenance or history is recorded. The chair is an example of a design known as a Board-seated Turned Chair.

The primary wood is ash, and that is highly unusual among such English chairs, most of which are made of elm or yew. The turnings are severely plain compared to those of Welsh chairs, and they relate closely to those displayed by Dutch chairs illustrated in sixteenth- and seventeenth-century paintings and prints. What’s more, the turnings are devoid of the mannerist motifs seen on most Welsh chairs. The towering finials are picked out with systematic gougework that almost never appears in Welsh chairs. … It has suffered a number of losses. The feet were extended 2½ inches (6.35 cm) during the late seventeenth century. The front stretcher, six associated spindles above it, the rear stretcher, and one back spindle are gone. The seat board is a softwood replacement. A later top rail has been added to the back. Iron braces have been added under the seat.
[Trent, 1990, p. 47]

Great chair, probably London or Cambridge, England, 1510–1514. Ash and pine. H. 49″, W. 24⅝″, D. 17″. The seat rails have a large rectangular tenon at one end and a small round tenon at the other. The upper back rail is an addition, the front stretcher is replaced, the feet have been pieced out, and the rear stretcher and six spindles under the front seat rail are missing.
[Trent & Alexander, 2007, fig. 31]