At some point in history, certain rooms reserved for use by Fellows were secured by French night-latches, for which all Fellows were issued with a key.

The three doors known to have been secured in this way were: 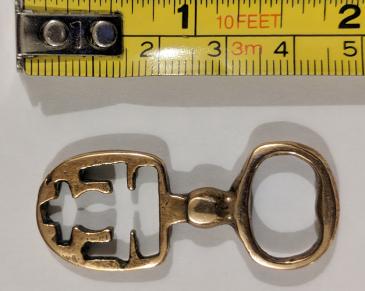 In the photograph can be seen a typical French night-latch key, as issued to Fellows to unlock any of the above doors. As can be seen, the key is physically small compared to other door-keys of the period, and therefore convenient to carry.

The lock was operated by inserting the key into a horizontal slot, then simply lifting the key. Once the cut-outs in the key had cleared a ward inside the lock, then lifting the key would directly lift a finger attached to the back of the inside latch: there was no mechanism inside the lock. The outermost part of the ward was a plate obstructing any attempts to operate the lock with anything other than a key designed to pass around the sides of the plate. 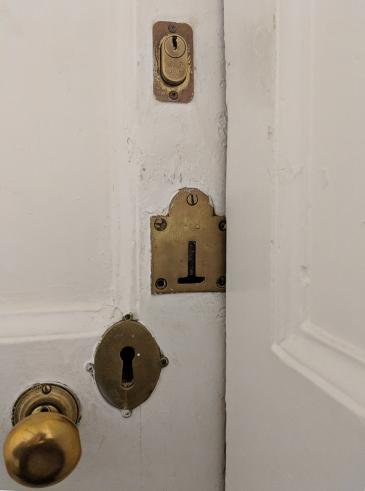 The key would be inserted in the horizontal slot (photo left), and lifted. The latch lever (photo right) had an attached finger which passed through the wood of the door into the rear of the lock. Lifting the key caused the key to lift the finger and thereby the latch.

The brass latch lever seen here appears to be a modern replacement for an earlier version. 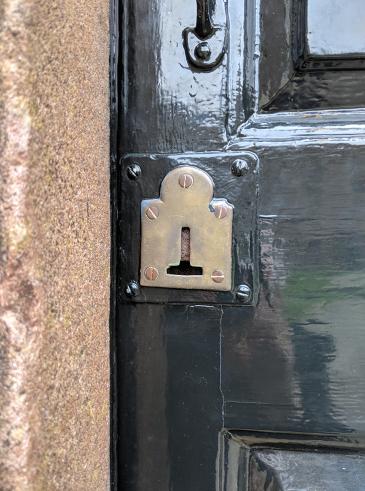 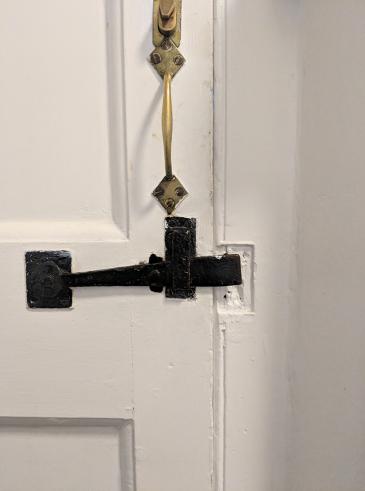 The external door in Cloister Court to the old SCR lobby.

A latch similar to the one seen above, but with a larger iron internal latch, possibly original. The slot cut through the wood of the door for the finger on the back of the latch can be seen.

In the outside keyway (left), the plate obstructing anything other than a key can be seen.

The above two night-latches were replaced by modern cylinder locks sometime after the SCR moved across the river to Cripps Court in 1979.

A similar French night-latch once existed on the door to the Fellows’ WCs in the riverside building of Cloister Court (opposite the old SCR), but this latch seems to have been destroyed when the area was converted to a photocopier room around 2007.