The Fitzpatrick Memorial Hall was a building providing rooms for student activities, including a Junior Combination Room. It was converted in 1936/7 from an earlier building which, at that time, was being used as a college lecture hall, but which had earlier been a stable and coach-house. It was the only building west of the river which escaped demolition before the erection of Fisher Building. It was named in memory of Thomas Cecil Fitzpatrick, President of Queens’ from 1906 until his death in 1931: he had been a great benefactor to the college during his presidency. 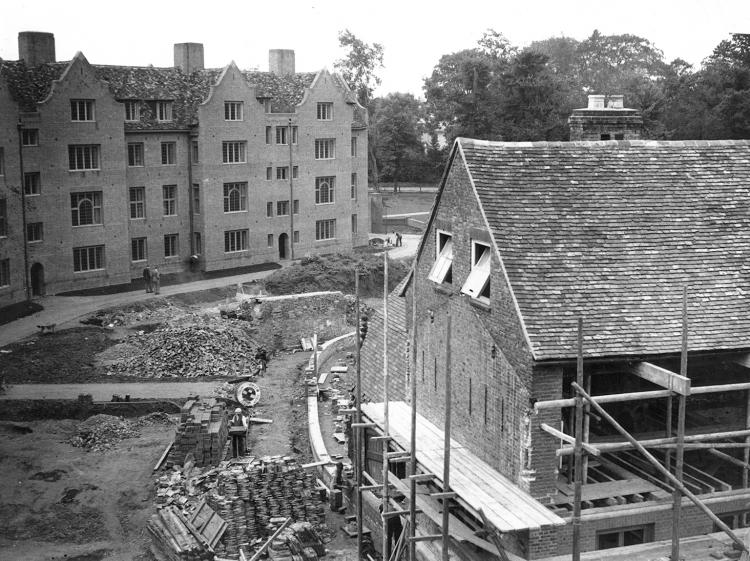 A view of the Fitzpatrick Memorial Hall in 1936, in the process of conversion from its earlier condition, with Fisher Building newly-built behind. The south wall bears the scars of the adjacent toilet block and bicycle shed which had been demolished in 1935. The east-facing wall (towards the camera) was totally reconstructed in the style of Fisher Building: the other three walls were retained but cleaned up and renovated.  The entire oak-beamed open roof structure was retained from the earlier building.

Behind the hall can be seen the beginnings of a new curved boundary wall to the gardeners’ compound, south of the Fellows’ Garden. Beyond that is a fragment of the original straight wall in the process of demolition.

The architect for the conversion was George Carr Drinkwater (1880–1941). 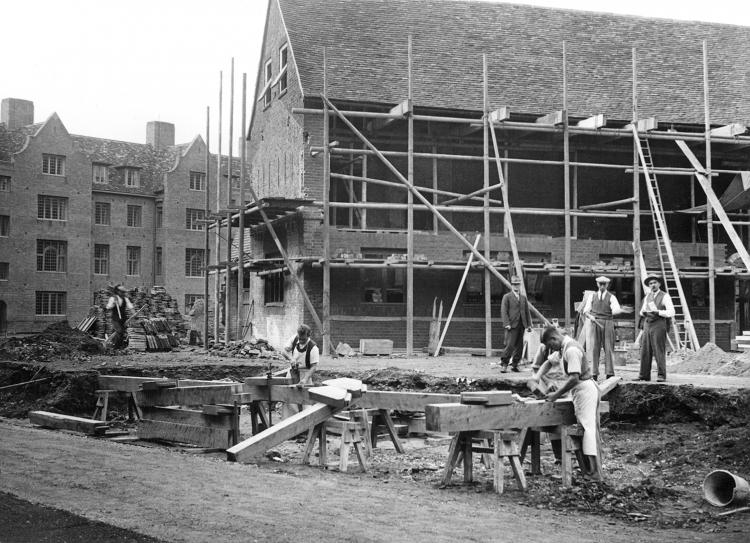 Another view of the same conversion in 1936. The new east wall has been built at ground floor level: the first floor remains to be done. In the absence of a load-bearing wall, the roof structure is being held up by scaffolding.

Note that the contractor’s staff are wearing white shirts, waistcoats, and ties.

The ground level behind the joiners would later be lowered to match that of the path running beside Fisher Building. 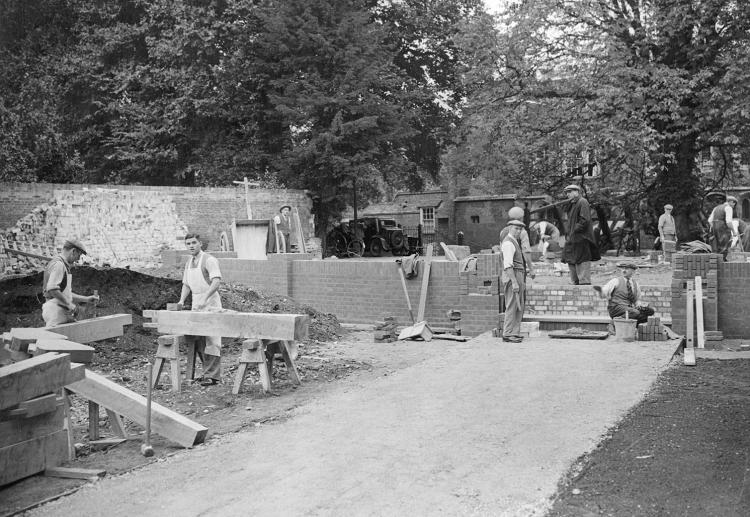 The same scene as above, with the camera position reversed, to show construction of the retaining wall of The Round.

On the left is the south wall of the Fellows’ Garden, with a pile of bricks in front of it.

The ground level beside Fisher Building was artificially lower than the natural ground level of The Round, which was held back by the new retaining wall, with steps to be built where the bricklayer is working. This change of level still exists today, represented by the slope from the Porters’ Lodge down to the entrance to T staircase.

The Fitzpatrick Memorial Hall opened for use as Junior Common Rooms at the beginning of February 1937. 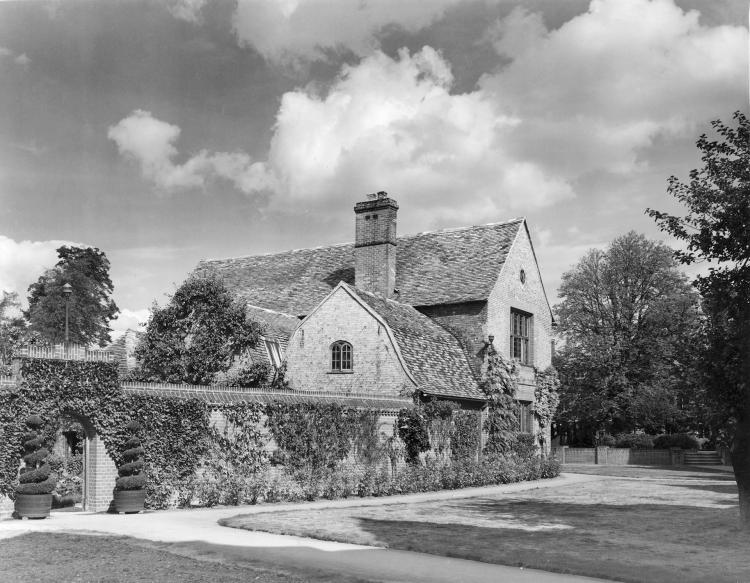 A rear view of the Fitzpatrick Hall and its outhouses in 1948. The ground floors of the three outhouses were gardeners’ accommodation. On the first floor of the right-most (south) outhouse was the Quiet Room, reached from a door beside the fireplace of the upper hall.

Later, around 1959, the upper stories of the other two outhouses were rebuilt and fitted out as the North Room and the Middle Room. The North Room could be entered from an intermediate landing of the staircase to the upper hall. These three rooms could be used for student club meetings, or parties, etc.

The gateway seen on the left was directly in line with the passage through the ground floor of W staircase of Fisher Building. The gate led to the gardeners’ compound and the Fellows’ Garden beyond. 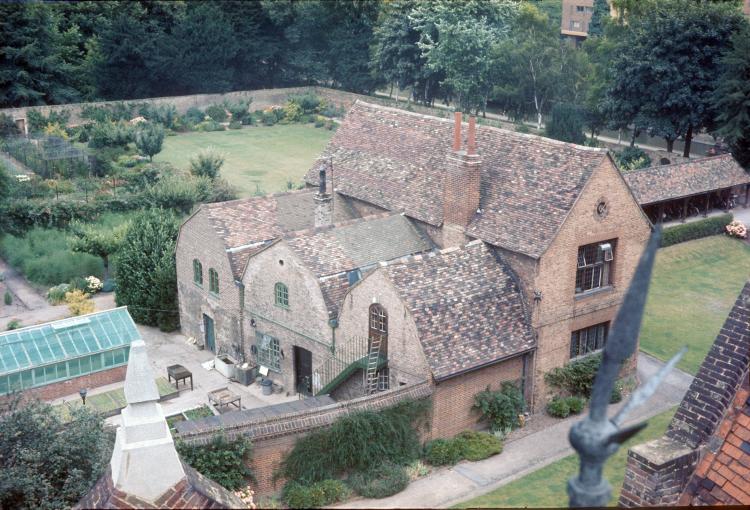 A rear view of the Fitzpatrck Hall and its outhouses around 1971, with the Fellows’ Garden behind.

By comparison with the previous view, it can be seen that the outhouse containing the North Room has been considerably enlarged, and a fire escape has been added to the Quiet Room.

The long low building to the right, reaching towards the bridge, was a cycle shed. 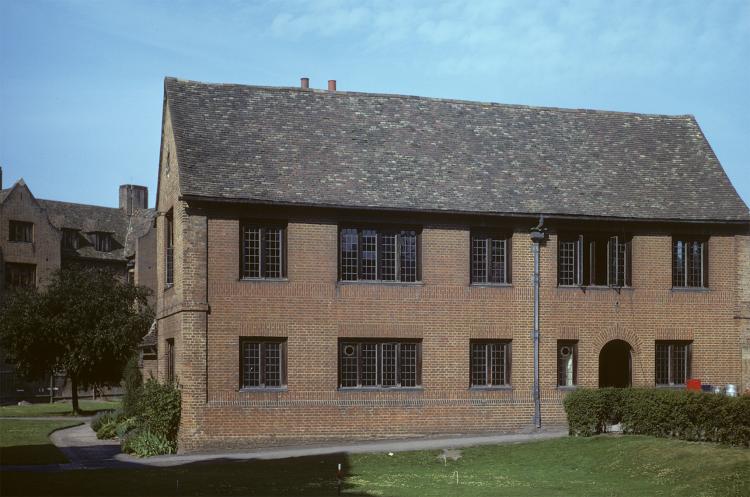 A front view of the Fitzpatrick Hall. Inside the entry arch there was a staircase to the Upper Hall.

The Upper Hall was used most of the time as the Junior Combination Room, supplied with newspapers and TV. It was also the only indoor venue for drama productions by the Bats. It was occasionally used by the college when needing to address an entire year-group, such as inductions for freshers.

The Lower Hall was a games room, principally table-tennis. In 1969, it became the first college bar. 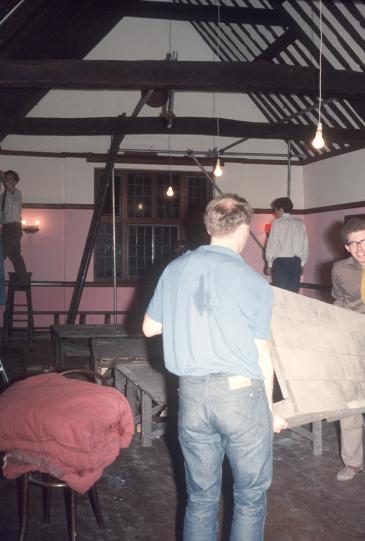 A view of the upper hall of the Fitzpatrick Hall, showing the oak-beamed open roof, retained from the pre-1937 building. The window seen in the centre was in the south wall, facing V staircase of Fisher Building.

In progress is a late-night Bats get-out after the Michaelmas Main production of 1967. For such productions, the upper hall was converted to a small theatre, and the JCR furniture moved down to the lower hall. A stage was constructed from rickety old wooden rostra, which, between shows, rotted gently in the disused outdoor Fives Court. Temporary scaffolding structures were erected in the hall, from which to suspend house tabs, theatre lighting, and the set.

The only access to the stage (other than walking through the audience) was through the door to the Quiet Room, on the far right. The sound and lighting desks were in that room. The Middle Room, and perhaps the North Room, were taken over as dressing rooms. 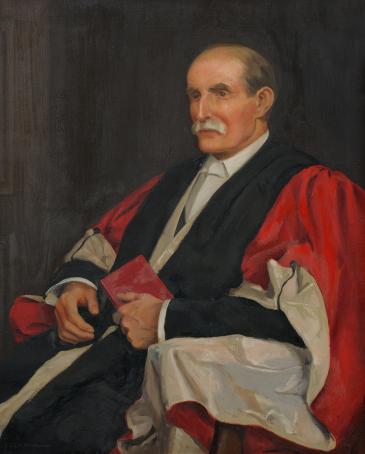 In 1946, although Dr Fitzpatrick had died in 1931, a new portrait of him was commissioned by his widow Anne Rosa née Cook, and presented to the College to be hung on the staircase of the Fitzpatrick Memorial Hall. The artist was Bertram Le Quorice Hattersley Winterton (1904–1985).

Dr Fitzpatrick was depicted holding a little red book. At some point during the years of student unrest 1968–72, the portrait was defaced by writing on the book: The Thoughts of Chairman Mao.

The Fitzpatrick Hall and its outhouses were demolished in the summer of 1973 during site clearance for the erection of Phase 2 of Cripps Court.

The building name Fitzpatrick Hall was transferred in 1989 to the new Multi-Purpose Hall in Lyon Court, erected as part of Phase 3 of the Cripps Court development.