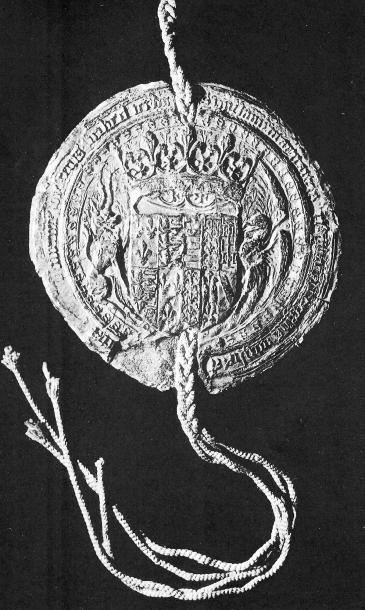 This seal is attached to Letters Patent of Queen Margaret, founding a college by the name of The Queens College of Saint Margaret and Saint Bernard, for one President and four Fellows, dated 15 April 1448. The seal is about 4 inches in diameter. It shows the arms of King Henry VI and his queen, Margaret of Anjou, crowned, with supporters of an antelope (as used by her husband Henry) and an eagle (as used by her father René). The inscription reads:

Note that, in Margaret’s arms:

These points settle a number of heraldic questions which are discussed further in the page on the heraldic arms.

First seal of the Queen’s College of St Margaret and St Bernard, 1448 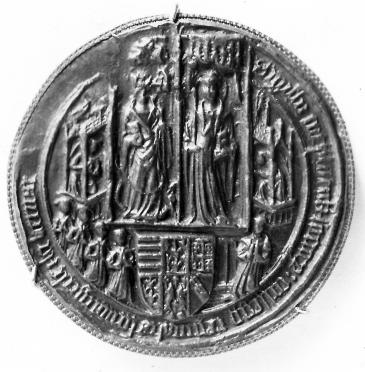 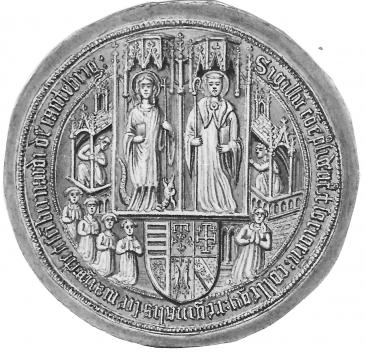 The first seal of Queens’ College, made in 1448, no longer survives, but a wax impression of it survives in the British Library. It is about 2¼ inches in diameter. On it, beneath triple canopies, appear St Margaret, holding a book, standing on a dragon, whose head she pierces with her cross staff; and St Bernard, holding a pastoral staff and a book. On either side is an adoring angel in a penthouse. Below, kneeling, are the four Fellows on one side, and the President on the other, with the arms of Margaret of Anjou between, which we now take to be the arms of the college. The inscription reads:

An impression of this seal is known as late as 1470, well after Elizabeth Woodville assumed the patronage.

Some heraldic points are to be noted:

These are consistent with the arms of Margaret in her seal above, and constitute the evidence for those particulars in the current arms of the College, despite their omission in the wording of the 1575 grant of arms from Robert Cooke. The scale of the arms on the seal is too small to verify whether, in the quarter for the Duchy of Bar, the barbels’ mouths surround the foot of the cross crosslet above (as seen on the arms of Margaret’s father René, and on her own above), but the photograph of this seal is at least not incompatible with that. 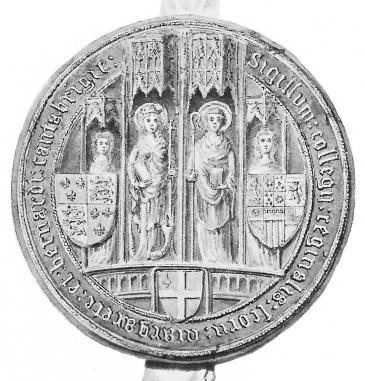 The matrix of this seal no longer survives, but one wax impression of it is known, from 1477. It is 2½ inches in diameter. As in the first seal, St Margaret and St Bernard appear beneath triple canopies. At each side appears a canopied angel(?), bearing, on the viewer’s left, the arms of England and France (King Edward IV), and, on the viewer’s right, the arms of Elizabeth Woodville. At the base appear arms looking identical to those of the City of London. The inscription reads:

The presence of the arms apparently of the City of London have caused previous authors to leap to all sorts of conclusions: some dismiss it as an error on the part of the engraver [1894 p. 313], while others go the extreme of declaring that the college bore the arms of the City of London at some point [1897 p. 375n; 1951 pl. 13]. A more recent cunning suggestion [1985 p. 62] is that these arms represent Elizabeth Woodville in her capacity as a Sister of the Fraternity of our Lady of the Skinners’ Company, in which she was enrolled around 1472. At that period, the Skinners used the arms of the City of London, before obtaining their own. [As a curious footnote, Margaret of Anjou was also enrolled as a Sister of that Fraternity around 1475, during the later years of her captivity following the death of King Henry VI].

Given that the previous seal had been in use as late as 1470, but this seal was in use by 1477, one may speculate that the event which precipitated the need for this new seal was the granting by Elizabeth Woodville of the first statutes of the college in 1475.

An inventory of the college silver taken in 1544 records:

The college did not exist during the reign of King Richard II, and the boar was a symbol associated with Richard III (king 1483–​5) rather than Richard II. So, we assume that the abbreviation sc̃di for secundi (second) is a mistake for tertii (third). The seal matrix does not survive, and no impression of it has ever been found, so it is not known whether its appearance was anything like the boar’s head badge now frequently seen around college. Nor can we be sure that it was ever used as a seal of the college.
[Seals of the Colleges and of the University of Cambridge, by William Henry St John Hope, in Proc. Soc. Antiquaries of London (2nd Ser.), 10, pp. 242–​244]

This seal is known by its wax impressions: the matrix does not survive. The earliest known impression dates from 1494. It is described as a poor and inaccurate copy of the second seal, above, with a slightly different inscription: 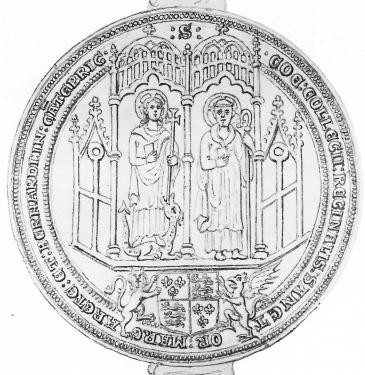 The matrix of this seal does not survive. The account book of the college, Magnum Journale, records the purchase of this seal in April 1529, and a wax impression of it is known from 1534–​5. It is circular, 2½ inches in diameter. The saints Bernard and Margaret are depicted beneath domed canopies. At the base are the royal arms, supported by a lion and a dragon. The inscription reads:

Once again, just as with the second seal, the presence here of the royal arms led previous authors to speculate that the college might have had authority to bear the royal arms as their own.

[For unknown reasons, Browne & Seltman describe this seal as About 1500. The Seal given by King Henry VII] 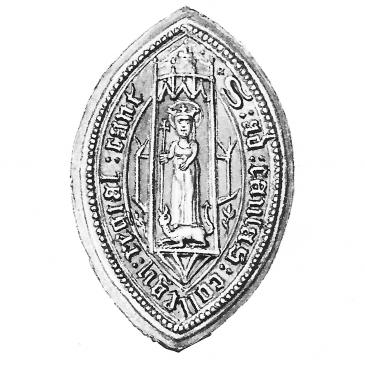 The matrix of this seal does not survive. A wax impression is known dating from 1570, but Searle thought this seal might date from 1508–​19. It is a pointed oval, 1¾ inches long. Only St Margaret is shown. The inscription reads:

An ad causas seal was used for routine business that did not require the authority of the common seal of the corporation: just as later generations might have used a rubber stamp.

[For unknown reasons, Browne & Seltman describe this seal as About 1620. The Seal of the time of King James I] 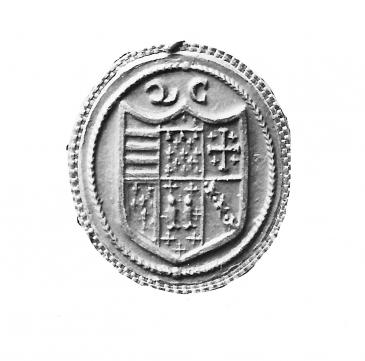 This small seal was said by Hope to date from circa 1580, but he gave no authority or evidence for that date. Browne & Seltman describe it as About 1655. The Seal under the Commonwealth, again with no evidence or authority. It is oval, about 1⅛ inches long. It shows the arms of the college, as granted in 1575 with the addition of a border, and an inscription QC.

Hope added It is now [1885] kept in the buttery and used to seal certificates. If that was the case, it might be that this seal did not serve as the corporate seal of the college. The present whereabouts of the matrix are unknown. 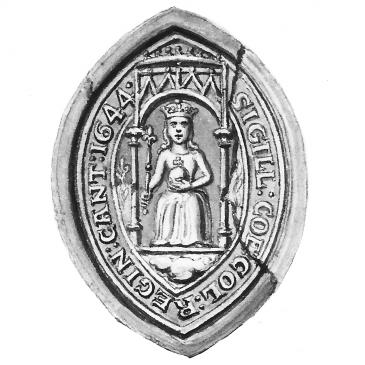 This illustration is a drawing of a reconstruction of this seal, from a single known damaged wax impression dated 9 Chas. II (translating this date into calendar years presents some difficulties, as, if reckoned from the death of his father, as was conventional, it would pre-date the restoration). It is oval, about 1⅞ inches long. It is the first seal of this college to be clearly dated (1644), and the first to be inscribed in roman lettering rather than gothic. The patron saints no longer appear, and a single symbolic queen is shown, holding orb and sceptre, and crowned. If we accept the reconstruction, then the inscription reads: 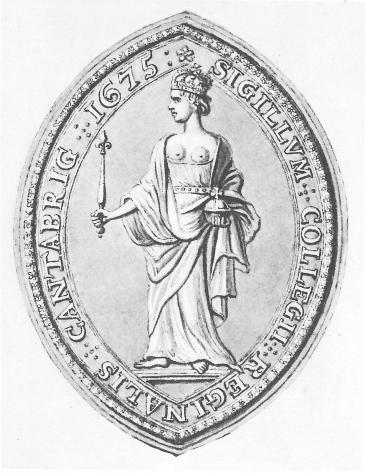 The seal used until the late 20th century. A symbolic queen is shown standing, holding orb and sceptre, and crowned. It is oval, 3 inches long. The matrix survives. The inscription reads:

At some point in the 20th century, a paper-press seal was acquired. The matrix was copied from the 1675 one (including the date), but made smaller. This is the seal used today.