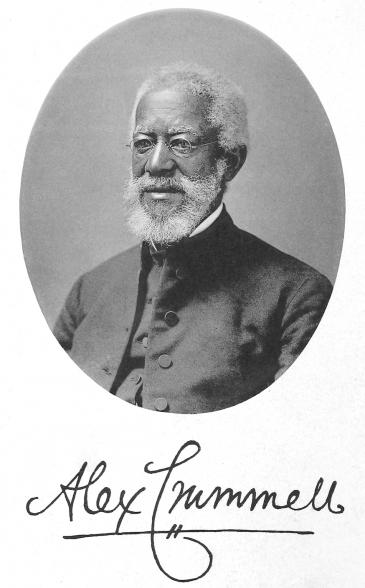 In his name, we have now started The Alexander Crummell Master's & PhD Scholarships. These are exciting new opportunities for UK-based students who would not otherwise have the means to consider continuing on to postgraduate level study. They are "full ride" scholarships i.e. fees and maintenance costs.

Alexander Crummell (1819–​98), a leading figure in the movement for black rights, was active in that cause at different times in the United States, Britain and Africa.

He was born, free, in New York City (slavery was practised in the southern states of the USA until much later) and educated mostly at institutions run by black clergymen and abolitionists. After graduating from Oneida Institute in 1839, he spent several years fighting against racial prejudice in his efforts to become an ordained minister of the Episcopalian Church — he succeeded in 1844 — and then in trying to secure equal recognition within the church establishment. In 1847, on the advice of influential friends, he sailed to England to raise funds to build a church for his poor black congregation in New York.

He arrived in England, in his own words ‘full of earnest purpose and bright hopes’. Introductions from his American friends brought him into contact with politicians, churchmen and literary figures; he was received everywhere ‘with favor and courtesy’, was invited to preach in several places, and raised the equivalent of over $8,000 for his new church. However, his efforts were interrupted by ‘fits of illness’, so that friends suggested ‘that I should retire for a season from over-work, and become a student in the University of Cambridge’; he enrolled at Queens’.

After graduating in 1853, he spent many years in Liberia, a nation newly-created specially for former slaves. There he worked as schoolmaster, lecturer, priest and missionary, and, as a ‘public Teacher’ and ‘censor’ of the nation’s faults when called upon, as he often was, to give his opinions ‘concerning national life’ and to make public addresses. He returned to the United States in 1873 and was a minister in Washington DC for over twenty years at St Luke’s Episcopal Church, now a US national monument; in the year before his death he helped to found the American Negro Academy.

His considerable influence as a writer, teacher of moral ideals, and opponent of racial persecution is well recognised today in the United States. Over forty publications by him are listed; one of his pamphlets was said to have sold half a million copies. He was a tireless worker for black rights and, despite many reverses, constantly optimistic. His inspiration was deeply Christian, and strongly moralistic in a typically mid-Victorian way, rather than political. He worked for a moral revolution based on philanthropy, honesty, self-restraint and hard work; industry and education were the principal means by which black people were to conquer racial injustice, raising their own self-respect and giving the lie to notions of white superiority.

Very little is known about Crummell’s Cambridge career. According to his own account,[Jubilate, 1894, p. 16] he was entered at Queens’ in 1851, but this is clearly a mistake: J.A. Venn’s biographical register of Cambridge alumni [Alumni Cantabrigiensis, Part 2 Vol. 2, 1944, p. 193] claims that he was admitted on 22nd June 1849, and although the college’s admissions register has since been lost, the university archives show that he matriculated in the Michaelmas term of 1849. There is no further reference to him in the college archives until he took his BA in 1853 (in those days, the BA course took nearly four years). W. Wells Brown, a fellow-countryman and escaped slave who visited England at about the same time, wrote in September 1851 that he had visited Crummell at Cambridge a ‘few months since’, but gave no further details. Crummell’s own account is scarcely more forthcoming: he states merely that ‘I was often in the hands of doctors. Not seldom I fell into a state of discouragement and despair, on account of my health. Now and then my studies were interrupted’.

But there is an anecdote from the very end of his time there. Crummell may have been the first black recipient of a Cambridge degree, and at the degree ceremony in the Senate House ‘A boisterous individual in the gallery called out, “Three groans for the Queens’ n*****” … A pale slim undergraduate … shouted in a voice which re-echoed through the building, “Shame, shame! Three groans for you, Sir!” and immediately afterwards, “Three cheers for Crummell!”. This was taken up in all directions … and the original offender had to stoop down to hide himself from the storm of groans and hisses that broke out all around him’ (Crummell’s champion was E.W. Benson who was to become Archbishop of Canterbury). [The Life of Edward White Benson, by A.C. Benson, 1899, Vol. 1 p. 109]

Crummell’s reasons for choosing Queens’ as his college are not easy to find. There was no formal admissions procedure then, and personal contacts were all-important. Crummell referred to ‘a personal interest’ which arose on his behalf, ‘unsolicited, nay, unthought of by myself.’ He did not reveal who these people were, but we know that he was well connected. Several of his particular friends and patrons were from the evangelical wing of the Church of England. Although nineteenth century evangelicals tended to be Tory in their politics and opponents of parliamentary and religious reforms, the movement had supported William Wilberforce’s campaign against slavery. Queens’ in the early nineteenth century was famous — or, in some circles, notorious — for its marked evangelical character created by the dictatorial Isaac Milner (President, 1788–​1820), who was a close friend of Wilberforce. This tradition persisted in the college into the middle years of the century, although the first signs of growing movement towards higher churchmanship are apparent in the 1840s. One of the friends listed in Crummell’s account was Henry Venn, a prominent evangelical of the period who had been a Fellow of Queens’ in the 1820s; another was the Methodist and distinguished antiquarian T.H. Horne, who had compiled a catalogue of the college library when Venn was a Fellow. These men may not have introduced Crummell to Queens’ themselves, but they were part of a widespread network of personal contacts which embraced both him and the college.

Crummell is said to have been one of the finest black American writers before the twentieth century. It has also been claimed that to a large extent this was the result of his Cambridge education: perhaps it is true, but it is a rather facile assumption. Any contribution that Cambridge may have made to his development as a thinker and prose stylist probably came from extra-curricular activities, for Crummell, in common with about two thirds of his student contemporaries, read for a pass degree only, which was not a very demanding course. And his life at Queens’ remains a mystery. Colleges are all too prone to claim credit for the achievements of their famous alumni, and it would indeed be presumptuous of Queens’ to do so in Crummell’s case, but it seems a legitimate function of a college Record to remember the distinguished career of a former member who might otherwise, in this country at least, be undeservedly neglected.

I am grateful for the considerable assistance given me by Dr D. Nicol from Sierra Leone, Honorary Fellow of Christ’s College, who first drew my attention to Crummell and has supplied me with a great deal of information on his life and work.