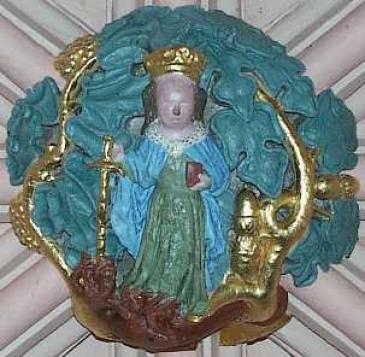 St Margaret was a popular saint in the late middle ages, but probably a mythical figure. She is said to have survived a number of tortures, including being eaten alive by Satan in the form of a dragon.

She is often depicted in art as trampling on a dragon, and can be seen thus on the vaulted ceiling of the gate in Old Court (probably an original 1448 representation), and as a statue (circa 1930 ??) in the new Chapel.

We do not know why she was adopted as a patron saint of Queens' College, other than the obvious association of her name with that of our first foundress Queen, Margaret of Anjou. 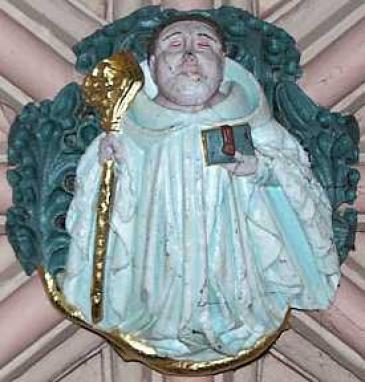 In 1113 he joined the new monastery at Cîteaux (from which came the Cistercian Order). In 1115 he founded the Abbey of Clairvaux, and was Abbot there for the rest of his life. Clairvaux prospered, and gave rise to 68 daughter houses. Although not an actual founder of the Cistercian Order, he is treated as if he were, because of the success of Clairvaux.

Andrew Dokett, before becoming first President of Queens' College in 1448, had been principal of St Bernard’s Hostel in Cambridge, situated beside St Botolph’s Church. The College was seen as the logical successor to St Bernard’s Hostel, and the College was originally going to be called St Bernard’s College, until the patronage of Margaret of Anjou led to it being founded as Queen’s College. The connection with St Bernard was retained by naming him as a patron saint.

St Bernard can be seen with his beehive as a statue (circa 1930 ??) in the new Chapel. He is also depicted with a crozier on the vaulted ceiling of the gate in Old Court.