A former Queens’ Mathematics scholar and captain of Football has generously donated a Mathematics Fellowship to the College. David Moore (1983) was supervised in Maths by, amongst others, Dr John Green (1963) and Professor Richard Weber (1974).  David commented “I’m very grateful for the education I received at Queens’.  The Maths Tripos is very challenging, and I couldn’t have succeeded without excellent in-college supervisions.  I want to help ensure the continued high quality of Maths teaching at Queens’ in the future, so that others may have the opportunities I had.”

David came up to Queens’ from the Royal Grammar School, Guildford, where he was a student of Mr A.J.W. Thorn (Queens’ 1967).  At Queens’ he became a Foundation Scholar and received the Openshaw Prize for Maths.  He also captained the Queens’ College Football Club and played regularly for the Falcons (Cambridge University 2nd XI).  After working for the investment bank Morgan Stanley for two years in London, David moved to the United States and obtained a MBA from Harvard Business School.  He then worked a further 20 years for Morgan Stanley in New York, eventually running the Interest Rate business and becoming a member of the Management Committee.   He also spent three years at Bank of America Merrill Lynch in New York in a similar role.  David is married to Casey and they have two young children, Claudia and Peter, and they reside in Manhattan.

In commenting on his path after Queens’, David said “When I started my career in the mid-1980s, investment banking was just starting to evolve from a clubby sort of world into the highly quantitative business we see today.  I was fortunate that I had the mathematical background just when it was needed, and I think quantitative skills will continue to be in strong demand by the financial industry going forward.” 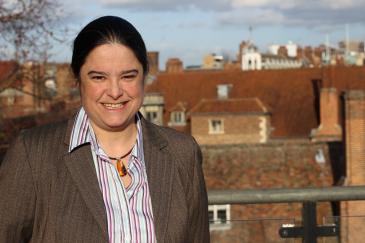 Dr Julia Gog is the inaugural David N. Moore Fellow in Mathematics. Her prize-winning work was featured in a recent edition of The Bridge magazine. She is the Director of Studies in Maths at Queens’ and Reader in Mathematical Biology in the Department of Applied Mathematics & Theoretical Physics (DAMTP).