We are delighted to announce the launch of The Angevin Talks at Queens’ hosted by Anna El-Erian.

The Angevin Talks, beginning mid-February 2021, will host a diverse range of eminent speakers, appearing in an informal setting. All members of the Queens’ community will be invited to join the talks. 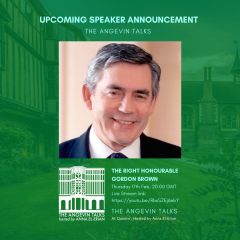 The Right Honourable Gordon Brown served as Prime Minister of the United Kingdom from 2007 to 2010, Chancellor of the Exchequer from 1997 to 2007 and as a Member of Parliament in his home county of Fife, Scotland, from 1983 to 2015.

Mr Brown is the United Nations Special Envoy for Global Education and is a passionate advocate for the rights of children and believes every girl and boy deserves the opportunity of an education, learning and skills for the future. Since September 2021 he also serves as WHO Ambassador for Global Health Financing.

Mr Brown is Chair of the High-Level Steering Group of Education Cannot Wait, the education in emergencies fund; Chair of the Inquiry on Protecting Children in Conflict; and serves as Chair of the International Commission on Financing Global Education Opportunity.

Mr Brown is the author of several books including Beyond the Crash: Overcoming the First Crisis of Globalisation, My Scotland, Our Britain and My Life, Our Times and most recently Seven Ways to Change the World (Simon & Schuster, June 2021) 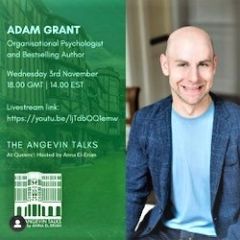 Adam Grant has been Wharton’s top-rated professor for 7 straight years. As an organisational psychologist, he is a leading expert on how we can find motivation and meaning, and live more generous and creative lives. He has been recognised as one of the world’s 10 most influential management thinkers and Fortune’s 40 under 40. He the #1 New York Times bestselling author of 5 books that sold millions of copies and have been translated into 35 languages: Think Again, Give and Take, Originals, Option B and Power moves. Adam hosts WorkLife, a chart-topping TED original podcast. His TED talks on original thinkers and givers and takers have been viewed more than 30 million times.

The talk will be a hybrid event with Anna El-Erian hosting Adam Grant remotely. All Queens’ members (current and alumni) are invited to watch the livestream of the talk and ask questions on YouTube: https://www.youtube.com/watch?v=ljTdbQQ1emw&t=1136s

Dr. Moyo is a pre-eminent thinker, who influences key decision-makers in strategic investment and public policy. She is a top-tier opinion former and trusted advisor on Macroeconomics, Geopolitics and Technology themes. Dr Moyo is a co-principal of Versaca Investment, a family office focussed on growth investing globally. She serves on a number of global corporate boards including: 3M Corporation, Chevron and Conde Nast. Dr Moyo worked at the World Bank and Goldman Sachs for nearly a decade. She is the author of four New York Times bestselling books, most recently, “Edge of Chaos: Why Democracy Is Failing to Deliver Economic Growth – and How to Fix It,”(2018).
Dr. Moyo's newest book, "How Boards Work - And How They Can Work Better in a Chaotic World" is scheduled to be published in Spring of 2021.

Watch a livestream of the talk via YouTube https://www.youtube.com/watch?v=9wHe9ONteQY

Professor Spence earned his Ph.D. in Economics at Harvard. He was awarded the John Kenneth Galbraith Prize for excellence in teaching and the John Bates Clark Medal for a "significant contribution to economic thought and knowledge." In 2001, Professor Spence received the Nobel Prize in Economic Sciences for his work in the field of information economics. He currently holds many prestigious positions.

Watch a livestream of the talk via YouTube https://youtu.be/Wz6fZi9rFtA 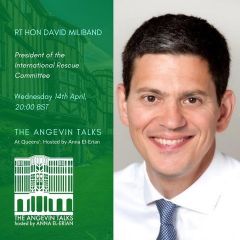 David Miliband is the President and CEO of the International Rescue Committee. David has had a distinguished political career in the United Kingdom. His accomplishments have earned him a reputation, in former President Bill Clinton's words, as "one of the ablest, most creative public servants of our time”.

In 2016 David was named one of the World’s Greatest Leaders by Fortune Magazine.

Watch a livestream of the talk via YouTube https://youtu.be/MuYJn4hucmk 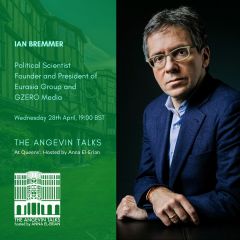 Ian Bremmer is a political scientist who helps business leaders, policy makers, and the general public make sense of the world around them. He is president and founder of Eurasia Group, the world’s leading political risk research and consulting firm, and GZERO Media, a company dedicated to providing intelligent and engaging coverage of international affairs. Ian is an independent voice on critical issues around the globe, offering clearheaded insights through speeches, written commentary, and even satirical puppets (really!).

A prolific writer, Ian is the author of 10 books, including the New York Times bestseller “Us vs Them: The Failure of Globalism” which examines the rise of populism across the world. He also serves as the Foreign Affairs Columnist and Editor at Large for Time magazine. He currently teaches at Columbia University’s School of International and Public Affairs and previously was a professor at New York University.

Watch a livestream of the talk via YouTube https://youtu.be/IPwFdXwTv94

Jared Cohen is the founder and CEO of Jigsaw, which is the research and engineering arm of Google. He also serves as a Senior Fellow at the Council on Foreign Relations. Previously, he was Google’s first Director of Ideas and chief advisor to Google's CEO and Executive Chairman Eric Schmidt. From 2006 to 2010, he served as a member of the Secretary of State's Policy Planning Staff and as a close advisor to both Condoleezza Rice and Hillary Clinton.

Watch a livestream of the talk via YouTube https://youtu.be/3LHgL_lqOJk

Queens' Life Fellow Dr Robin Walker has been kind enough to provide some background on the name chosen for the talks - 'Angevin'. Watch the video below to hear Dr Walker explaining the origin of the word 'Angevin' and its connection to Queens'.

James Smith and Sneha Baptista, two current MCR members completing their MSt Architecture, kindly designed the logo for the Angevin Talks. Here is what they each said about the thought process behind and significance of the logo’s design.

“With the aim to create something quintessential to Queens’ College, we took inspiration from the President’s Lodge - the setting for the Angevin Talks. The result is a culturally rich and adaptable logo embodying the architectural language of the lodge with its unique and historic facade and cloisters that have welcomed many great speakers to the University. The logo provides a strong identity for the speaker series hosted by Anna El-Erian.” - Sneha Baptista

“I was pleased to have been given the opportunity to design this logo and collaborate creatively with James Smith on something that may identify with the university beyond my time here.” - Sneha Baptista

"We worked together to create a logo that encompassed the unique architecture of Queens’ College’s President’s Lodge, as the only extant half-timbered building in any Cambridge College. Conveying the beauty at the heart of Queens’ that has become the forum to host this series of exciting and insightful talks.”- James Smith