Dr Jenny Leivadarou (2013) left Queens’ this summer after six years of study as an MPhil and PhD student – based in her ground floor room in Fisher Building’s W  Staircase. It became a home for her. She said that such a period of study would not have been possible other than at Queens’ and particularly not in her native Athens, or Greece generally, due to a lack of facilities for people with disabilities. 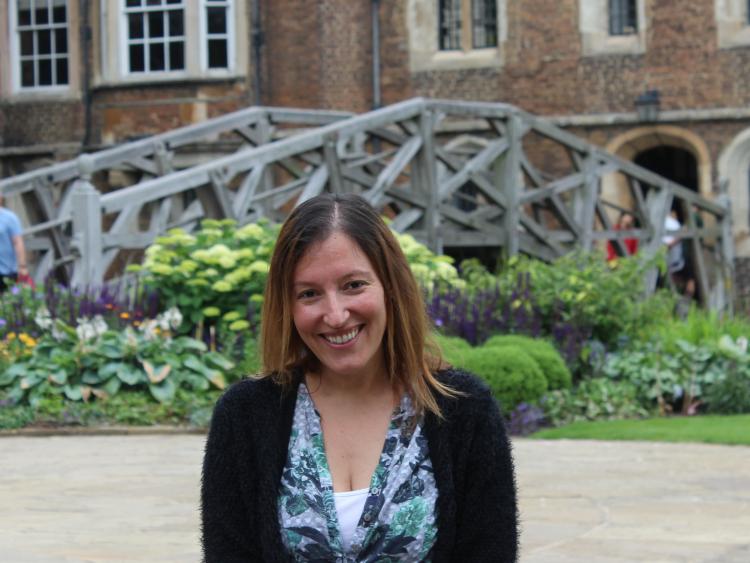 Arriving in 2013 at the age of 28, having worked in Greece in urban development, Jenny was advised by the University’s Disabilities Resource Centre to choose Queens’, simply because it was opposite the Land Economy Faculty where she would study. She never went inside the Faculty itself due to the lack of suitable wheelchair access but, fortunately, her lectures were in Mill Lane which is fully accessible.

When she switched to studying for a Mathematics PhD, she met up with the great Stephen Hawking, who had already ensured that the DAMPT Faculty was accessible. Jenny took a bus every day from outside Queens’ which dropped her off at the Maths Faculty off Grange Road.

Queens’ added disabled facilities to Jenny’s room including emergency lighting. But as a member of the MCR, she could not access the postgrads’ Woodville Room until a donor (Gifford Combs, 1983) came forward and paid for disabled facilities via BB staircase in 2016. The Cripps Foundation had generously funded ramps on the ground floor of Cripps Court in 2007.

Nothing stopped Jenny whilst at College: she was the first person in a wheelchair to be President of the MCR and the best student caller on the Telephone Campaign two years in a row. She travelled to Australia for research and to New York to work at the UN for four months in the Department of Social & Economic Affairs.

Now Jenny aims to work in Greece and get her own apartment close to her job. She is happy to be an ambassador for people with disabilities thinking of applying to Queens’ and Cambridge more widely.

If you are considering applying to Queens' and would like to talk to Jenny about Queens' provision for people with disabilities, please contact the Alumni Office who can put you in touch.