G.F.Bodley and the Chapel – Article from the Queens’ College Record 1992

The centenary of Queens’ College Chapel is well worth celebrating, because G.F.Bodley was a great architect and the Chapel is one of his major works. Indeed, there’s no better place than Cambridge to celebrate his achievements: his work here spans the entire half-century of his career, and nowhere else did he undertake so many and varied commissions, ranging from All Saints, Jesus Lane, one of the key church buildings of the nineteenth century, to Bodley’s Buildings at King’s by the River.

The Chapel is the climax of a thirty-year partnership between Bodley and Queens’ which had begun in 1858 when Bodley, then only thirty years old, had started work on transforming the old Chapel. It continued through the 1860s and 1870s with his work with William Morris on the Hall, and it was in 1886 that Bodley returned to begin designing the new Chapel in Walnut Tree Court.

Bodley was a supremely tactful architect. His Chapel fills Walnut Tree Court but does not overwhelm it. It is essentially a private chapel in a garden, not a public chapel in an open space. Although the building is rectangular, it is not symmetrical (an article of architectural faith with Bodley). Its red brick and stone dressing complement the adjoining buildings. The east end is set back obliquely from Queens’ Lane, and the west end has none of the ostentation of its contemporary, Selwyn College Chapel. The west window is relatively small, because it needs only to light the ante-chapel. The windows of the north and south aisles are all placed high under the eaves, to give maximum light inside the building; this is a typical Bodley trait. So too are the doors: each one (even the small sacristy door) is given an individually-designed and hand-forged handle; and the key-hole escutcheons, a shield surmounted by a crown, are another Bodley signature. Only the main entrance, the south doorway, has any elaborate carved stone decoration – but again there is a complete lack of ostentation. 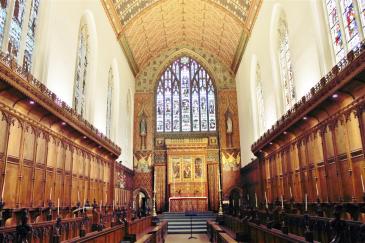 The interior of the Chapel is textbook Bodley: dramatic yet restrained; colourful but not gaudy. The eye is immediately led to the sanctuary and to the altar raised up on no fewer than seven black and white marble steps. All the colour of the building is concentrated on the east wall and in the wagon roof with its magnificent painted ceiling. Even the eastern portion of the ceiling is ribbed and embossed in a different, richer way from the rest – just to emphasise the splendour of the sanctuary. By contrast, the north and south walls are plain, offsetting the rich oak of the panelling and stalls. The sheer variety of decoration on the east wall (diaper work, texts, monograms, shields, niches, saints and angels) is startling, but none of it detracts from the reredos whose carved, inscribed and gilded structure rises almost to the level of the window.

It is the finest of all Bodley’s reredoses: the colours (Venetian red, black and gold) are his favourites; and the canopy arches delicately forward to frame both the triptych and the altar itself. The triptych comes from a place and a period that were among Bodley’s main sources of artistic and religious inspiration; in creating a reredos to encase it, he was literally enshrining his own aesthetic and devotional beliefs. The altar is flanked by dossal curtains made from a cloth designed by Bodley: it is called ‘Pine’, and was woven for Watts and Co., the firm of Church furnishers that Bodley had helped to found. The altar frontal is of the same material.

The other essential element of the east end is the window. The tracery is a typical Bodley fusion of Decorated and Perpendicular, and the glass is fine work by Charles Eamer Kempe. The windows on the north side of the Chapel are also Kempe’s, and can be identified by a wheatsheaf rebus discreetly incorporated into each design.

Beneath the windows (those on the south side are from the old Chapel) the stalls also illustrate the vitality of Bodley’s imagination. Running along the canopy on both sides is an intricate vine frieze, and beneath it are small decorative badges of flowers and leaves: there are well over fifty and each is different. Bodley believed with Ruskin in “the principle of following Nature … giving it the tinge of our human thought and our human feeling”. The poppy-head bench ends of the stalls are individually designed, and the arms of the lower stalls are carved to create a unique bestiary of fabulous animals.

If Bodley were to revisit the Chapel today he would recognise and approve nearly every detail of it. In especial, he would welcome the continuing tradition of worship and music, for his clear theme in designing the Chapel was Praise. You can read this everywhere in the building: high on the east wall appear the words Gloria in Excelsis Deo; down the centre of the ceiling Laus and Gloria are repeated; and along the base of the ceiling on each side verses from the Te Deum run like lines from an illuminated manuscript. Finally, and most fitting, Bodley decorated his organ case with the text: Omne quod spirat laudet Dominum (everything that hath breath, Praise the Lord!). 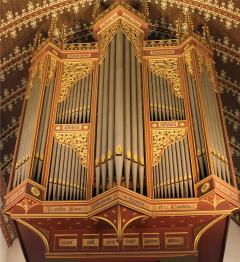 It is in this context that he himself would have wanted to celebrate the Chapel and its centenary.