In June 1937, Haile Selassie, the Emperor of Ethiopia, visited the University of Cambridge.

On the evening of Tuesday June 8th, he attended the Cambridge Union Society, where he formally took up the Honorary Life Membership which had been conferred on him on 1936 May 19. Then he listened to a full debate, which was conducted entirely in French. [Weekly Varsity, Vol. XVII, No. 105, 1937 June 12]

Later, [on June 9th] at the invitation of the President of Queens’ College, his Majesty will visit the college library and inspect the Ethiopic and Amharic books, and will take luncheon with the President and Fellows.
[Cambridge Daily News, Vol. XLVII, No. 15177, 1937 June 7, p. 5]

The people visible in the photograph are, left to right: 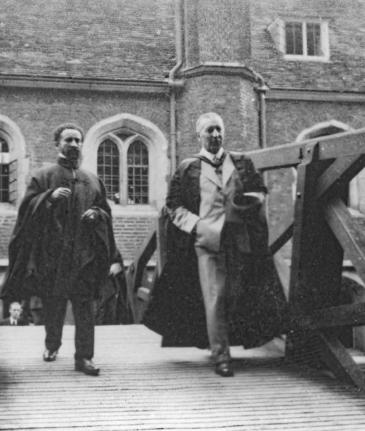 The Emperor Haile Selassie on the bridge, with President Venn, on the same day.

This was not the first time that Haile Selassie had visited Cambridge. Previously, in 1924, he had received the honorary degree of Doctor of Laws under his pre-regnal name of Taffari Makonnen. [Historical Register Supplement 1921–30, p. 97]

The youngest son of Haile Selassie, Prince Sahle Selassie, studied at Queens’ for the academic year 1950–51.

A great-grandson of Haile Selassie graduated BA from Queens’ during the 1970s.