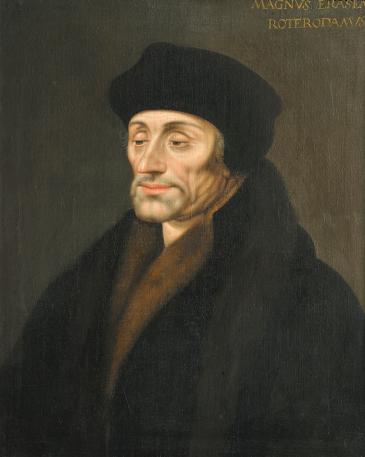 The college acquired this portrait of Erasmus of Rotterdam in 1924, as recounted in the college magazine The Dial:

It was acquired a few weeks since, by private arrangement, from Mr. Coundouris, a wealthy Greek publicist living till lately at Smyrna. Mr. Coundouris had obtained it from a Mr. van der Zett, who had property both in Smyrna and at Rotterdam. It seems probable, therefore, that the painting hails from Rotterdam and possible that it was originally painted there. However that may be, we are assured by Mr. E. O. Vulliamy, Honorary Keeper of the Pictures in the Fitzwilliam Museum, that it is certainly a good contemporary likeness of our greatest alumnus.
[The New Portrait of Erasmus, by Arthur Bernard Cook, in The Dial, No. 49, 1924 Michaelmas, pp. 15–16]

One might have wished for a somewhat better documented provenance.

The college accounts show that the portrait was purchased 1924 December 1, for £225, paid to Adkins. This amount was raised by subscriptions from the President and Fellows.
[General Ledger 1911–28, p. 393]

This portrait now hangs in the Old Combination Room.